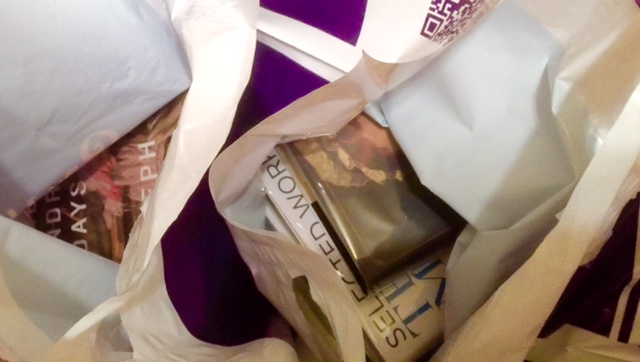 I bought a pair of the same canvas, rubber-soled shoes last summer and they lasted.  In fact, they lasted until a late summer downpour, back in Pennsylvania, at a street fair.  That kind of wet just doesn't ever dry right.  I bought that pair to wear to the company's annual Employee Banquet.  I needed dancing' shoes.  They looked good on me.  The shoes have a Northwest native design, though it does say "manufactured in China" on  a sticker on the soles.  This time, on our Summer Employee Shopping Day, I bought two pair; one red and black, the other gray and blue.  Employee Shopping Day happens twice a year; once before Christmas, and again at the end of our fiscal year.  Our discount goes up 10% pretty much across the store.  It's a good day to buy office supplies, a new umbrella, a new backpack, practical stuff. Those shoes were my one practical purchase.

That same week I bought a new computer after nearly eight years on the old one.  That was a huge purchase for me, but well worth it.  The old one had reached the point were updates were unavailable or unavailing.  It was time.  The bookstore gave me terms.  I'll pay it off in split payments over ninety days.  It was a great deal.  Having this efficient, fast new machine?  That makes me very happy.

The employee discount doesn't fluctuate on the computers -- those terms are set by the manufacturer -- but my discount on books?  Mine went from 30 % to 40 % for the day.  I tried to be restrained. 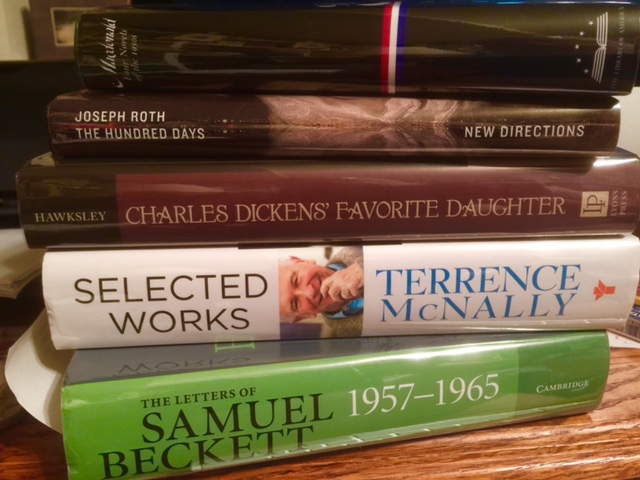 I did not altogether succeed.  Still, it could have been much worse.  That's what I'll tell myself, anyway.

I always buy my latest Library of America titles on Employee Shopping Days, unless I absolutely can't wait (Mencken, Liebling.)  Just the one title this time, Four Novels of the 1950s, by Ross MacDonald. Now, I've never liked the tough guys or West Coast noir.  I prefer my detectives cerebral to febrile; I like a good puzzler and I've never been much for the sunburned gumshoe working the mean streets of LA.  I loath Californian ennui.  However, by all reports, Ross MacDonald is the man.  And to my mind, there is no more sure endorsement of literary merit and longevity than inclusion in the Library of America, still.  (This despite Lovecraft.  I get it, but... ick.)  This volume of MacDonald is the first in a projected series so if I was ever going to read a Lew Archer novel, here's the place to start.

Joseph Roth is a favorite and we are lucky to be living at a time when there are still titles coming into print in English every year or two (there must be a grant at work or something.)  However it's happened, a Joseph Roth novel about Napoleon is probably the only way I can imagine ever reading another book about that supposedly fascinating little bastard.  I will actually read anything by Joseph Roth, even one called without irony, The Hundred Days.

How I missed a new-ish biography of Charle's Dickens' most accomplished child, Catherine Elizabeth Macready Perugini, a.k.a. Kate, I'll never know.  The book was published in the US two years ago!  Never saw it.  Where was I?!  Anyway, Charles Dickens' Favorite Daughter: The Life, Loves and Art of Katey Dickens Perugini, by Lucinda Hawksley was so obviously a book I needed, I bought it, read it and herewith endorse it as a very good thing.  Fascinating woman.  Good book.

Selected Works: A Memoir in Plays, by Terrence McNally sounds a wonderful thing, and I'm glad I bought it, not withstanding.   By which I mean, I'm glad to have a hardcover of McNally's most famous plays, but calling this a "memoir" went from being a clever conceit to a simple cheat.  Brief, new, autobiographical introductions for each play do not a memoir make -- much.  Each introduction was interesting, but I've read more detailed information in a Playbill.  Still, I don't regret the purchase, as I've now read three plays I might not have otherwise.

And the last to be mentioned here would be The Letters of Samuel Becket, 1957 - 1965, the third volume to date of Beckett's letters.  This was the book I wanted most and yet hesitated to buy for the longest time.  The day of the Discount, I must have taken it from the shelf and returned it half of a dozen times.  Why?  Well, it was $50.00.  I'd read a bit in both volumes one and two without buying either.  Why?  Well, they were fifty bucks apiece too.  My thinking was, given the state of things in publishing nowadays, I need only wait a few days (weeks, months, years,) and every volume would end up on a remainder table at the bookstore.  I don't say they still won't, but so far?  Not a one.

As to why I should want the complete, academic edition of Samuel Beckett's letters, what can I say?  Beckett is very much an enthusiasm of my middle age.  I read the usual things in my youth: a couple of the plays, an attempt at the fiction, but I simply did not understand what I read or feel any desire to pursue the matter.  Then, a few years ago, when Everyman's Library started doing the modern and contemporary masters series, they produced a handsome volume of the novels.  No idea why I bought it, other than as part of a series I liked the look of.  Time passed and I picked it up and read at last.  Few books have had a more immediate impact the second go for me than Malloy.  At forty-something and at last, I got it, I just did.  The humor of the thing, the heartbreak, the genius of it, everything I hadn't felt or thought in my callow youth, made immediate, perfect and astonishing sense to me now.  I finished the three novels.  I rented all the filmed plays from the local videophile place and watched the lot.  When the gorgeous set of Beckett's complete oeuvre in English was published, boxed in hardcovers, I bought that too, without batting an eye.

So why would I hesititate to buy the letters as they were published?  I love reading letters.  I learned to love Beckett.  Truth be told, the books are all quite big and all, as I said, expensive.  I thought I'd wait.  Well, I waited and not a bargain copy have I found, remaindered or used.  So, the third volume?  Mine.

I had to tell myself to just buy the thing when I could get it for thirty dollars instead of fifty.  When will that happen again?  (Answer?  Around Christmas time.)  Anyway, now it's mine and while I've read a bit and liked it, it makes me want to go back of course and read the work.  That's something I would do right now, were I not already launched on a similar project of reading Swift.  Beckett will wait.

There may have been more books came home with me that day.  I shall pretend that I don't remember.

What matters to me just now is that I took the gift of that added 10% when it was offered and made myself ridiculously happy for less than a full day's wages (pre-tax, admittedly.)  And what's more, my new shoes are cute too. 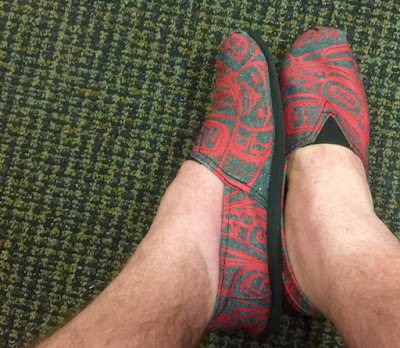