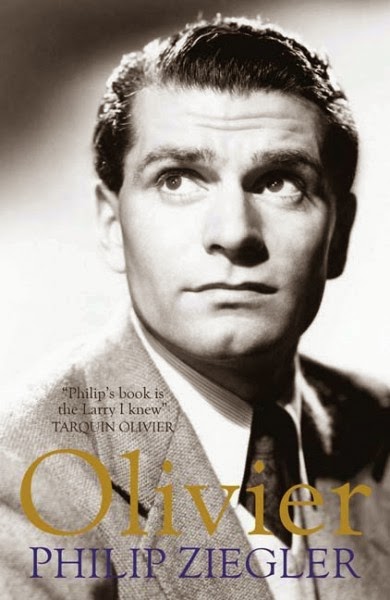 Since retiring from the Foreign Office in 1967, Philip Ziegler has devoted himself to writing history and biography, including a popular history of The Black Death (1969) -- strange as that sounds --that is still read (it's quite good, by the way,) and the official life of Lord Louis Mountbatten (1985), whose diaries he also edited.  More recently, and very much more to my interest, Ziegler wrote an excellent biography of a great English publisher and belle-lettrist, Man Of Letters: The Extraordinary Life and Times of Literary Impresario Rupert Hart-Davies (2005.)  Ziegler's new book would seem to be something of a departure, as the biographer has never before addressed the theater or film, however, the biography he's written, now that I've read it, seems to me very much of a piece with his previous work.  Call it, Tory Pop.

Here we have the greatest classical actor of the last century as stout-fellow-well-met; a nice enough chap of undistinguished origin who, by dint of genius and jolly hard work became a by-God Baron.  Not too shabby for a theatrical-gentleman, what?

I may exaggerate -- a bit.   Ziegler is by no means such a hearty as this, nor is he so bad a writer.  His is, in many ways, a perfectly serviceable life of "Sir." (The name by which even such distinguished actors as Derek Jacobi, himself now a knight, can not help still calling him to this day, despite having been repeatedly encouraged by the older man to call him "Larry.")  A certain deference to Olivier, even after death, is perfectly understandable.  Olivier towered.  It's no bad thing to be reminded why, even, as here, in fairly broad strokes.  From an early age, in nearly every major Shakespearean part, and not a few minor ones, in film as both star and director, as actor-manager of some legendary productions and companies, and eventually, triumphantly as the founding artistic director of the National Theatre Company, Olivier came to be not only the greatest classical actor of the last century, but in the estimation of many in his profession, perhaps the greatest actor who had ever lived.  There can be little question that such an artist deserves the continued interest of not just the public but of historians and biographers as well.  Zeigler's is far from the first biography then, and unlikely to be the last.

So why this book then?  According to the author, he is the first to have full access to the many hours of recorded reminiscences Olivier made with a man hired to ghost-write the official memoirs.  These tapes were never used.  For reasons that remain obscure even after reading Ziegler's book, Olivier fired the ghost and chose instead to write his book unassisted.  The explanation offered is that Olivier had been indiscreet about persons then living and subsequently regretted some of the theatre tittle-tattle he had committed to tape.  Having read both of the books Olivier wrote, Sir's memoirs might have done with a bit of livening up.  It's a point Zeigler makes himself, not without irony.  There's little enough evidence here of indiscretion.  While he's careful to promise no major revelations, it is Zeigler's access to these unedited interviews for his book that's been used to promote the new biography.  Much ado about very little, as it turns out.  To be fair to Zeigler, he does give us more of what Olivier actually said privately of contemporaries, and his wives, but none of it is very shocking.  Moreover, none of it will be unfamiliar to anyone who's read other biographies, theatrical memoirs and or letters of the period. Every English actor of a certain age has at least one or two stories, often unflattering about Sir.  Peter Hall diaries, and Kenneth Tynan's letters, both offer less guarded versions of the Great Man, come to that, and much more in the way of theatrical history from the inside.  Also, considerably more fun.

Still, Ziegler is not wrong in emphasizing Olivier's place in what used to be called, somewhat derisively by those excluded from it, "the establishment."  Olivier simply became, for most of his audience, his fellow thespians and for more than one generation, an institution. That's a remarkable story, that transformation of an actor into a national treasure.  Additionally, his biographer is right, I should think, in seeing the actor's personal taste and character as fundamentally conservative.  A brilliantly inventive and exciting actor, and eventually a tireless administrator, Olivier was always careful to describe himself as neither an intellectual nor a theatrical revolutionary.  He was, first and foremost a man of the theatre, and despite multiple marriages and not a few affairs, otherwise largely unremarkable in his personal tastes and interests.  The honest portrayal of this ordinary man behind the legend is both the strength of this portrait, and it's great weakness; the legendary actor being the only reason we continue interested in the man. A man of the theatre, even, it seems a great fan thereof, Ziegler is not.  As a popular historian, he has perhaps a better grasp of his subject's times than previous biographers, but little command of theatrical criticism or any special gift for the telling anecdote or recreating the lingering glow of a great performance.  On the politics of fame and the vicissitudes of running companies, he does better; revenues accounted, honours noted, reviews reviewed. He traces the career, or the course of his star, so to say then, rather than making much of an effort to explain the dazzling light shed along the way. Celebrity he can describe, as that was a thing of newspaper stories, travel-itineraries, awards and Royal Command Performances.  He is particularly good at Olivier's transformation from prewar matinee idol and movie star into a great patriot with his Shakespeare films during the War. Likewise, the sheer, grinding work of actually making a National Theatre has nowhere been more plainly explained.  Ziegler has a genuine appreciation for the unrecognized, middle-aged Sir, in mac and trilby taking the train to his house in the Home Counties after a jolly hard day at the office, making British theatre great again.  And, if anything, the biographer's sympathetic description of the actor/manager's somewhat reluctant but savvy embrace of the next generation -- as embodied in the person and plays of that "Angry Young Man," John Osbourne -- reinforces this impression of brave, adult forbearance in the face of unrecognizable cultural change.  As it happened, Olivier's star-turn in The Entertainer proved to be one of the peaks of his later career. Doesn't mean a fellow has to like that sort of thing.

Ultimately, this biographer hasn't much patience with anything not a matter of record.  None of that nonsense about Sir kissing Danny Kaye or any of that kind of smutty gossip here.  Well and good, really, if a little adamantly prudish.  Less understandable is the lingering question of why Phillip Ziegler should have been asked in the first place to make this minor Mountbatten out of the great Lord Larry, lion of the stage.  May be perfectly true, Ziegler's Olivier, obviously,  scrupulously fair, but rather more of a bore than the original.