My Confession: An Introduction for Salman Rushdie 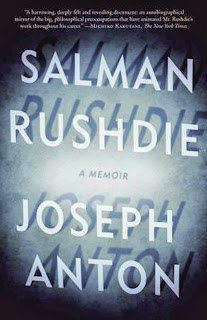 (If all goes well, I should be introducing Salman Rushdie on the stage of Town Hall, Seattle, come 7:30 tonight.  Here then the text I tend to employ to that purpose.  I make it available here, first because I've been asked to provide a copy in advance to the sign-language-interpreter -- a first for me -- and then because, having written it, I see no reason not to share it with any who might be interested but unable to attend.  For what it's worth then.)

"When I consider how my light is spent
E're half my days, in this dark world and wide... "

No one, I would hazard, ever wished John Milton blind, just to have those lines, or the poem, "On His Blindness."  No one, to my knowledge has ever suggested that Dante's exile did him good, or even, if not him, then us, that he then should write, in his "Paradiso":

"You shall leave everything you love most:
this is the arrow that the bow of exile
shoots first.  You are to know the bitter taste
of others' bread, how salty it is, and know
how hard a path it is for one who goes
ascending and descending others' stairs..."

The argument might be made, I suppose, but not by me.  After all, what were we denied because Milton never saw it?  What description of what dawn he never saw might we now treasure as superior to any line he ever wrote, etc.?  Such speculations are meaningless, are they not?  We have what we have, and must be grateful for it.  (That being, among other things, rather the point of Milton's poem, if not at least one of the threads to Dante's.)  Yet, I think we can, just here, spare a moment's sympathy for the cost.

Would any of us have it that a little boy of twelve, a child of a spendthrift and foolish father, that such a little boy should have found one day his bright studies all at an end, his family in prison and himself set to work in a "blacking factory"? Surely such a misfortune no one would have wished on any child, let alone so bright a small spark, even had anyone guessed that the genius of Charles Dickens, ever mindful of the shame and hardship of those days, would one day make of that experience, the novel "nearest to him," David Copperfield, would we?

Are we readers then insensible, always, of what it may have cost the writer to make us a book?  Are even the great books worth the cost to or even of their creator's lives?

I have a confession, then, or two, before we go any further.  First, let me say that I have been reading with pleasure and admiration the work of Salman Rushdie for thirty years now, give or take.  As I said the last time I was afforded the opportunity to introduce him on this stage -- eight years ago, was it? -- I sincerely believe him to be the greatest comic novelist in English, in my lifetime.  No one has written more novels likely to live so long as the language survives; created such characters, told such tales, written better metaphors for our time, made us laugh more ruefully, or feel more deeply the injustice in this beautiful and benighted world.  No one has written with greater love for our language, with equal appreciation of our common and uncommon histories, with greater knowledge and appreciation of our literature, even as he subverts and devils the conventions of same, for his own amusement and ours.  There is no one of equal critical and general popularity who has shown less respect for the powerful, or greater sympathy with the powerless, who has stood more stoutly against the bullies, and the bigots, against the irrational and yes, against evil.  There is, finally, no one, no writer of his station, certainly, with such accomplishments, who has risked so much in the service of the truth.

Which brings me to my other or my real confession.  (That first was just an admission of my prejudice in his favor, of my admiration of his work, and of the man, and costs neither of us anything.  It would be just so much flattery, were it not sincerely believed, and he may have it for whatever it is worth.)  On February 14th, 1989, an awful man did a terrible thing.  I was working in a bookstore in San Francisco then, and like many independent booksellers here in the United States and around the world, we decided to show in a small way our support of a great writer.  We displayed his latest novel, The Satanic Verses in our store window.  It proved to be a somewhat controversial choice, with, among others, our landlord, as I recall.  Never the less, there the books stayed, until we had sold them all.  And when we got more, back the book went into the window again.

It was a small thing, and it lasted as long as it lasted.  What else could we do for the man?

I mention it now to establish and confirm the fact of my personal sympathy for, support and admiration of the author, and that of every other independent bookseller who did likewise. Also, by way of preface, to my next confession.  Here it is.

I can not have been the only devoted reader of Salman Rushdie who, at some point, in the long, dark days of his exile from the public, thought guiltily, if only in passing, and with no little shame at the selfishness of even the passing thought, what a story for Salman Rushdie to write!

There it is. (And here it is.)  Had events proved to be other than they have, and had this book, Joseph Anton: A Memoir, never been written, I would never have admitted to that most unworthy hope.  I certainly would never have said so with the esteemed gentleman not but a few yards away.  Beyond the  callous insensitivity of suggesting that I as a reader was in any way owed any such book, or that he was obliged in any way to write it, there is the truly monstrous implication that anyone is in anyway better off for the criminal insanity that predicated these events, and inspired this memoir.

Let me say now, I would have been happier still for Salman Rushdie to have spent the last quarter of a century wherever the hell he pleased, writing whatever the hell he wanted, in the company of whomever he fancied, doing nothing at all, for that matter, if such inaction made him one whit the better for it.

But now, I am insincere at last.  While we, like Milton's God, may "not need / either man's work or his gifts," I would be dishonest not to be glad of and grateful for both.  Here then the book I have ashamedly been waiting to read for many years, and more happily still, the author I have again the honor and pleasure to introduce, if he will forgive me such an introduction, Salman Rushdie.
Posted by usedbuyer 2.0 at 11:47 AM