A Month of William Cowper 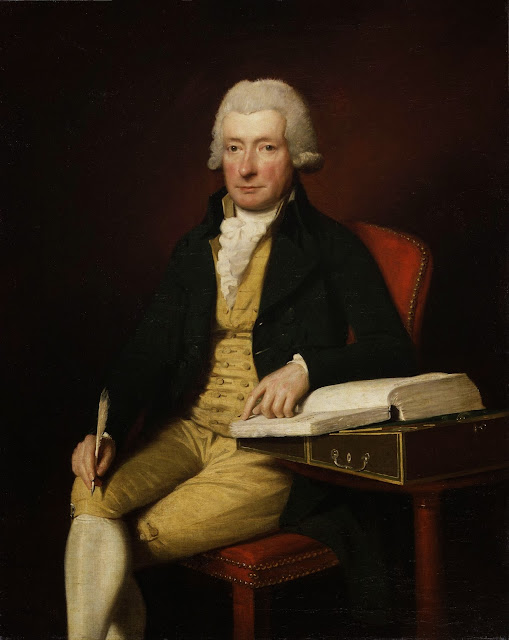 My vacation looms into view.  I am, as ever, going back to Pennsylvania to see the old people.  Regrettably, I am able to do this but once a year, always now in the Fall -- the only season I actually miss since moving to the Left Coast.  (I do not miss the muggy, buggy Pennsylvania Summers, nor the wicked cold Winters, and have, where I am, a perfectly lovely if too brief Spring.)  Experience has proved from past visits that while I am admiring the colorful foliage, and eating the creamed beans, scalloped potatoes and much missed venison of my childhood, that I will not be able to do much at all with this other enterprise of mine.  I have tried before, but an hour at the open computer at the public library does not this blog seem to make.  Likewise the iPad I received as a Christmas gift two years ago.  (Autocorrect is evidently a brilliant bit of innovative programming, designed to help fifteen year old cheerleaders avoid three syllable words.)

And so I annually make other arrangements: doodles and cartoons, a raft of video readings one year,  "guest bloggers" of various kinds another.  That last consisting of short essays by favorite writers, along with the usual, daily quotes, etc.  This time, I decided instead to devote the whole month or nearly to one favorite writer, the English poet, William Cowper, (pronounced "Cooper", 1731 -- 1800.)  I've put up here a fair number of quotations from his poems and his wonderful letters, over the years, as well as readings of both.  Why not more of both and again?

With those of the great Victorian belletrist and translator, Edward Fitzgerald, Cowper's letters have proven to be one of my happiest discoveries in recent years; books to which I have returned, in various editions, again and again.  Cowper's reputation as a poet has guaranteed him a place in the anthologies for generations; first as a genuinely popular poet in his own day,  and then critically as a transitional figure of some importance between the age of Dryden & Pope and the early Romantics.  (He has also had an other, constant and somewhat less visible immortality among Evangelicals as one of the authors of the Olney Hymnal -- perhaps my least favorite part of his not inconsiderable oeuvre.)  I found him first, I think, in anthologies of great letters, rather than poetry, though I'd certainly read at least a few poems in the usual places, like my Viking Poets of the English Language and Quiller-Couch's Oxford Book of English Verse.  Now that I've read expensively in both, I've come to see Cowper's letters and his poetry as forming a whole; one of the most endearing and quietly accomplished autobiographies in the language.

As a young man, Cowper studied to be a lawyer, but suffered a mental collapse and the first of a number of suicide attempts that led him to leave London, the law, and the early promise of literary life and retire permanently to the country.  Under the sometimes deleterious influence of the preacher John Newton -- author of "Amazing Grace" -- Cowper wrote much of the religious poetry and the rather bloody hymns that established his reputation.  The poet's religion informs every aspect of his biography and work, but it does not define either.  Thanks largely to the very English disdain for religious enthusiasm of the Victorian and Edwardian anthologists and gentlemen of letters, it is perfectly -- blessedly, one it tempted to say -- possible to read Cowper's letters, and even his poetry out from under the cloud of evangelical damnation that lour'd upon him throughout his life.  What is revealed in this reading is a man of gentle good humor, great affection and a sweet reverence for the natural world that does indeed anticipate some of the quieter beauties of Wordsworthian Romanticism.

Cowper lived the rest of his adult life in the company of devoted and devout friends, the Unwins, in a series of ever more humble and bucolic homes that provided him with not only the settings for much of his best poetry, but also with the subject matter of most of his best letters; scenes of village life, the cycle of rural life, the visits of neighbors and friends, beloved animals and books.  Periodically, Cowper's religious mania would return, and with it the despair of salvation that led him to increasingly frequent depressions from which, finally, not even the projects and affection of his dearest friends could call him back.  His was a sad end.  As represented in his poems and letters, his life is nevertheless full of large measures of real contentment, serious study, good work, warm friendship, wit and wisdom.  It is in this character that I choose here to present him, and a good and now neglected writer, and as a wonderful companion in my stead while I am elsewhere occupied.

My hope is that in so doing, I may encourage at least a few more to know him as I now feel I do myself; as a friend.
Posted by usedbuyer 2.0 at 11:50 PM