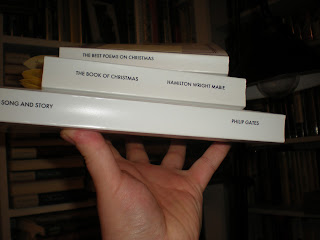 Here it is, Christmas day.  I had so many plans.  I'd only just started recording a few Christmas readings to put up, and planned more when the dread vertigo came down the chimney and that was rather the end of me.  (It's all been something of an improvisation since.)  This year, in my search for an appropriate encore for the Capote reading, I finally tripped to the possibility of reprinting something on Homer, the bookstore's beloved Espresso Book Machine.  No idea why this hadn't occurred to me before, but it never had.  Searching just with the word "Christmas," I must have reviewed a couple of dozen titles that were not Dickens' Carol, or any of the more usual titles.  I looked at the previews for probably a dozen or more, and dismissed all but three as either obvious children's titles -- which I have no need of for my purposes -- or the work of some single, now unknown sentimentalist.  There are, in Google books, more of that sort of thing than you might imagine.  I love old and neglected authors, but let me tell you, there are plenty who have earned the disregard of later readers, and it would almost seem that every one of these wrote Christmas stories.  (I don't think there was a lady with three names between 1850 and 1920 who didn't write something about poor little sister lost in freakin' snow.)

I couldn't see much in the way of specifics in the previews, but with these three books at least I could see from the tables of content that all three had contributions from still recognizable names, as well as unfamiliar folk, and that all three had selections from down the ages.  I meant to avoid being trapped with some magazine annual with one vaguely recollected poem by Charles Kingsley and then a whole list of forgotten clergymen and unreadable poetesses.  No.  I wanted Robert Herrick's "Christmas Pie" right in there with  "Jean Valjean plays the Christmas Saint," from Hugo novel.  (Might never have thought to read that scene otherwise, despite the new movie musical.)  I didn't much mind the James Russell Lowell, so long as I could spot a Robert Southey poem that looked promising or a Longfellow I knew.

The idea, I repeat, was to find further readings.  Well, I very much did.  Turns out, I hadn't time for much after Capote this year, and needed something cheerful and funny, so I went with a reliable Ogden Nash.    Still, I'd found all sorts of good things among my three reprinted books.  My thought was to close out the season with multiple Christmas readings.  I made a start anyway.  I read just three or four at that first go.  I intended to keep right on.  Then I fell over and broke my toe, etc.   Change of plans.

That hasn't meant that I stopped reading my way through these three books.  The biggest one, in terms of an unanticipatedly huge format, turned out to have the least interesting stuff in it.  I shouldn't say that though.  What I mean is this book turned out to be more of the more usual children's stories and fables, mixed with religious song, and, weirdly, the whole of Dickens' Carol, among other things.  Not the most interesting stuff and nothing like the happy surprises in the other two.

Both of these, The Best Poems of Christmas and The Book of Christmas have proved to be treasures, from 1912 and 1909 respectively.  The poems I did get read for videos were all from The Best Poems, but I'd marked at least a dozen others in that slim book that I might as easily have read.  In the other I tagged more than a dozen I never got to, prose and poetry.  (And in both, everywhere, Tennyson, Tennyson, Tennyson.  Perhaps because he was my Summer reading, but for whatever reason he would seem to be everywhere around me this December.) 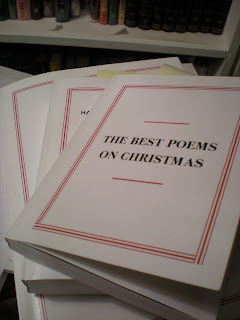 I don't mean to go on about what I didn't get done.  I may still do something aloud from either of these; certainly some of the New Year selections!  What I did mean to ruminate briefly this Christmas night was the unlikely pleasure I've had from the specifically religious verse I've been reading.  In years past, and certainly for my annual Christmas readings at the bookstore where I work, I've been very careful to avoid specifically Christian works.  The nearest I came, that first year when the first of our post 911 military misadventures was still fresh, I did read Longfellow's sad celebration of the end of an earlier and even bloodier war, The Christmas Bells.  I've never repeated the experiment in public.

My Christmas readings are meant to celebrate the season, not the birthday of the baby Jesus.  I am agnostic at best when it comes to the existence of any such person, and an atheist, personally, come to that, with little patience for Our Father Which Art.  Religious art in general has had little purchase in my   adult life, though it is of course impossible not to see and hear it everywhere around me, this time of year specially.  Now, I do love and listen to Gospel of nearly every stripe but the detestably saccharine "Contemporary Christian" variety, and I likewise love Choral Music, almost in preference to any other kind of Classical Music.  (There's something in the massed voices of humanity that soars for me well above the specifics of theology or even belief.  The collective aspirations of the species are embodied nowhere better, I should think, than in the blended sound of people singing together.)  Likewise the visual arts, dependent for centuries on Biblical reference, never make me the least bit uncomfortable because the brass plaque under the painting happens to call the woman Judith or the head in hand, Holofernes.

But with poetry, and the poetry I mean to read aloud specially, I've always shied from what would seem to suggest, in my reading of it, an endorsement of Christianity, the Nativity or redemption.  I do not ever mean to go on record as either such a hypocrite as might offer a prayer to a God in whom I disbelieve and I don't believe for that matter in preaching a message with which I have fundamental disagreements.  There are, I've always felt, plenty of good Christians -- and bad -- to share the Good News without my help.

And yet, and yet...  This year, with these reprinted old books from which to read, I could not help but be struck with the slight ridiculousness of such a stance.  I was raised, nominally as a Christian.  I certainly grew up in what it would not be too much of an exaggeration to call a predominantly Christian culture.  Turns out, there is always something to be said for Milton, and Henry Vaughan and the rest as being as much my birthright as Kipling or Whitman.

It was Milton that tipped the balance to a new appreciation and tolerance for me this year, as pompous and silly as that claim may sound from the heathen lips of such as me.  I read my way, slowly enough when I was recovering last week, through one of Milton's first masterpieces, "On the Morning of Christ's Nativity," as well as some others from his mighty pen.  Written when the poet was no more than twenty-one, it is a most astonishing performance.  In it are mixed a surprisingly mournful farewell to the old gods vanquished by the new, among other surprises.  The accomplishment of that young man's verse was frankly dazzling, and I determined to read it through as many times as I might, and even sought such supplemental explanation of the poem as I might find elsewhere.

From that to Vaughan and other English and American worthies, good Christian gentlemen and ladies all, I found myself for the first time in years immersed in religious beauties I had not properly considered in decades.  Eventually, I began to feel the strong urge to share something of my new found enthusiasm.  For me that means more usually, reading things aloud.  And so I still might.

I'm not sure when I've spent a Christmas Day more in Church than out, but this has been that day.  I feel a bit of a fool for having denied myself such an experience heretofore for no better reason than for fear of being thought insincere.  (I felt no such embarrassment singing along with the great Mahalia all these years, let me just say.)  The revelation, if that word doesn't seem too irreverent, came to me at last that my enthusiasm for the individual poems and poets need not be curbed by my failure to subscribe to every thought and sentiment expressed.  I can't say that I've ever agreed with everything I thought good, or even everything I thought to read aloud.  This then may well prove to be the falling away of my last taboo as a reader, for all I know tonight.

I may still feel the need to announce now and again my own lack of faith entire before I read the book of Luke's most famous story, but I can't think now why I shouldn't read it, or anything else from either the Gospels or the Christian Canon without worry that I, of all people, might be mistaken for a Baptist.  The sublime is not something that needs my concurrence to be beautiful, or mine.

And that's my Christmas reading for tonight.