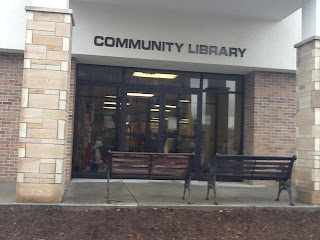 Back to visit the old people in October, I was finally able to see for myself if the set of Dickens I sent was on the shelf of my hometown library.  In an earlier post I'd described buying and boxing up a full set of the Oxford Illustrated Dickens to donate.  Earlier still, I'd described in a post my horror at finding naught but busted Book Club editions, and old strays on the Grove City Community Library shelf.  Not true any more.

A full set, twenty-one little hardcover volumes, with the original illustrations are now available on the open shelf, where they belong.  Done and done.

When I was in the library anyway for the free WiFi, I announced myself, and asked if I mightn't have a picture of someone from the staff, posing with the set. 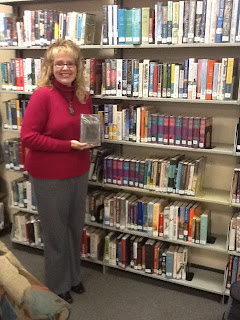 Here's Librarian Heather Baker with her favorite of the novels, Little Dorritt.

No secret, my less than happy experience of public libraries in general, and of the one in my hometown in particular.  Growing up, I had to lie about my address to even use the library.  (We lived outside of town and I had to claim my town-grandma's place as my own to take out a book.)  More than once as a child I was forbidden certain books from the general collection because some busybody librarian didn't think the title "appropriate" to my infant intelligence.  (That ended when my little, unassuming mother told the party at the desk that thereafter, I "could read any damned thing" I wanted, as she was my mother and it was nobody else's business to raise me.  Thus I first read Don Quixote, whores and all.  Still proud of the old girl for that brave day.)  My experience in most public libraries since has done little to convince me that most are any better than they should be and that most are almost infinitely, tragically worse than might be imagined.

That said, I still believe in the mission of the institution, respect the sincerity and enthusiasm with which most public librarians go about their business, and believe absolutely in the necessity of public libraries for the health and stability of the Republic.

I have however come in just the past few years to despair of anyone finding on their own anything much that's worth reading in a public library, the one in my hometown not excepted.  Before my donation, there was no copy of David Copperfield, no Oliver Twist or Great Expectations!  I walked the stacks this last visit and found but one, old, badly translated and much abused novel by Dostoevsky, but three Austen, no Middlemarch, no Vanity Fair.  Forget for a moment the great 19th Century masters.  I saw no Bellow, no Joyce, one Updike, no Beckett, and so on and on, nothing and nothing.

The Grove City Community Library, as now situated is a handsome building; brightly lit, inviting and well arranged.  The limitations of the space would not allow for any but the most judicious selection even if the staff were granted carte blanche with their acquisitions budget and every awful, bad and or busted old book was thrown out.  Still, what is there is far from good, much of it, and much that might, and ought to be isn't.

Why this exercises me so is not just outrage on behalf of Dickens' ghost, in this, the 200th anniversary of his birth. While I understand the argument that libraries must change to meet the new requirements of a changing community and new technologies, I still believe with all my inky old heart that nearly no one ever wanted to read a book they never saw, that more readers find the books they need by finding them on a shelf than will ever find them in a dedicated "search."  Public libraries must be as much about happy accidents as they are about reference and recommendation, or they are just the poor man's Google, with ugly carpeting and poor lighting.

Now at least some other, younger, unknown myself may come across, as I did, The Christmas Books.  Someone who may never have read any further than that, may find Barnaby Rudge.  Great Expectations may lead to the journalism, or "Boz," anywhere, on.

I was more than a little miffed that I had to ask if the library had received the books I'd shipped.  I was not pleased to have had not so much as a "thank you" for a donation made in spite of rather than in memory of my own childhood experience of the place.  (Please note that despite my very best intentions, I could not make it quite to the end of this without mentioning the insult.  Pooh.)  Nevertheless, I am convinced that what I've done, I did well and someday, should I have occasion still to return, I may see someone, some boy or girl, some old party or some recent immigrant -- they have those nowadays, even in Grove City, PA -- with his or her nose in a book I sent.

Perhaps the Spirits will give me a glimpse, some Christmas.