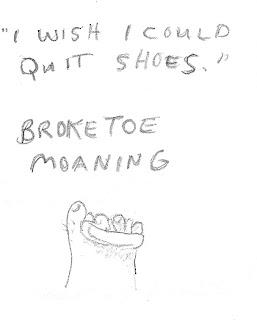 To recall my unhappy hour in pain will do nobody a bit of good.  Truth be told, this last "spell" was not so much a descent as a straight-up fall.  I believe my last words, around 4PM, were:

And then, down I went, you see.  The vertigo was on me once more, but this time I fainted dead away. Came to with my head swimming dangerously; up was down, down was up, over and around, etc.  I was flat on the floor.  Could not get up again.  Turns out, by the time my beloved husband, A. could shake his stiff hip out o' bed and rush to my side, I was out.  Told me later what I'd done. Seems I just went straight back, head-first, taking out my crowded nightstand, and kicking my right foot up under the bed-board.    A new twist, as it were, on the now sadly familiar routine.    The predictable nausea and sweaty horror followed, as did thereafter the ambulance, the emergency room, the restitution of lost fluids and so on and on.  By the time I was something like myself again, my next articulation was:

(Isn't it curious, and I'm sure entirely cultural, how one will actually use such cartoonish exclamations when in pain?  It's almost as if there was a kind of comfort in their familiarity.)

Seems this time I cracked my thick head -- though just a little bit of plaster came loose there -- and broke my little toe.

Such a mess.  It was after 11PM before we got out of Virginia Mason Hospital.  My dearest A. wanted to leave me at the door and fetch the car, but that seemed to me a not very good idea in the wind and cold rain, so instead we hobbled out together, me with my broken toe in a slipper, him with his bad hip.  The garage was all down hill.  Took us quite awhile.  A passing elderly lady wished us a good night as she motored past us.  Had to laugh.

Since then it's mostly been a struggle to sleep, re-wrap the toes, and hobble, slippered, around work.  Nearly useless, really.  Poor me.

Enough of that.  There is one fascinating aspect of these emergency room visits.  This is the first where I wasn't kept overnight for "observation," but we had no way to know that when we went, so dear A. packed me a bag, just in case.  Now, on that nightstand I knocked over, beside the lamp, the earplugs, the clock and the lip-balm, there were probably about three dozen books on, under or near.  A. tidied these roughly away.  But now here's the part that's always interesting: he picked two books to bring for me, should I have to stay in the hospital.  Such a puzzle, what to pick?

I have a hard enough times most mornings deciding which books to bring with me to work -- in a bookstore, yeah, I know; coals to Newcastle.  I am usually reading at least half a dozen books at any given time.  This is not a sign of any kind of genius, just a short attention span.  If I can't make up my mind what to read, how then was poor A. to decide?  And what did he decide?

A big one and a little one, I should think.  The big book was John Ciardi's translation of The Divine Comedy!  Understand, I have never been able to read Dante.  True, I don't read Italian, or anything but English for that matter, but I mean I've never been able to make it through even The Inferno.   Various translations down the years, but I just haven't managed it.  I find the whole enterprise antipathetic: theologically and morally repugnant, more than a little sadistic, and finally, dull.  I'm sure I'm wrong.  I'm sure Dante Alighieri belongs in that rare company with Shakespeare and Milton.  Thus the Ciardi on the nightstand, as I was clearly, at some point in the past year or so, contemplating another go at it.

And then, speaking of Milton, the smaller volume packed turned out to be Volume III: Milton to Goldsmith, of the great Viking Portable Library anthology, Poets of the English Language, edited by Norman Holmes Pearson and W. H. Auden.  Milton & Dante!  Fair enough, given my circumstances on the night in question.

I read neither that night and hadn't any reason to think I would any time soon thereafter.  Still, maybe I should.  Maybe my dear husband's instincts were better than he knew.  What better way to nurse both my injuries and my sense of injustice?