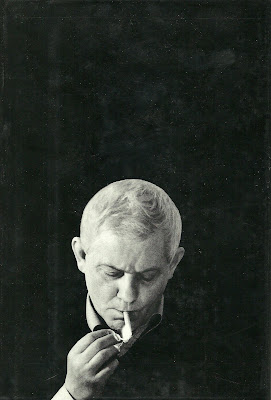 So a friend reads Zbigniew Herbert and now I have to read Zbigniew Herbert? The friend in question is one of those straight men who cook, you know, big, soulful eyes, balding in a gentle way, traveled, an artist -- he reads Polish poetry, for Heaven's sake. Still, I would resist even his recommendation, had we not had an unread used copy come in. Simply put, it's a beautiful book.

It's true, I judged this book by its cover. It's nearly as attractive, in it's way, as my friend S. I'm already reading the newest translation of Cavafy finally, properly and straight through so I do not need another poet just now. But then I look at the nice new book, and I'm reminded of my friend's dark eyes, and, oh hell, why not? It is a good cover, a great cover maybe. Look at all that uninterrupted black, no title on the front. What there is, is that great photo by Anna Beata Bohdziewicz, of just the author and of the author, just the necessities: a hand, the match, the cigarette, the face -- coming out of the dark. The match-light on his fingertips might be from a Vermeer. And that head! That head is a glorious thing in black and white, isn't it? The mouth's tight on the cigarette, but to my mind at least it suggests just a pause, the brow, ever so slightly knit but not cross, and then the dome and that tightly swirling atmosphere of hair. It looks a large and wise head, doesn't it. The cover tells me I should know the poet, though I don't, didn't anyway, even after the book's been turned in the hand to read the name on the spine. Ah, but I had to pick the book up there, didn't I?

That kind of thing doesn't always, doesn't often work with me. I tend to resent the suggestion that I should know or recognize by sight a writer I don't, specially somehow a poet. (How many poets not long dead would you know just to look at, even poets one likes, might even revere? In every photograph I've ever seen, William Carlos Williams might have been the Grand Sachem of some Midwest lodge, e. e. Cummings, at least in middle age, some city sign-painter at the end of the bar.) Perhaps this cover works for Herbert because, not even looking up, let alone out at me, there's no suggestion of awkwardness, no introduction offered or recognition expected. Just a handsome fellow of a certain age, lighting up in the dark. It's intimate already, but observed, objective. Anyway, I like it.

I like too that that shiny black book jacket, even before I've put a mylar cover over it, even though the copy is unread, the book's already showing fingerprints, and little scratches, imperfections, though I've cleaned it carefully and the book is new. Normally, I find a design with too much solid color, let alone a solid black or a solid white, off-putting. I know how good it must look at the editorial meeting, but I sell books. I know how quickly and how bad a book can look as soon as it's come off a truck, let alone after that clever design has lived for a while shifting on a table and coming on and off of a shelf. But, with this book, I don't know why, I like it. I like the evident imperfections in the black. I like the subtle whorls and buff smudges that the shiny new mylar somehow accentuates. I like the perfect design undone already, if subtly.

I wouldn't care about any of this though, If I didn't want to sit and do nothing tonight but read more of this book. I wouldn't be staring at Herbert's face, if I didn't want to keep reading Herbert's words. (Even that name! The poet, Herbert, for me means the Welsh divine, George Herbert, 1593 - 1633, you know, the Herbert of The Flower: "Thy word is all, if we could spell." So how then, this Polish fellow, come to be "Herbert"?)

Without knowing much more than what I read in the translator's introduction -- mention of C. P. Cavafy as an influence just for a moment's serendipity -- and I'm off.

May I say, right off, I like the length of the individual poems? I know that's an odd thing to admire, and I'm not prepared to defend the statement in any educated way, but the best I can say is that the lines, at least in English, are blocked in a a pattern that's both immediately sensible and satisfying to say, both good things to me. Witness this, all but at random, from "Mr. Cogito on Magic":

Isn't that simple and good? Yet there's a bit of mystery to the thing too, and not, I should think, I would hope, just from the translation.

But back to my point and the length of the poems. Of the poems I've read, and I've read about half the book already, the few that are organized in prose paragraphs, as well as the more usual stanzas of varying lengths, none that I've read are longer than five short lines, all the poems run to a page, or two and a bit at most. None seems defined by the page, and while I can see some longer poems ahead, starting with those written after 1986 it seems, I can see more poems that have larger parts, but my point at least is simply this, that every poem has a natural breath to it, as well as a finished thought, or at least a completed question if not always a clear answer.

How I like that idea! Cavafy has a narrative -- both a short narrative or scene in each poem, and a larger narrative that makes reading his poems sequentially very much a story. Not that Cavafy's narrative progresses, you understand. It doesn't, really. The nights and afternoons and encounters with lovers, these just repeat and vary, more like a dance or a piece of music than a novel, but the music suits him, the poet, and his suits me. (The newest translation's good, by the way.)

I mention how I've been reading Cavafy because now I'm reading Herbert (who read Cavafy) and he's made a narrative too, though it's neither so intimate nor as repetitive as Cavafy's. Instead, with or without the regular figure of "Mr. Cogito" through whom he often addresses the reader, Herbert talks and talks and talks. No, no, it's wonderful, believe me. If a Cavafy poem can feel like some miniature Arabian Night's Tale, something told over coffee, with just a palm fan to stir the air -- sorry, can't be helped -- then these one-sided conversations of Herbert's feel like they last just the length of that cigarette he's lit on the books cover. Many if not most of these poems, even the ones that end, as say even the relatively long poem, "Mr. Cogito Thinks About Blood" does, on a very strong, even a violent image, all have a shrug between them:

crosses the body's horizon
the borders of imagination

And then the next poem, on the facing page, starts:

years ago
in far-off California --

leafing through
The Voice of the Pacific
Mr. Cogito
received the news
of the death of Maria Rasputin
daughter of Rasputin the Terrible

Yes? That seems to me something distinctly something, presumably Polish, that shrug. Doom. And then... shrug, and another day, another poem, another cigarette. (With Cavafy, if you'll indulge me in this conceit just a minute more, it's just an eyebrow up at the end of each poem.)

I never know quite how to say what I mean to about poetry. I haven't any training in it, no proper education in it at all. Why I write about it so infrequently frankly, even as I read more than I've ever done. So what I've just written may be as foolish as it must sound to anyone who would know how to say what I mean to, to a poet, for instance. My apologies. All I meant to suggest was that as much or more than the cleverness in these poems, and it is eminently clear what a clever fellow this Herbert was, I really very much like what I'll call for want of a better word Herbert's voice. I like the calm of it, and the brevity and sly sophistication of expression that conveys so much charming disdain in, for example, these last lines of that last poem I gave the start of above, "Mr. Cogito and Maria Rasputin -- an Attempt at Contact."

On behalf of the lady, I wince even as I smile. As does Herbert, by the way, smile, in almost every other picture than the one on the cover of his collected. In almost every photo I've seen so far, Herbert is smoking, yes, but just as likely he's smiling. I like poets that do both.