Here's a sorry state of things. While I was back in the hometown, visiting with the old people, almost every day I drove into town to go to the library and check my email on one of the public computer stations there. Wonderful service. Indeed, the community library back home is now an altogether brighter and friendlier establishment, even much improved from what it was just a few short years ago, and nothing like the dusty knot-hole of a place I remember from childhood. 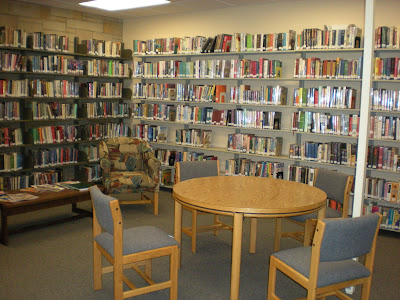 The handsome new interior of the library, and the building as a whole, is filled with light. The furnishings and appointments no longer suggest salvage or at best the second hand, and the computers, I was particularly pleased to see, were modern, fast and well regulated by a bright and attentive staff. It would not be too much to say that I actually looked forward to going to the library every day while I was home. Never thought I would be able to say any such thing.

It is well established by now that I do not think much of public libraries in anything but the abstract. The idea is a vital one. My actual experience of most public libraries, large and small, in almost every place I've lived has been, at best, a mixed bag. In my experience, well-off communities have nicer library buildings, better art, etc., but are no more guaranteed an interesting, or even adequate collection of books than their poorer relations in smaller community and or county systems. If anything, the pressure to keep current with new technologies and the like, while improving systems like inter-library loans, have only further compromised the collections of even the greatest public libraries I've known personally (like Seattle and San Francisco, ) so that traveling the stacks in even the biggest public libraries can now feel like shopping in a thrift shop. It's ugly, and depressing to think of what may well have been discarded to make room for meeting halls, mobiles, and grand staircases leading essentially to... cubicles.

The public library of my childhood was dark, unfriendly, dirty and antiquated even by the standards of the day. The women who worked there were mean, most of 'em, no other word for it, or they were just girls who might just as cheerfully volunteered at summer Bible camp. None the less...

I read Cervantes for the first time in dusty corner of that old building, and Dickens in another, that last in the summer, with only one of those incredibly noisy big circulating fans to keep the place cool. Well, now here's the sorry bit. When I was waiting for my turn at one of the very busy computer terminals, I strolled around the place, admiring this and that, and checking out the inventory, as it were. As with all my explorations in public libraries over the past few years, I did not see nearly enough books. Just me, maybe. What was painfully true was that the state of some of the inventory was pitiable. 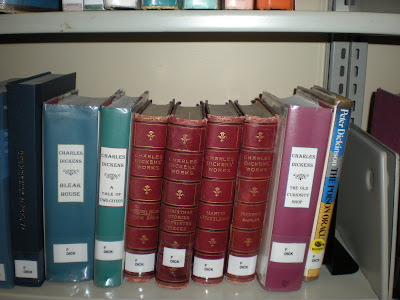 This then the whole shelf of Dickens, such as it was.

This is just tragic. Donated book club editions, in cheap cardboard covers, ancient bits and pieces from broken sets, and most if not all of these old books hopelessly broken themselves. 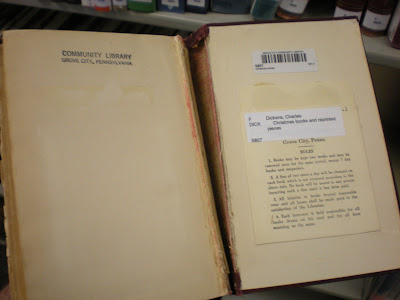 This, the sorry state of The Christmas Books.

Won't do. Now, I'm not the sort of person who makes donations to public libraries. I now longer use public libraries much if at all, except it seems on vacation. Moreover, as a used books dealer, I have seen too often and first hand the unhappy consequences of most book donations to anything other than the annual book sales organized as fund-raisers. I've personally seen beautiful old books, in some cases rare and valuable books, donated through the front door of a public library, and promptly tossed out the back door and into a dumpster by staff either ignorant of their value or too stupid or lazy to bother ascertaining just what value, if any, an old book might have. (I'm also convinced that most special collections librarians are just silly snobs. I've seen perfectly common books displayed under glass because they were part of a donation from some forgotten potentate, and valuable books treated like back-issue magazines, covered in stickers and ink and dumped in bins like kindergarten toys.) Hell, I've seen a book purchased for a dollar at a library sale, sell out of a used shop a week later for enough money that the sale of that one book that might have bought the library from which it came... a new computer.

I do not recommend trying to give a librarian a book. I sympathize with the librarians, I do. Most books people try to give them are probably every bit as useless and unappetizing as many of the books those same people have probably already tried to sell some used books dealer. Still, at least the dealers will take a look...

But, anyway, what the hell? All I could do was try, right? I happened to know where a perfectly wonderful, unread, complete set of The Oxford Illustrated Dickens could be had, cheap. The Great Man's birthday is just around the corner. The folks I talked to at the library about this seemed genuinely enthused. Worth doing, I thought.

So this then is an experiment, as well as part of what I hope will prove a larger effort to mark of the occasion of Charles Dickens' Bicentennial. Despite my prejudices, and my past experience, I want to thank the hometown library for the use of the joint, and maybe put Dickens into the hands of some other little bumpkin. Worth doing?
Posted by usedbuyer 2.0 at 9:16 PM