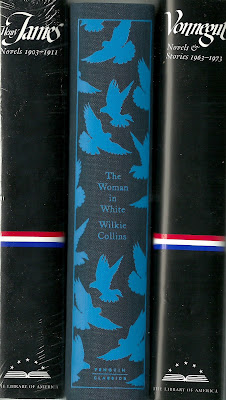 So the summer spree has been flung and another employee shopping day is past. My own discretionary spending has been somewhat curtailed of late by medical bills, so there wasn't quite the personal exuberance of shopping days past. I bought a ream of white paper, a fine-point marker, and four new books. (Took the husband to the hat store next door as well, so that he could finally use the gift certificate he got for Christmas. He bought some new caps to wear on his trip back home to Pennsylvania this summer. His only indulgence at the bookstore this time was fancy chocolate. We did buy some fancy chocolate.) All in all, for us, it was a pretty restrained outing.

Such are the times in which we live, no? Still, the opportunity to buy new books at a higher discount twice a year -- the other shopping day is just before Christmas -- is not something that could be allowed to pass without taking some notice. It is one of the finer things about working in the bookstore, not just having access to new books, but the opportunity to buy them as well. It isn't as if I do not buy new books throughout the year, and usually at a discount, but twice a year the discount is increased enough that I can get books nearly at cost, and that means I may buy new books I might not otherwise, and that I can count on buying certain books, like the latest titles from the Library of America, which I have collected from the inception of the press, at a higher discount, twice a year. In consequence, I save up and set aside these titles, knowing I'll buy them when I can, mostly. (For some authors, I have been unable to wait, but mostly, I've been good.) It isn't just about saving a few extra dollars though, for me at least, it is also about taking advantage of an opportunity to own the kind of books most booksellers, myself included, would have to admit we can not actually afford; in my case, the kind of important, enduringly and attractively made hardcover reissues, mostly, which constitute the core of my personal library.

At least twice a year then, I have to tout the Library of America. In case there is anyone left who has not heard me talk about this wonderful books, or read me raving about them here, let me just say that this nonprofit project, long the dream of many American critics and writers, including our greatest literary critic to date, Edmund Wilson, started publication in 1982. Sadly, Wilson did not live to see what has become the American "La Pléiade", the closest thing we are ever likely to come in this country to having an established canon, published beautifully, in well made books, on acid free paper that will certainly outlive me, if not all of us.

Why is this important? Well, Wilson, among other before and since, including H. L. Mencken, long argued for American literature as a new and important contribution to our literary heritage, championing not just individual American novelists and historians, but the language and experience unique to the American experience. In the age of American cultural hegemony subsequent to the Second World War, an unthinkable development for many before the war and something of a disaster according to many of the major European and even American intellectuals of the postwar scene, American cultural critics argued persuasively for the ascending influence of American artists, composers and filmmakers in the 20th Century. American Literature took considerably longer to find full respectability, at least in part because the relative immaturity of American letters, but also because of a now inexplicable reluctance, perhaps born of academic insecurity, at least before the First World War, to treat American literature as anything other than a largely inferior branch of English. It was the influence of independent American critics, first novelists and critics like Howells and James, and later Mencken and Wilson, professional journalists rather academics, that finally established our place in literature. What we had never had however, until the establishment of the Library of America in 1979, was anything like a representative collection of American classics in a uniform and affordable edition, selected and edited according to the highest academic standard, and published for an American readership. For better than twenty five years, that is exactly what the Library of America has been doing, and doing superbly well.

As a common reader, I have personally benefited from the unique opportunity the Library of America has offered me; there are dozens of American writers in my personal library, thanks to the LIAM editions, I might never have known or read otherwise: writers like Muir and Charles Chesnutt and Sara Orne Jewett, to name just the first few that come to mind. In addition, because of this standard edition of American classics, I now have a library of better known names, like Faulkner and London and Twain, in handsome, lasting hardcover books.

I have not always agreed with every selection made for the Library of America. Heaven knows, there have been writers, like Alcott and Philip K. Dick and Philip Roth, for whom I feel no personal affection even now, but I respect the process that selected these writers for inclusion with old favorites of mine, like James Baldwin, Elizabeth Bishop, and yes, my God, ol' HJ.

Slowly over the years, thanks to the Library of America, my library of Henry James has been building toward a complete edition of the works. It had been awhile since the last volume, and I have often been impatient to see this part of my library finished, but I quite understand the necessity of keeping the larger project going with a full range of American writers; novelists and playwright, historians and historical figures like Washington and Sherman and the rest, but I want my HJ! Imagine my excitement then when I discovered the latest volume of James includes my favorite novel, The Golden Bowl, as well as The Ambassadors, and -- and -- a book I'd never heard of, The Outcry, a novel adapted by James from one of his unsuccessful stage plays! Terribly exciting.

For every volume of the Library of America I've had to look forward to in the past quarter of a century, I've probably bought a dozen other classics, for more than a decade now, in older, used hardcovers. Trusting to the Library of America to eventually produce most of the American classics I will want, I've had to look elsewhere for the English, French and Russian writers I've most wanted to read. A number of these I've been able to acquire in handsome old sets from bookshops and online. I've also counted on the Modern Library and Everyman reissues to fill many of the gaps in my library. After a few disastrous years when the Everyman produced handsome hardcovers without proper dustjackets -- books all but guaranteed to look worn and shabby almost as soon as they were take, new from the shipping boxes -- I assumed a lesson had been learned. Perhaps, but not by Penguin. A wonderful designer was hired to produce wonderful new covers for lots of Penguin paperback classics. The results have been spectacular: vibrant, clever design, resulting in renewed interest in a number of otherwise largely neglected books from the Penguin back catalogue. Why not then have this brilliant young woman design a new series for Penguin, of inexpensive classics, but this time in hardcover? And here you have why this is a bad idea. The titles published in this series to date had all been books I already owned in other attractive editions. I did not, however, have a good hardcover of Wilkie Collins' The Woman in White. Finally there was a new Penguin hardcover I wanted. So I bought it on Employee Shopping Day. I plan to reread the book as soon as I've finished with a few more pressing projects. Well, soon as the price-tag comes off, so does the paint. (See the picture above.) In trying to imitate the more ornate covers of an earlier age, Penguin and their clever designer failed to appreciate that the effects they were after were dependent on considerably higher production values and things like embossing. The result? Painted cloth covers from which the lovely designs will wear away as soon as the books are handled, even lightly. It's rather depressing. (It might be argued that this cheap effect was intentional, and that the expected wear will add to the suggestion of more antique editions. This argument was actually made to me, with a straight face by a publisher's rep, years ago, with reference to the shabby Everyman books similarly published without a thought to anyone ever actually holding, let alone reading the books as printed and bound. Ridiculous. No one, specially the serious reader with a limited budget, buys a new book hoping to make the thing look old within days of its purchase. One buys a hardcover classic to have and to keep, and a new copy rather than a used to have the special pleasure of being that copy's first reader and sole owner, temporarily anyway. No one, I repeat, buys a handsome new book with the idea of owning a shabby new book.)

My purchase at Employee Shopping Day then is an object lesson in how to make, and how not to make, books that will last. I'm confident in the pleasure to be had from all my purchases. I am also reminded of just how badly the need to make a profit, even what I do not doubt will probably only be a slim profit, can undo the best intentions of publishers.

My thanks then again, and always, to the brilliant, subsidized efforts of the Library of America.
Posted by usedbuyer 2.0 at 9:48 PM