Bounded in by Experience 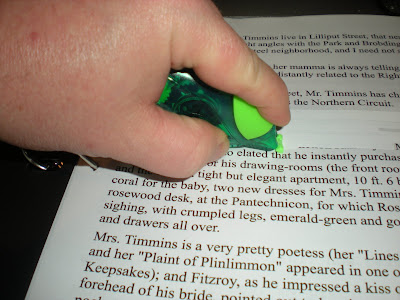 Here's where the Victorians had it all over the likes of me. In the first place, they believed, as perhaps no one had since Milton went blind, or ever will again, and it was the fervor with which the Victorians believed, in everything from the steam-engine to Empire, God's grace to good beef, offspring to the education thereof, that made them the greatest believers in books in the history of the Western world. The idea not just that everyone should be able to read, but that everyone ought to, was perhaps the most natural and most lasting manifestation of the the great Victorian expansion of intellectual possibility. They believed that the heathen might be brought to the light not just by the missionary, but the Bible, that the sinner might be redeemed by a tract, that sermons should be read, that poetry could be popular in a poor school, that Shakespeare should be packed with a soldier's provisions, that the novel should teach, that books could build roads, and agriculture made a science, and science diagrammed, the truth printed, and the world made, if not one, then better yet, and better still, and better by books. In the whole history of the written word, there is nothing like the faith invested by the Victorians in their books. It's an irony, if not a damned shame, that the generations that made the book into the birthright of every English speaking person, male and female, born in a cottage in the Cotswolds, or a cabin in Knob Creek, Kentucky, that such an extraordinarily generous, optimistic, enthusiastic, revolutionary age should be remembered as a watchword for narrowness; priggish, censorious and stiff. However comic we may now rightly find the Victorian proprieties that supposedly insisted that even a table-leg might cause a blush unless it was covered with a cloth and called a "limb," it should be remembered that Victorian fathers taught their daughters to read, when their grandmothers may not have known how, that the first serious adult education of working men and women was undertaken by Victorians, that those who might not afford the pennies that each number of the new Dickens' novel cost, would pool their money so that they might read it together.

That was the audience that went to hear Thackeray lecture on "The English Humorists", and there's where I feel most bitterly the inferiority of my position in planning an evening devoted to reading Thackeray aloud, to mark the two hundredth anniversary of his birth. Forget for the moment my own inadequacies as a reader and performer. Thackeray himself, though obviously a great writer and a master of comic prose, may not have been so very impressive at the lectern. Trollope, himself never having heard Thackeray read, in his brief biography of the elder novelist, has this to say about that:

"'He pounded along,--very clearly,' I have been told; from which I surmise that there was no special grace of eloquence, but that he was always audible. I cannot imagine that he should have been ever eloquent. He could not have taken the trouble necessary with his voice, with his cadences, or with his outward appearance. I imagine that they who seem so naturally to fall into the proprieties of elocution have generally taken a great deal of trouble beyond that which the mere finding of their words has cost them. It is clearly to the matter of what he then gave the world, and not to the manner, that we must look for what interest is to be found in the lectures."

And yet, the people came out to hear the great novelist, all over Great Britain, and in America too. Why? With Dickens it is easier to understand. Dickens was an actor of genius, by all reports, and to see him perform all the parts in the famous courtroom scene from The Pickwick Papers; changing first from round little Pickwick into loud Mr Serjeant Buzfuz, and then to the judge and then "the injured party," etc., must have been a treat. Dickens' audiences roared with laughter, and wept, Dickens broke and died in the doing of it. But Thackeray? He was no actor. His voice was, at best, "pleasant", his lectures, while funny -- really, genuinely funny still -- were, after all, just that, lectures.

His audiences though were of his own time and his was an age eager for lectures; for education, for history, for books, for authors, for novels and novelists, for words, large and small, and for ideas likewise. It would seem extraordinary, unbelievable if it were not true, but in the glory days of Victoria's reign, and even after, down at least until The Great War blew that world to bits, one might fill a hall with working men and women who would pay to sit and listen to anything from a description of a trip down the Nile to a lecture on Browning's poetry.

It was all to do with books, you see, with the centrality of books, and their faith in the power of books to raise up anyone with access to what might be best in them, that made the Victorians so uniquely susceptible to being read at, to reading to one another, to not just reading, but listening to books being read aloud.

This may sound like pleading for a larger audience than our little anniversary reading is likely to get, or whining in anticipation of an inattentive audience. Nothing of the kind. In my experience to date, the audiences for this sort of thing at the bookstore have been marvelous, if small, it's true. I have nothing to complain of on this score. Even those hearty souls not present expressly as personal friends, have, in my mind at least, been uniformly attentive, friendly and unaccountably generous to our every effort. Bless them.

My difficulty, the problem I have that makes me envy Thackeray his crowds, is all to do with the trying to shape what we will read to these good people into something that might please and surprise them, something that while still recognizably Thackeray's, might require no more explanation than I might offer were we to read Twain, or something as familiar as Dickens, and finish in something less than an hour! Bloody Victorians, it seems, would willingly sit in an inadequately heated hall, on hard benches no doubt, for no less than three hours, to hear what Mr. William Makepeace Thackeray might have to say about English kings named George, etc. I have to cut down a story running to roughly thirty pages, a story with much that while it might have been perfectly familiar to its original readers will be unknown to a contemporary audience -- things like "broughams" and "nibs" and whatnots -- and in so doing keep not only the plot and the sense of the thing, but the humor of it, as that's the main business of the evening, as planned. It's me, and the hard business of editing and practice, that has me worried.

What I want is for anyone who might happen in that evening is that they should laugh with us, enjoy themselves generally, and leave with some new or renewed curiosity about the author of Vanity Fair. What I hope for and am working toward is that our small efforts might rekindle something of the magic of the shared Victorian experience of being read to, and of hearing a little something of one of the greatest comic novelists of his or any age.

And so I white-out and edit, highlight and hurry the thing along, trying always to keep everything that I can of what makes the thing good, without making the thing incomprehensible to anyone without an open copy of the story in his or her lap. Great as Thackeray is, good as the short story I've selected still seems to me, I can't help but worry that I do the great man and his stuff justice, else why undertake the thing in the first place?

And in answer to that, and in justification of reviving the tradition of reading aloud in even so small a way as I might hope to do, I might offer the following from Sir Francis Bacon's essay, "On Studies":

“Natural abilities are like natural plants, that need pruning by study; and studies themselves do give forth directions too much at large, except they be bounded in by experience.”

I can only hope that my experience, my little talent, such as it is, my niggling and jiggering and pasting and pruning, my reading and rereading, will be enough not only to amuse for forty minutes a sympathetic audience on a Thursday night in a bookstore, but in taking this time to try to get the thing right, I might, for an hour or so, make proper Victorians of us all, and send us all back to our books, and Thackeray's, specially.