A Most Gently Rejected Submission 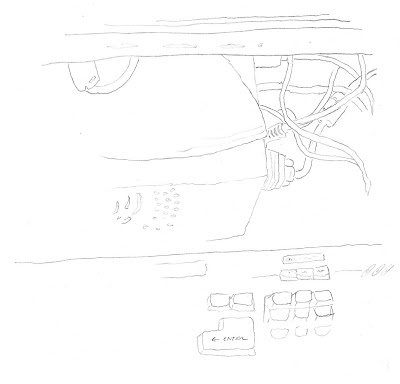 So, I can't really draw a keyboard. Not so surprising really. Yes, it's a familiar object. Obviously I spend not just much of my working life but a good deal of my time at home sitting at a keyboard. But the damned things are so geometrically repetitive; lines bisecting lines and all of the straight-ish, and I just do not have an eye for such things. Above is my best attempt of many to suggest a computer. See it? Not really a keyboard, or even a monitor, so much as the tangle between. I don't draw things like this. As an exercise, it was interesting enough. As a potential illustration for my friend's forthcoming comic novel, this did not make it.

He was so sweet. He likes most of the little scribbles I've done for spot-illustrations at his chapter-headings. This? He couldn't see it. His email saying as much was just so darling. Here's the bit about the drawing:

"Another request, and I make it somewhat fearfully: would you mind terribly taking another run at the “computer” picture – maybe the back of a monitor with a gooseneck lamp beside it, or maybe a keyboard with a hand typing? I’d be so grateful if you wouldn’t mind."

Then he quickly reminds me how much he loved the rolled up newspaper I drew for him, and the picture of bare feet. He's such a dear man.

No hurt feelings. How could I feel anything but flattered to be asked in the first place? And his enthusiasm for the other things he's seen has been genuinely gratifying.

I decided to post my tangled sketch here first because waste not want not, and though it doesn't really work for the purpose of illustrating the novel, I'm actually kind of proud of it as an attempt to look at something I normally wouldn't. Beyond that however, I'm putting it up, with just that bit of the email, as an example of how the collaborative process on this project has just been the friendliest I could have imagined. Despite being lazy and distracted, I've done a few pictures that should work, if and when I finally get them inked and made into PDF files, etc., but I think some record of my failures is worth making. There has some interest, at least for me, in the attempt, no?

Besides, my only complete failure so far was trying to draw a telephone receiver -- they call them "handsets" at work for some reason, though I don't think that that is nearly such a good word. Imagine. Talk about a familiar object! The telephones we have now at work present almost exactly the same problem for me as the computer keyboards, but the receivers nowadays are actually rather elegantly designed things; curved and solid and simple, and yet nothing I sketched, with or without a hand to hold it, looked remotely like a telephone. Completely defeated, after probably a dozen sketches. So frustrating! I've just had to walk away from that idea. Can't do it. So sorry.

Meanwhile, on we go. It may not seem so, considering how long this project is taking me, but I'm enjoying it, though less because of anything I've done, than because what I've done, mostly, has seemed to bring such pleasure to my friend. Here's hoping he'll like the next one.

(Drawing a steering wheel, again, of all things, looks to be the next one I may have to just abandon. Who knew? Evidently, machanical objects of almost any description are just not in my range. Live and learn.)
Posted by usedbuyer 2.0 at 10:30 PM