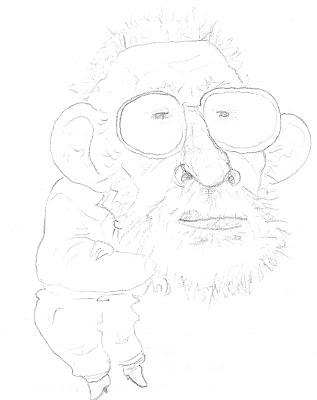 After yet another staff meeting, there was quite a crop of melons. I recommended doodling big heads a few days ago, to pass the time in meetings. As can be seen here, I've been doing just that this past week. I don't say that these have any special artistic value. I don't generally go in for this sort of caricature, though I appreciate it's masters, such as the late David Levine, of the NYRB. Obviously, a better grasp of anatomy, among other things, would be a prerequisite, as well as more recognizable subjects, or at least historically consistent costumes, etc. When I do my literary caricatures, I tend to get a little too involved in my subjects' faces to leave much room for the rest of them. Now and again, a hand pops up, once in a great while, I'll attempt a full figure. Takes more time than it sometimes seem worth doing, mostly, considering the audience for my more concentrated efforts, namely folks at the bookstore and my few visitors here. Unlike my more usual doodles, these were not taken from life, but wholly imagined. I find it best not to draw coworkers very often, specially when crowded 'round a conference table. I will do, but there's too great a chance of displeasing people sitting right there, which can be embarrassing for all parties, so I tend to keep such doodles from life, at least those taken at meetings, to myself. Safer just to invent grotesques, I find, than to suggest that any might be participating in team building, not that any do, of course, in so bucolic a setting as a bookstore staff meeting. Other than me, I mean. 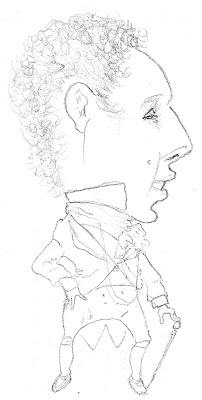 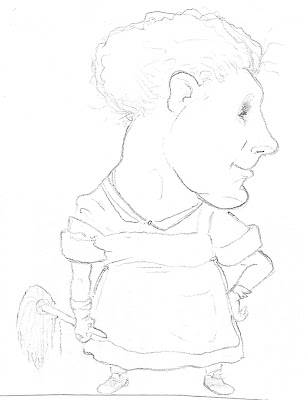 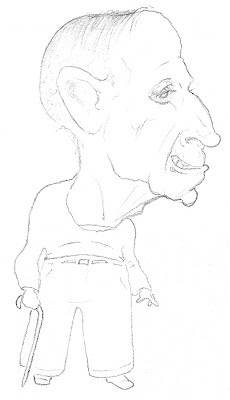 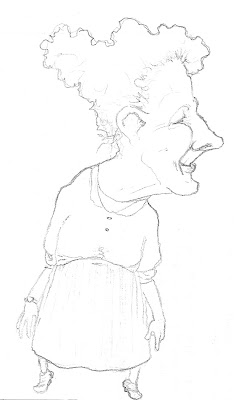