What All the Popular Fellows Know 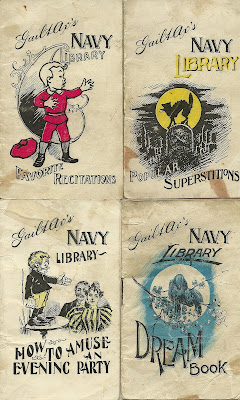 Talking to the folks at Christmas, my Dad -- master of the permanent floating yard-sale -- mentioned finding "a little book in a box of junk." He described it to me: about two inches by four, stapled, maybe a dozen pages, old, illustrated. Then he read me a little bit from the little book, or to give the thing it's proper name, the "Gailt Ax's Navy Library: Favorite Recitations," actually a tiny pamphlet, copyrighted 1896, produced by The American Tobacco Company, New York. Dad read the first poem, "The Old Arm Chair," by one Eliza Cook. Much what one would expect. Did it with feeling, did my old man. I recognized the next one, "Curfew Must Not Ring To-Night," by dear old Rosa Hartwick Thorpe:

"England's sun was slowly setting o'er the
hills so far away.
Filling all the land with beauty at the close
of one sad day... "

Heard that one declaimed, many years ago, from the platform at the Grange Hall.

Dad also read me the "List of Books contained in Navy Library." ("One given away free with each package of Navy Long Cut Tobacco.")" In addition to "Favorite Recitations," some of the titles thus made available by the good folks at American Tobacco included: 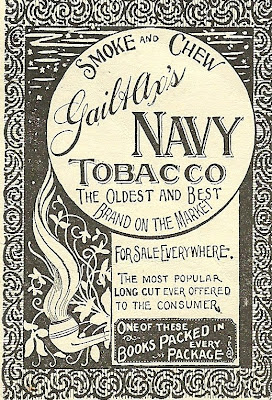 Just today I got a little packet in the mail, with the following note:

When I talked with you about having this one book I went back into the box of junk and I found all these. I think they are all really great and I think you will have fun with them.

Hoping you and A. get over your bug soon. That is some nasty stuff and it takes a lot out of you.

I thought I would share a little from Dad's latest finds. Sadly, as you can see, no #22, but some other good things. There is a handy explanation of "Popular Superstitions," including among its chapters, "It Is a Sign of Death," which teaches me to watch out for such unlucky indications of approaching doom, as the following: "If a dog howls under the window," or "If a dog lays with his head across the door sill." Damned dog. My favorite chapter though would be "Itches as Omens." Seems where one scratches tells more than might be suspected:

"Right ear -- You will receive an agreeable message."
"Left ear -- Someone is speaking ill of you."
"Right knee -- You will renounce your bad habits and prosper."
"Left elbow -- Disappointment."

Clearly, one should always walk with poison ivy on the right.

The little "Dream Dictionary," in all of thirteen closely printed pages, wastes little time on niceties. This is the kind of information one presumably needs to get at quickly. To just pull from among the Bs: "Bats -- if black, you will quarrel; white, bring pleasure and happiness," which reminds us all how rare happiness can be, I should think. "Bath -- To dream that you bathe in clear water is a sign that you will enjoy good health; if muddy, the death of relatives or friends," which hardly seems fair to your loved ones, since you're the idiot washing in dirty water, potentially swarming with bacteria and lord knows what else. And then there's this: "Beating -- For married people to dream of beating some one, shows that they will live a peaceful life; to bachelors, good fortune. To beat a dog signifies fidelity; a cat, treachery; a snake, you will triumph." There's that poor dog again. No wonder the poor thing was howling. But really, what to say of this wisdom? 1898 was a hard and dangerous time for everybody, specially for the dogs, but even for the garden-snakes, it seems.

I haven't been able to find any reference to this particular series of promotional inserts, or even to The American Tobacco Company's Navy Library, or if their Navy Long Cut Tobacco, "The Oldest and Best Brand on the Market," had actually anything to do with the Navy. Dad speculated that these products may have been marketed specially to the Service, as certain cigarettes were to guys like him, during the Korean Conflict. Certainly seems possible, though the guides to fashion and "Fancy Work" would, I think, indicate that these pamphlets were also intended for ladies, which at the time would have precluded the target audience being out to sea.

What I find most interesting about this is the combination of practical advice, light entertainment, and the kind of material meant presumably to help one get on. The little volume of parlor tricks and "gags" I find most interesting. There are illustrated instructions to the performance of "The German Dwarf," as well as "The Cornish Giant, pictured to the right.

As the anonymous author says by way of introduction in "How to Amuse an Evening Party":
"It sometimes happens that when a party of friends are gathered together the host or hostess is at a loss how to entertain them," going on to add, most encouragingly, "This little book is prepared with a view to help" and "The tricks and illusions explained herein have been tried again and again, and have never failed to amuse."

That last seems doubtful, at least on the evidence of making an elephant out of shawls and blankets, or a puppet show of sorts, titled "Aunt Sally." The problem being that these diversions are offered without any indication of just what it is one's guests will find so uproarious, once the elaborate business is finally set up, since that's where the instructions end. Perhaps these things were meant to be performed only when one already had #3. Book of Riddles and or #7. Book of Funny Stories at hand to consult. It would seem hosting a successful evening would require a considerable collection of the Navy Library's many offerings, including perhaps, #1. Potatoes: and 20 Ways of Cooking Them, though consulting only that last might explain why the party was left wanting in variety in the first place.

This kind of rather random wisdom, however eccentrically selected and arranged, would seem to have been directed at perhaps not the most sophisticated consumers of the weed. One can't imagine any of the extant Big Tobacco offering anything nearly so charming and cheerful to their consumers, though statistically, we stubborn addicts would nowadays seem to be just the kind of lower-income, disenfranchised sorts, by and large, who might most benefit from knowing what our betters would seem to know without the need of being told. Think of the benefit to society if we would but study #12. -- How to be Beautiful: the Rules of Health, for example. Think of poor Miss Berkley, mentioned above, and her too ardent beau. Now you just know, that bounder was a smoker. And please note, Navy Long Cut was meant to smoke or chew. That says something about what rough fellows might have been expected to read these little books and have need of a few social graces. (At least I don't spit on the floor.)

Glad my father fished these little items out of that box for me. Don't know that selling them would make our fortunes, or that they might have contributed much to the general wealth of human knowledge or the practice of the social niceties, but I've certainly enjoyed reading these quaint little things.