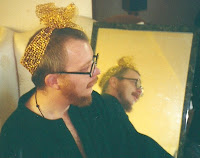 From The Letters of Charles & Mary Lamb, edited by E. V. Lucas

"Among other things, looking back to his childhood and early youth, he told the meeting what a graceless young dog he had been, and in his youth he had a good share of wit: reader, if thou hadst seen the gentleman, though wouldst have sworn that it must indeed have been many years ago, for his rueful physiognomy would have scared away the playful goddess from the meeting where he presided, for ever."