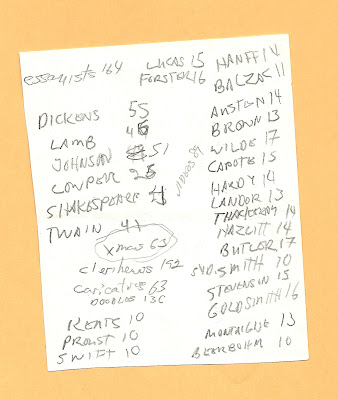 It has been two years now, since I started doing whatever it is I've been doing here nearly every night. I still don't know what to call this. My hobby? My public diary? Whatever it is, it continues to swell, even if my readership -- bless you all -- doesn't much. Looking at the thing objectively, I can't make much claim on the attention of the world, but then, luckily, why on earth would I? The numbers, for the most part, are enough to keep me humble. I've only just recently learned how to look at "stats." Still, it's been two years! Better say, seven hundred and thirty days of admittedly unequal effort, have produced to date 1650 entries of admittedly unequal value. Already, I'm getting a bit dizzy with the numbers. Patently, if I'd been doing the thing properly all this time, there ought to have be seven hundred and thirty quotations posted here under the heading of "Daily Dose," for example, and yet there are only six hundred and ninety-nine of these listed, so what's become of the rest? Did I fail to title the other thirty odd? Did I not post a quotation every day, as the title would imply I intended, for roughly a month together? No idea. Hardly seems worthwhile to pursue the problem now.

I don't really think about whatever it is I've been doing here in numerical terms, or rather, I wouldn't, had yesterday not marked an unanticipated anniversary. I can, in all modesty, call it so, not because I didn't foresee it, or try to generate some little interest in the occasion, but rather because I honestly never thought to see the day, at least not when I started. According to my first entry here, after what proved to be "a not particularly surprising, if singularly disappointing day at work at the bookstore," I came home, unquestionably feeling badly used, and my genius, such as it is, not properly appreciated. Poor me. Having contributed what I had hoped was... well, something anyway, to that other blog, I found myself on the outs. My little dignity outraged, I started this thing. When it lasted a year, I was surprised. Now it has lasted two, I stand amazed -- or rather, sit, admittedly mightily pleased with myself.

Please understand, I never do anything, at least not anything of which I might be proud, every single day, except read. I do not take exercise. I neither garden nor really cook. Other than brushing my teeth, I can't think of much that I've ever done every day that might please my mother. And yet, for all it's stuttering along from day to day, and the cheating I've done that has meant a week's worth of nonsense being added, after the fact, all on one guilty Sunday, this whatever it is has lasted. That's something, isn't it?

I intended, when I started this two years ago, to write about books. I have done. I'm not a reviewer. Perfectly honorable thing to do, and something I wish I had the discipline to do myself. Can't imagine how nowadays, but there are good people still earning a living from just such work. I admire anyone: writer, editor, publisher, critic, reviewer, who can make money from words. I think, all told, I've made about one hundred dollars in my lifetime, by writing. What the reviewers -- at least the best ones -- do, is provide a genuine service to the community of readers; promoting what's best and warning us away from the rest. For most who undertake this noble service, this means reading a lot of new books. I do that, appearances here to the contrary. What I can't seem to do is work up either enough enthusiasm, or originality, to say anything very interesting, even to me, about most of the new books I read. Might be different if someone offered to pay me, but nobody has. I've tried writing reviews before; not just of books, but of movies and television shows, and even art or music, and while I'm hardly a dab hand at it, I don't think I would muff the job, but it isn't something I specially want to do, at least for free. Honestly? It doesn't look to be much fun, -- trying to say something, anything, interesting or fresh about, for example, Jonathan Franzen. Put it another way, I simply do not know enough about literature, or anything else come to that, to contribute much to the conversation on most new books.

When I do write about books here, it is as a clerk in a bookstore, and a common reader, admittedly of some uncommon books. I see no contradiction in describing myself as such. The common reader, as traditionally understood, was no bad thing to be. All I mean by employing that somewhat antique phrase is that I have no specialized education -- or much education to speak of at all -- or knowledge, which would qualify me to offer my opinions on art, and be taken seriously as any kind of proper critic. Clerking in a bookstore is a job, not what might strictly be defined as a profession, and reading my way pell mell through something like the canon all these years, while it isn't something most sensible people would do just for pleasure, I have done to please myself. I don't believe that I'm entitled to claim any special wisdom as a result of my work-experience or my private reading, so I've tried to always keep my few good and loyal readers here always in mind of the narrowness of my perspective; I can speak only for myself. Hasn't prevented me from pontificating on matters well beyond my competence, true, but I like to think that even that's forgivable, at least among friends.

With one or two exceptions, everything I've done here has been addressed to no one else but my friends, really. Just as it should be. My friends have always had to put up with a certain amount of boredom: lots of all but mindless chatter from me about books they may never read, seemingly arbitrary quotations from unfamiliar sources, or made to no purpose other than because I thought the line pretty when I read it, or indicative of a style I appreciated. Poor you. I'm always telling what I think terribly interesting stories and anecdotes gleaned from my reading, and my friends always seem to nod and smile indulgently when I ramble on this way, though often as not, I suspect, they may have no idea what I'm on about, what point I may have hoped to make by starting off on some tangential tale of Dr. Johnson at table, or whatnot, or why they are being subjected again to such glossolalia, when all they meant to express was a polite interest in what I happened to be reading on the bus. The price of befriending the autodidact. I do apologize. I try not to be boring, honestly I do.

Looking at the numbers today, I can see where it might seem otherwise to even the kindest of my friends. What a nudnik. I'd like to flatter myself in calling attention to no less than fifty-five references to Dickens, and forty-six to Lamb, and fifty-one to Johnson, etc., but this is as nothing, if I'm trying to sound all erudite, rather than just stodgy, when I'm forced to admit that as a frequently employed "tag," Christmas -- at sixty-three times and counting -- beats out every one of my favorite authors. That suggests a certain childishness, now doesn't it? I'm not a Christian, after all, so it's safe to assume I wasn't on about theology. More like retail, and getting presents. (Who doesn't like getting presents?) With nearly two hundred posts listed as doodles, I think it's pretty clear that I'm too lazy and slack to even call most of what I've done here writing.

What I have written about, other than books, other than the books about me in this room, has been myself. This too is in keeping with an honorable tradition. I don't say the results are worthy of such company, but I have tried to be as honest as Michel de Montaigne would insist on being, and I see no reason to apologize if none of my attempts are the equal to even the least of his in the end. “Who is not sure of his memory should not attempt lying,” so I haven't.

The numbers do tell me something at least about what I've actually been up to most evenings for the last couple of years. Saw some good movies, old and new. Watched an absurd amount of television too. Made more than a few videos, too, to post here via Youtube.com -- eighty nine in all, to date. Other than the recordings I've made of readings at the bookstores, in the main, these have consisted of me sitting in a chair, reading out loud. My vanity hasn't allowed me to preserve, let alone post, the funniest bits of these brief performances; suffice it say, the sight and sound of my stumblings and fumblings, and cursing, through take after take, might have been better entertainment than most of the resulting readings, but I'm content.

I've posted roughly sixty-some of the caricatures I've drawn; some quite good likenesses, I think, and some amusing. For every one I've put up though, whole forests would seem to have perished to no good purpose in the attempt. The best have invariably been the ones that came most effortlessly, a lesson I may never learn.

What I've done mostly though is write. Just how many thousands of words I've put up here I don't know. Happily, there would seem to be no record of that. When I can think of nothing else, I resort to making clerihews, of which -- though this even I find hard to believe -- I would seem to have made nearly two hundred. When I'm trying harder, well... you can judge the results for yourselves, my friends.

What then am I to make of these numbers, and of this whole enterprise? Well, nothing I should think. (Oh. I did learn that if one wants to get noticed online, perhaps the best way is to put up a photograph of Clint Walker, shirtless.) I would seem to have amused some of my friends, at least some of the time, and even myself, now and again, and I may actually have encouraged someone out there who might never have otherwise to read The Letters of William Cowper, with some two dozen mentions of the poet, or to Terry Castle's essays, or to read a poem aloud, or to attempt something of their own.

I've enjoyed the experiment. Hope others have as well, and will. I have no plans to stop.
Posted by usedbuyer 2.0 at 5:11 PM