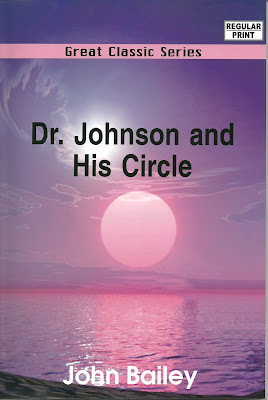 Ever wonder why the word "Internet" is capitalized? From what I've been able to glean from an admittedly cursory search thereof, that word is considered "a proper noun." You know, like "Pittsfield," or "Samsung," or "Bob," -- meaning a guy named "Bob," not the motion, obviously. Evidently, when the ol' "internetwork" of yesteryear, came of age as the "global system of IP networks," the decision was made by somebody, Bill Gates maybe, -- that Barnum of the Digital Era -- that this truly glorious technological innovation, this communications revolution, deserved the dignity of a capital "I". No one seems to have raised much objection at the time, or to have been much troubled by the choice since. I find this annoying, when my spell-check insists on this point of computer etiquette, as I would never naturally think to hit the shift, but otherwise, I am prepared to go along. This usage has, as I understand it, made it into the dictionary and the style manuals, so who am I to question it? Still, I can't help but think that the "Internet" is well on its way to lower case, not through any fault of it's own, or by way of protesting some conspiratorially dark effort to conceal its ownership while promoting its indispensability, but just 'cause. Who thinks of the thing, or the word anyway, nowadays, as anything other than another household necessity, or "common noun," like the telephone, the refrigerator, or the television -- all words, I suspect, though I'm too lazy to research the matter, that probably entered the language with some such proprietary importance attached to them, some trumpet call, eventually abandoned because once we had them, they ceased to be anything but common. Meanwhile, I don't begrudge the Internet it's self-importance -- while it lasts. I find it rather touching, like Al Gore, and those promises of personal jet-packs, and the phrases "facial tissue," and "adhesive bandages."

Obviously, I use the thing every day: at my job in the bookstore, and at home, for entertainment purposes, pornographic and not, for information, to waste time, to write here, which may come to the same thing, all day long, pretty much, when I'm not eating, sleeping, or reading a book. The Internet is a bloody marvel! Huge fan. Well done.

Just as obviously, I am, if not the Luddite I may once have been, still something of a skeptic when it comes to certain issues of the complete reliability of the information available therein. I have enough books that still have their errata slipped in to know that even the best intentions can let slip the occasional oops. Just recently I had the startling experience, while extravagantly admiring my wonderful, newly acquired, four volume set of The Letters of Edward Fitzgerald, published in all their amplitude and exacting scholarship in only 1980, by no less an august institution than Princeton University Press, of finding in the "List of Illustrations to "Volume I: 1830 - 1850," not one, but two separate entries listed as:

Now, that was a long sentence I just indulged in there, so I'll give you a minute. Safe to say, while dear old EFG lived a long and sometimes happy life, it would have required the assistance of a spirit-medium of the highest personal integrity for a man who died in 1883 to have produced so much as a note, let alone a "sketch with letter" as late as the Second World War.

This kind of thing is just inevitable in human endeavors of even the most meticulous editing. While I'm sure the good editors of the complete letters were doubtless stricken with horror when they saw those entries, right there, in the front of the first volume of a book I don't doubt they must have labored mightily to produce, for doubtless very little reward beyond the satisfaction of having done a scholarly job of it, I don't think much might have been done to fix the slip. (I often seem to read the kind of books that never get to see a second edition with corrections.)

All of which just proves to me that if such things could happen at the Princeton University Press to folks like Alfred McKinley Terhune, and his coeditor and faithful lady wife, Annabelle Burdick Terhune, bless 'em, well then... imagine what one will be likely to find in a google search, for instance, of John Cann Bailey. (Wait! I'm allowed to write "google search" without it being underlined in red like "internet"?! Boys, that capitalization business is doomed. Don't care what you got The Chicago Manual of Style to agree to.)

I will explain.I've been obsessed of late with reading letters, not the neighbor's mail, you understand, or old love letters of my own, of which I could sadly make but a very brief evening, but the greatest letters written in English, by poets like William Cowper and the above mentioned Edward Fitzgerald, among others, and I find my appetite for this literature is now all but insatiable. I've always liked letters as literature. I have a whole case full of them. But only recently have I really been reading the best letters for their own sake rather than as a supplementary interest to biography and history. Some of the letters I've most wanted to read, I've found it all but impossible to acquire by any means other than having them reprinted for me. This would include not just anthologies of the best letters, but also books about the best letters. These have proved, if anything, even rarer on the ground than collections of this or that person's famous letters themselves. Luckily, I have the means of getting this kind of thing quickly and inexpensively printed at the bookstore where I work. I have therefor been trawling the lists of books available for reprint on the bookstore's Espresso Book Machine, and have found all sorts of wonderful things. Most recently, I had a delightful little book of essays I discovered just this way, printed up, it's title: Studies in Some Famous Letters, and it's author, one J. C. Bailey. John Cann Bailey, 1864-1931, was an English lawyer, biographer, and man of letters who produced, among other titles, books on poetry as well as letters, as well as books on Walt Whitman, Milton, and Shakespeare. I only know this because, having found his essays on the great letter writers pleasant, I've been searching the Internet for some days now, to find out what I could of the fellow.

Now, as it turns out, if one were to search on the computer, as I did to start, just the name "J. C. Bailey," -- as to begin with, that was all I had from the first book I'd had reprinted -- what one will find, via Google, etc., is quite a bit of biographical matter on a man by the name Joseph Carl Bailey, Jr., (August 23, 1983 – August 30, 2010) who sadly died as the result of a brain aneurysm, while still quite a young man, obviously, having pursued a career in the family business of professional wrestling. This would not be the author of Dr. Johnson and His Circle.

That would however be the title by my J. C. Bailey, -- John Cann Bailey, -- that as it turned out, I wanted very much to read next. Consulting the lists for the EBM, I found only one affordable edition of this book, priced $12.13, from a company I'd never had a book from before, Tutis Digital Publishing. (There was no Google book available. Don't know why.) The version I could get listed the author on the cover as plain "John Bailey," but I knew they intended the essayist, not the wrestler, so I had a copy made up for me.

The covers are frankly hideous. I can think of few images less appropriate to suggest the company of the good Doctor and his friends than a tropical pink sunset, but one takes what one gets with these inexpensive reprints. (Still, some effort, surely, might have been made at least to avoid pink?) And surely, if just to avoid further confusion with the evidently quite notorious wrestling tragedy, the good people at Tutis Digital Publishing might have put John Cann Bailey's full name on the thing?

But it is only when the book is turned over, and the brief biography of the author is consulted, that one can truly appreciate both the wonders, and limitations of this uncommon miracle called the Internet. 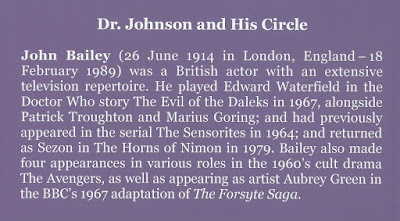 Dr. Johnson and His Circle, it seems according to this, was written by neither the late literary Englishman, nor by the American professional wrestler, but by a third man, also now sadly dead, a supporting actor noted, among other accomplishments, for his performance of the role of Edward Waterfield in the Doctor Who story, "The Evil of the Daleks," in 1967. This theatrical John Bailey, having been born in 1914, one year after the original publication of the book in 1913, would seem to have been destined for just the kind of science fiction show that featured a Time Lord, because that was one neat trick, that was, writing a whole book about 18th Century personalities while himself barely in-utero. (I'd have to think the research alone would have taken even the most accomplished proto-fetus a good nine months, so imagine the struggles to correct the proofs, etc., and all before the invention of email, or this John Bailey, for that matter.)

It took a friend at work all of about three minutes, when I'd shown him the book, to discover that this was, word for word, the Wikipedia entry for John Bailey, the actor. Not the wrestler, it's true, but not the author either.

I'm grateful to have been able to have the book so cheaply and quick, and the interior seems sound and the print pleasant enough. I'm glad our British cousins at Tutis put this book on their list (Though just now, I couldn't find it, or Samuel Johnson, anywhere on their website when I searched.) I don't know that the above mentioned misprint in the book from Princeton University Press comes anywhere near to the hilarity of the cover of this new book, but both, it might be said, were clearly the result of human error.

Still, the distance between the two is enough that I feel safe in saying, in closing, the internet still has quite a lot to learn about propriety, don't it?
Posted by usedbuyer 2.0 at 11:09 PM