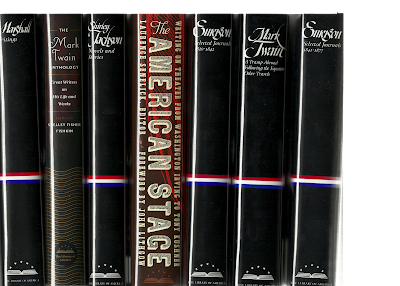 As we do every June, just before we do the bookstore's inventory, we had our semiannual Living Beyond Our Means Celebration, a. k. a. Employee Appreciation Day. Our discount goes up for the day. I live for this. As I do every year, I set aside all the Library of America volumes that have come out since the last Employee Appreciation Day, and then put the lot onto my store charge. It is exhilarating.

Two volumes of Emerson's Selected Journals, to be added to the volumes already published of his Essays and Lectures, and his Poems and Translations. At four volumes then in the series, I now have enough Emerson to have myself, someday, something like a read-right-through of the old boy. I will confess, while I've read in the essays, and found that single volume quite the easiest way to carry ol' Ralph Waldo around now and then, I'd never read the poetry at all until I read a quote from Jorge Luis Borges -- a quote I can't now locate -- recommending them. Go figure. Since, I've actually read more of the poetry than anything else. Do. They're remarkably good. The journals have quite a reputation, though I don't know that I've ever read a word of them. But, as everyone sooner or later came to see Ralph, I'm thinking the index will be my way in. The work-wife, Madame T., is a great enthusiast of RWE, but then, she likes the out-of-doors and all that. Still, on her recommendation, and because I now own these two elegant volumes, I do plan to have a go... someday.

The new volume of Twain, A Tramp Abroad, Following the Equator and Other Travels, I think, just about completes the Library of America's Mark Twain, though I still hold out hope for a volume or two of his letters. I have an early edition of those, and later volumes of just his letters to his wife and another of his correspondence with William Dean Howells, but it would be nice to have something in the series as well.

The first book I plucked from the stack to actually read was not the volume by Twain, but The Mark Twain Anthology: Great Writers on His Life and Works, edited by Shelley Fisher Fishkin. This one, I took with me to lunch. Read a fascinating essay by David Bradley, a writer I admit I'd never read before, and another by Sterling Brown, just while I ate my tacos. The book is full of unexpected writers, contemporaries of Twains and moderns, everyone from Hamlin Garland and Jose Marti, (!) to Ralph Wiley and Gore Vidal. Wonderful. There's even a charming piece from Hal Holbrook, the great one man Twain player. I've already read my way through a dozen pieces or more. Perfect for just before bed, though it makes me then want to read Twain right after.

The one that got me, and got me the minute I saw it, was the other anthology this time, The American Stage: Writing on Theater from Washington Irving to Tony Kushner, edited by Laurence Senelick, and with a charming foreword by actor John Lithgow. It was a profile of George S. Kaufman, directing the first production of The Man Who Came to Dinner, a profile by one Morton Eustis, killed only a few years after in WWII, that I read the first night. A brilliant portrait of a masterful theater technician at work, I can honestly say, I've seldom read a better on the subject. From there, I've gone back and forth, from the oldest piece, indeed by Washington Irving, to Frank Rich's valedictory "'Dolly' Goes Away," and nearly all points in-between. It's a delightful book, as good as the earlier Library of America volume on film.

I do not always buy these anthologies as they come out. Nothing thrills me less generally than sea stories, unless it's baseball, and the Library of America has done volumes for each. But both the theater volume and the celebratory volume on Twain I would now rank among my favorites.

Finally, there is the Shirley Jackson. Unable to sleep but fitfully the last night or two, I've been reading Shirley Jackson stories for the first time, I think, as an adult. Without exception, every story has been a model of deftly handled psychological tension, genuine wit, and a weirdly, wonderfully black comedy. I'm thinking we may just have to read a couple of these aloud at the bookstore, right around Halloween, and see if we can't scare up some more adult readers for the woman. I'm reading The Haunting of Hill House, for the first time since I was a kid. Much as I've always enjoyed and admired Robert Wise's movie, I have to say it hasn't half the pleasure of the book. It's Jackson's sly humor that seems to be left out of most of the adaptations of her work. I really had no idea the novel would make me smile as much as it has. And the frights are, if anything, even better on the page. Bless the Library of America, yet again, for reminding me to a neglected little masterpiece.