Spending the Day with a Band of Bikers

As I've evidently resigned myself to celebrating my weekend, and the weekend of Seattle Pride, in bed with a delayed inventory-related-flu, a cement-head, and an aching everything else, I've decided to take such comfort as I can find in queer books, preferably with lots o' pictures. This in mind, I've been pouring over a slim volume of found photographs, collected and introduced with a thought provoking essay by New York poet, Scott Zieher. Band of Bikers isn't the kind of book I might ever have studied so closely, had I not been home, in bed, and not much inclined to read anything at length. Yet, here I am, here it has been all day, propped on my knees, and so there we are.

Zieher's essay is a graceful thing, careful to explain something of his history as a collector of other people's discarded effects, and specifically how he came to own, and eventually decided reproduce in a book, these snapshots of gay bikers from 1972, without once suggesting that his interest in them is in any way different in kind from the other things he's found and kept through the years: a stranger's sketchbook diary, a collection of greeting cards with two signatures painstakingly cut away from each card, his own family photo albums. "If this is voyeurism," he admits, "it is also poignant, elegant, enticing history at once." As if to prove this aesthetic and historical interest as being superior to the more common kind of nosey curiosity and or prurience that might make anyone look twice at a dead someone's antique snapshots of leathermen, Zieher discusses these pictures -- none of which is actually sexually explicit -- as one might an exhibition of pre-Colombian pottery shards, or the isolated frames from a lost film, or indeed, the same dead man's rather unimpressive stamp collection, likewise discarded in the author's laundry room.

"These photographs don't need specific explanations to be archaeological jewels with immense cultural value," he says at one point. While that seems to me a serious overstatement -- the anonymous men in these photographs hardly constituting a lost tribe -- Zieher's enthusiasm and amateur connoisseurship as a rag and bone collector, does set up a certain reverence in the reader of these pictures that might not otherwise be assumed. Zieher has already established, right at the start of his essay, that these photographs, like all the totemic treasures he's kept from the junkyard, are for him repositories of infinite narrative possibilities. His is a poet's appreciation of ruins, rather than a scholar's curiosity for evidence. Rather than subjects for further research, the men in these snapshots, for Zieher, and by extension for the readers of his book, may and are meant to be seen, as subject to conjuration rather than cogitation -- ghosts rather than just a bunch of gay guys in Levis. This is, in a surprising way, very satisfying. 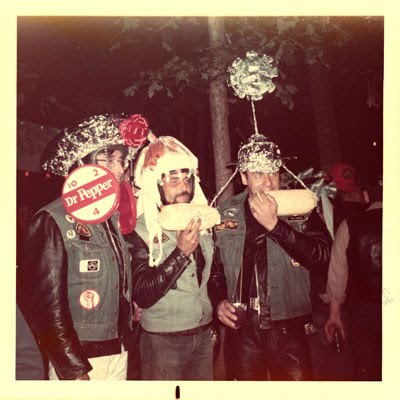 So many of the photographs suggest sex without showing anything like. The biker gear, the little leather caps, the motorcycles, the row of pitched tents, some with the flap down at mid-day, and all those hairy chests and tight pants, are after all the stock props and decorative elements of numberless porn stories. Just as often though, the club pennants and patches, the scenes of kitchens and contests, are just as reminiscent of jamborees, the less loaded kind of camping, and the silly arcana of any all-boys-clubbing. What, if anything, is there in this smile, or that embrace that might as likely mean friendship as fucking? Zieher's quite right, the not knowing, the guessing at the mysteries and meanings of these snapshots, has a pleasure that might well have been absent from a better documented record of the day.

Nevertheless, it is a melancholy, statistical likelihood that many if not most of the men in these pictures from 1972 are, like the original owner of the photographs, now dead. Browsing through the pictures then, admiring this handsome face, and the guy elegantly draped across the hood of a car, smiling at the general good spirits, and the outbreaks of plain silliness and camp; the helmets decorated for a contest, the passing slap on the ass caught from a distance in one picture, it is never really possible to forget, even for a moment, the fragile, healthy innocence in which these men played, or for that matter, the daring it still required in 1972 to be seen so openly as queer. 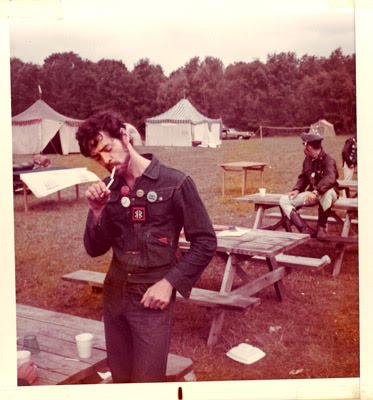 So even as I've allowed myself to read these pictures today as their present owner does, I'm mindful that there is a certain self indulgence in so doing when what I'm looking at is indeed not just an historical curiosity, but part of the record of real gay men, men perhaps still living, and as participants in history, perhaps better remembered, for instance, in Scott Bloom's 2005 documentary film, "Original Pride: The Satyrs Motorcycle Club." Yet Scott Zieher has made a contribution to that history by rescuing and publishing these pictures, and if he chooses not to document these images, or even try to find the original owner's name, he can't really be faulted for that. It was never his intention to make documentary use of these things, but rather to simply share these pictures, to exhibit the evidence just as he found in on that basement floor, and in so doing, save something precious from the fire or the tip. And he's right. It is enough. It is enough sometimes just to see.