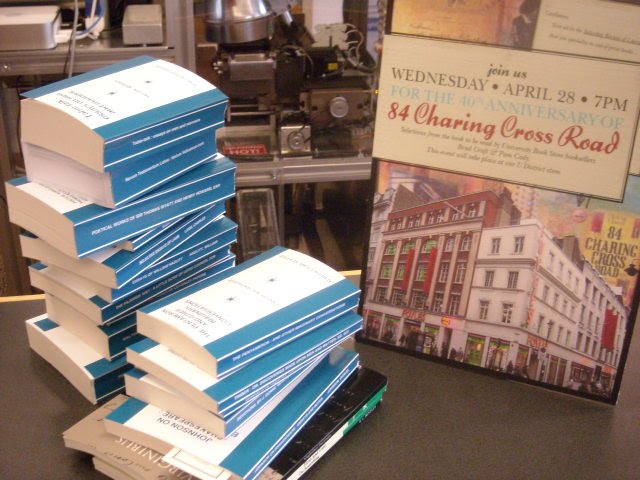 Here then are the fruits of our reprinting project, some of the books from 84, Charing Cross Road reprinted using the bookstore's new Espresso Book Machine! The 40th Anniversary of the book's publication inspired us to host a reading at the bookstore on the 28th, at 7PM. In addition to having Hanff's own book, and the in-print books mentioned, for the night of the reading, we decided to reprint as many of the out-of-print titles Helene Hanff ordered from Marks & Co. as possible.

It took a bit of doing, finding even these. Despite the new technology available to us, and the ongoing efforts of Google books to scan and make available every book in the world, there are still titles and editions that either have yet to come online, or that are still only available in very expensive reprints. This was disappointing -- though it does rather support the argument that traditionally published books, new and used, and the booksellers who make them available to collectors and readers, are by no means yet obsolete. Nevertheless, we have succeeded beyond at least my own imaginings, in being able to reconstruct something of Hanff's own library and offer these same books for sale at reasonable prices. That to me seems enough of a triumph for now.

Hanff read the kind of books unlikely to ever have been all in one bookstore at one time, as her correspondence with Frank Doel and the others in the shop over roughly thirty years makes clear. To say that the luck of such a reader has not much improved in the intervening decades would be to understate the case.

But to my mind, that is exactly the justification for the bookstore having invested in Homer, our remarkable new Espresso Book Machine. As a money making proposition, this very expensive bit of machinery will not be paying for itself anytime soon. However, that having been understood before the investment was made, no one reasonably expects Homer to pay his way. Instead, now having the means to print "on demand," the bookstore can publish attractive and affordable paperback editions of individual, out-of-print title-requests for customers, runs of self-published local authors, academic publications for the university community, and just about any other book on a pdf sent to us. All of that sort of thing is already going, and generating a modest profit. All to the good. The EBM will liberate local authors and historians and the like from their dependence on often exploitative "vanity presses," allow the bookstore to carry and sell books with a more modest audience, and help to re-establish the local, independent bookseller as a publisher for the community. But it is as a means to the end of again making available to any who might want one of the thousands, if not yet millions of out-of-print books by good and even great writers of the past, that I've come to admire this new technology most.

Now, in addition to my own somewhat eccentric needs as a reader, for the first time, as a bookseller, I am in a position to see that the bookstore need never again be without an affordable paperback copy of Walton's Lives, to take just one example from Hanff's library.

Helene Hanff waited two years or more to get her copy. Even the library hadn't one for her to read! From this classic book of biography, Hanff was able to not only read contemporary accounts of such 17th Century luminaries as George Herbert, Richard Hooker and John Donne, but to profit in a most unusual way from her reading. At the time she had been writing for television for a few years, but the series she wrote was eventually canceled. Not all that long after though, she sold a television script, to The Hallmark Hall of Fame, based on the story of John Donne's elopement with his boss's daughter, a story she first encountered in Izaak Walton's book! (How I wish someone would locate and post that broadcast on the Internet! I would dearly love to see it.)

Like so many of the wonderful books mentioned in 84, Charing Cross Road, any reader now looking for tWalton's book would have something very like the same difficulty in getting it that Helene Hanff did, or they would have, had the bookstore not been able to reprint a copy in roughly twenty minutes on the EBM!

I'm not usually this prone to exclamation marks -- please note == but just now, looking at this marvelous stack of some of the greatest names in English literature, all of them again available to be sold, to be read, to be owned! by even someone with an income as modest as mine... well, what's to do but exclaim: