The Coming of The Machine 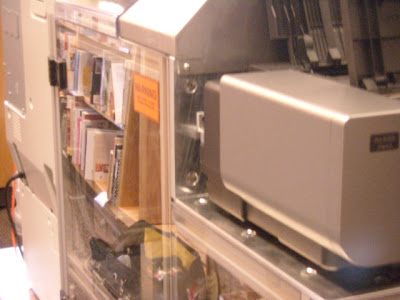 I have seen the future, and it works -- or will, very soon. It's taken a long time, but the Espresso Book Machine, or EBM, has finally arrived at the bookstore. To say that this is an exciting development is like saying sex is a pleasurable experience. Few technological developments in my time as a bookseller have generated this much anticipation, or cost this much, or been potentially this revolutionary.

I remember when the first computerized inventory systems were being introduced into bookstores. (Yes, I am that old.) Having finally "perfected" our inventory card catalogue system in the little store I was managing at the time, and being painfully aware of the marginal profits that kept that store open, I was among the skeptics. What need had we of such technology to keep track of books? What with invoicing and manual counts and careful records... I do realize how absurd that argument sounds now. This was years after libraries and larger stores, and what was then already a major force in the market, so called "super stores," had already adopted computerized inventories. I could not see past the expense. And I wasn't wrong, entirely. That little branch store did close, not all that long after. But computers, as they had to, came in and changed everything.

Gone soon enough, or not soon enough, actually, were the heavy subscription volumes of Books in Print, the weekly microfiche envelopes from distributors, the impossibly long phone-orders to Ingram in Tennessee. (These I actually miss a little, just because of the charming Southern ladies at the other end of every call, repeating the sometimes salacious titles we ordered for a bookstore in San Francisco: "The Boys of Vaseline Alley, one copy, go ahead...") Eventually, regrettably computerized ordering made much of what our publishers' reps did for us redundant. This was the worst loss, ultimately, as publishers' reps do so much more for independent booksellers than just take orders; a whole network of personal and professional relationships, and of personalized and professional service, goes with them when reps go...

I remember too when books began to be sold online and how slow most booksellers were to embrace the Internet. My own first exposure to the Internet came in the basement of a bookstore, when a hideous green screen had to be shaded with a kind of netting to keep from burning out one's retinas, and "the world-wide web" was still primarily a vehicles for academic libraries to rather clumsily exchange information. A small group of local programmers and enthusiasts regularly met in that bookstore basement then, and one of the guys explained to me that some day very soon, that muddle of information would completely change the world. No idea what he was talking about.

Now independent bookstores -- those with enough liquid capital anyway -- have an opportunity to get in on something that I do not doubt will eventually prove to be every bit as important to the future of our business as those first computers, that blazing green screen, and the electronic "readers" and the iphones and ipods and the like that we sell in the Technology Center, upstairs.

In a recent posting by the books editor of the local Seattle weekly, "The Stranger," Paul Constant, on The Slog, wrote, with a brutal honesty born of affection, that if bookstores don't want to become completely irrelevant and or cease to exist in urban centers at least, they must embrace the changes that technology, and the desperate economy, have forced on us: selling used books with new, investing in the means of producing our own books, responding to the needs of new, more impatient customers who are unwilling to wait weeks, or in some cases, days or hours, for the book they want.

Mr. Constant is right. It is no good assuming that bookstores will simply survive because they ought. We have to do what we can to see that they do, as booksellers with not only an economic interest in books, but a sense of mission, for want of a better word, when it comes to selling books.

This then is something we can do. What the Espresso Book Machine is is the means by which, in the bookstore, we can eventually produce real books to sell ourselves. Books that otherwise require a prepaid order and at least a week's wait, so called "lightening print" books not available otherwise, can be printed and bound and sold to the customer, in most cases, in less than an hour, using this machine! These are books visually indistinguishable from their original printings, most reasonably priced, and many that would otherwise have disappeared into the limbo of the out-of-print. Local authors, self-publishing, will now have the option to do so through their local bookstore, where, for a nominal fee, they will be able see their books carried and sold. Most exciting to me, literally thousands of out-of-print titles, many available, if at all, only in rare old editions, or as restricted reading in major libraries, can now be printed and sold in affordable paperback copies and sold directly to the customers requesting them!

Think of it: all the books that Helene Hanff had to write to 84 Charing Cross Road in the sometimes vain hope of her booksellers finding affordable copies for her, can now be reprinted in minutes! I know, because the list of titles from Hanff's memoir was the first list of titles I checked for availability, and yes, they can all be had through the EBM!

One of the first books the machine's operator and our trainee in the bookstore printed was for me: a copy of Lamb's essay, A Dissertation upon Roast Pig. The covers are flatly unattractive. The copy, taken from the Harvard Library, is fouled with notes, and the copyist's thumb is clearly reproduced on every other page. (Surely the good technicians at Google might have found a better, cleaner copy -- or at least kept their fingers out of it?!) It does not matter. For eight dollars, I can provide the reader with an actual book, however imperfectly reproduced, with charming illustrations, that will be his or hers to own, of something I would otherwise have to hunt up in a used copy, if I could, or hope might someday again be reproduced in an affordable edition.

Again I ask you, just think of that!

These are early days yet. The technology, and our ability to adapt and use it, will improve. As more bookstores sign on and more publishers agree to grant access to their backlist, the number and quality of the books that will be available to readers by this means will only increase. And with this wonderful new machine, so will the chance that bookstores will go on.

I was too stupid to see the future in the past. I see it now. It is better than I could have imagined.
Posted by usedbuyer 2.0 at 11:11 PM