Not Much the Worse for Wear 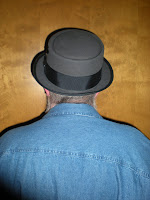 Hats. I love hats. I wear hats. Short of a Pith helmet, I will put almost any hat on my head. In Seattle, though, a hat can be a problem. As with almost every other aspect of life here, it is all to do with the weather. For months at a stretch, from Fall through Winter, a knit cap seems the best option; as easily taken off as put on, fitting in a jacket pocket, if damaged or lost, little mourned and easily replaced. But as a man, and specially as a man who may not shop indiscriminately, both for reasons of size and income, my opportunities to indulge in a bit of peacockery are extremely limited. Other than the Guatemalan table-runners I bought in fair-trade boutique twenty years ago in San Francisco and that I continue to fold lengthwise and wear as scarves and shawls, my only eccentricity of dress tends to haberdashery. When one can no longer wear any but the most comfortable shoes and can not find a pretty waistcoat that will button at the waist, hats become the last defiant gesture of the dandy one once was. If one is lucky, the world turns around in time. 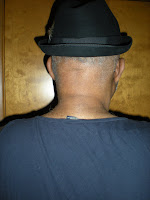 I shopped primarily in thrift-stores when I first had money of my own and finally asserted my right to dress myself. I affected high waisted and cuffed trousers from the 1940s, the afore-mentioned vests, costume pins, a pocket watch... If all of this was unusual in a small country coal town in the Seventies, at least it was the Seventies, when "used" first became "vintage" and chic, though not perhaps in my imperfect understanding of the idea and with the limited resources available to me as a teenager. I looked, I should think, more like a hobo than a habitué of Studio 54. But, as my dear A. would have said, had he known me then, "couldn't tell you nothin'."

And crowning my every "outfit" and causing no end of embarrassment to my family and friends, I insisted on wearing hats at just the moment when men's hats, other than ball caps, had finally disappeared even from the hands of funeral directors and the bald heads Southern Senators. Nobody wore a fedora when I was fresh and green. Even old Barry Goldwater went bareheaded then. I did though, nearly everywhere. I had graduated from the just allowable flat cap to the real, retro, rimmed article sometime around the beginning of high school and nothing could dissuade me from thinking I looked damned good in the brown Homburg I found in a hatbox in my grandmother's attic. I bought up hats from The Salvation Army with all the stubborn enthusiasm for headgear of men three times my age, and this despite the fact that I then had long auburn hair that waved down to my waist and which was the envy of all the women at my mother's regular beauty appointment, and of not a few of the girls at my junior prom.

Nearly all of my hats were eventually left behind me when I married. In perhaps our only truly memorable fight, very early on in our life together, dear A. once marched me into a high-end men's store, the hour before we were meant to go to a card party, he being as determined to dress me respectably in Izod and tight jeans -- it was the early Eighties -- as I was to wear a paisley scarf tied as an ascot. A tearful stalemate made us miss the party. In those days, happily, disagreements tended to end in clothes, ultimately, being irrelevant, so to say, and a compromise thereafter was reached. If I never quite conformed to my more stylish mate's vision of appropriate younger arm-candy, continuing weird, though less so, in my costume, settling eventually on black as my color and in this way at least being able to keep to some of my retrograde affectations without drawing undue notice to same when in my husband's company.

Now, of course, men's hats have come back. Even A. now wears them, and wears them well. For Christmas a couple of years ago, I bought him his first good porkpie, from a glorious and venerable hat shop, right here in Seattle, Byrnie Utz Hats, an institution of such refinement and tradition as to shame the shades lesser haberdasheries otherwise extinct. A. now keeps not one, but two stylish new models of the hat-blocker's art on the shelf in our hall closet. And I have a creamy gray beauty of my own again, despite being somewhat rudely informed by the clerk at my fitting that I have an unusually "big narrow head," that required my hat to be stretched not once, but twice.

The problem, as I said earlier and restating the obvious, is not a matter of style now but of the weather. Who wants to wear an expensive felt hat in the rain? And who wears a felt hat in the summer sun, weirdly arrived so early this week to Seattle? I've had recourse already to my old Amish straw -- and yes, it is actually of Amish manufacture, purchase on a trip home years ago to Pennsylvania. When I wore it recently at a local street fair, some ill-mannered brat pointed at me and asked its parent if I was the Quaker Oats man. But if A. decides he can not be seen with me walking the streets like an escaped Mennonite from the cow-barns of yesteryear, he will have to take me back to Byrnie Utz. They have some lovely summer numbers in straw in the window just now.
Posted by usedbuyer 2.0 at 7:58 PM