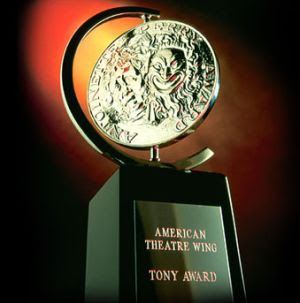 In even this entirely secular household's calendar, there are still days of obligation, when one must gather with loved ones, eat and drink to excess, grow tearful in remembrance of the dead, sing, and mock evening gowns. Such was tonight. We made sausage and peppers which we ate on paper plates, in bed, with the thin Sunday paper for place-mats. We had a whole platter of homemade oatmeal cookies for dessert. We laughed, we hummed, we solemnly bowed our heads in admiration of the wisdom of our kind when, yet again, ancient Angela was given her due, and we admired Neil Patrick Harris in a very tight, very shiny suit. That's right, it was The Tonys.

There are few happier memories of my otherwise parochial childhood than the annual Sunday when the television was conceded me for the whole of the evening, not without much grumbling and shaking of wise old heads, that I might, for three hours, imagine myself in the world I was otherwise unlikely to ever visit; where great stars I knew only from talk shows performed songs I knew only from records of show I was unlikely to ever see, where beautiful dancers wore derby hats and tight trousers and lifted showgirls in feathers and where, even then, I knew, just knew, no one minded if derby later danced with derby and all the feathers flocked together. How rare a thing it was then, that vision of perfect, musical happiness.

My husband is not a show queen, but he is a good and loyal friend. If he is not of my sect, even by marriage, and does not quite understand my avidity for tap and tune, he is willing to sit with me at my devotions. Do not misunderstand, he is very much of the faith, he tends however more to church of Oscar. Ours is not so much a mixed marriage as a liberally ecumenical faggotry, embracing fabulousness wherever it may be found in the works of Gods and gays.

This sort of thing is as much a matter of what goes wrong as right. There can be no real spectacle without the constant danger of dear old Liza blowing out another hip, Stockard Channing treading on her train or, as also happened tonight, seeming to be as shocked as we were to find her solo changed to a duet with a completely inappropriate partner from an utterly unlike show. The worst though was not even the regular failure of the sound, but the ridiculously swooping camera during the "In Memorium" tribute, which allowed us to see up the left nostril of a third violinist, but not to read the names of the dead projected on the screen. The greatest charm of this show is that it is, after a fashion, live, with all the excitement and potential for miscalculation traditionally pertaining thereto. Rehearsal, it may be assumed, was not a pretty thing this year.

Tonight did not disappoint, or rather if it did, the failures were technical. The sound system was uniformly a disaster: microphones failed or arbitrarily plucked voices from the chorus, whole measures of music were either lost or weirdly unbalanced. The awkward transitions, usually one of the special pleasures of award shows, were amazingly messy this year, specially in the otherwise overwhelmingly grand opening number -- featuring more unrelated and arbitrarily arranged performers than a traditional circus parade -- threatened thrillingly to collapse into chaos, though, in the end, only the idiot singer of the hilariously ill-featured band Poison (!) was injured slightly when he missed his mark and the scenery conked him on his balding, bandanna-wrapped head.

And there were so many touching and delightful moments to compensate, or rather balance, the mess. Frank Langella was the best presenter of the night, gently castigating the nominating committee for overlooking his performance in "A Man for All Seasons," even producing from his tux pocket the full page ad for him that his producers had wasted, then dryly conceding, “And I thought Geoffrey Rush was nice in that play.” There was a devastatingly good performance from "Next to Normal," all three of the charming sprites that alternate the lead in "Billy Eliot: The Musical" breathlessly accepted their award together, not one or two, but all five tiny Italians currently performing the lead in every working production of "Jersey Boys," brought together to try to sing the louder than all ten of their tiny lungs could seem to stand. And dear, hunchbacked, little Jerry Herman gave a touching acceptance of his Lifetime Achievement Award without once spitting in the direction of Stephen Sondheim.

So much that was so good. But then, if you are of the faith, you were either there or watching, as we were, in our nightshirts, so I needn't go on.

The best performance of the evening though was saved for the credits, when the clever parody of "Tonight" by Marc Shaiman and Scott Wittman, featuring catty lyrics about the evening's winners, was sung handsomely by Neil Patrick Harris, in his gayest moment to date, not excluding even his shirtless turn as the MC in "Cabaret."

Oh, but this sort of thing just fills me with the spirit! It's good to go to Church, if only a few times a year, on High Holy Days. It is. Renews one's faith.
Posted by usedbuyer 2.0 at 11:16 PM