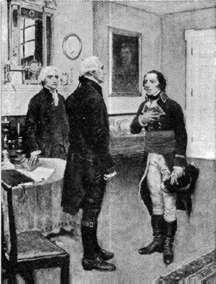 My first question, and one I've asked before elsewhere, is again, why do so many of our best American historians sport three names? The greatest modern Lincoln biographer, David Herbert Donald, sadly just passed, did the lot one better by using what looked like three Christian names, but really, were there so many naval historians afloat in his day named "Sam Morison" that Samuel Eliot Morison had to distinguish himself in this way? I rather like the sound of John Hope Franklin's middle name, as he evidently did himself, but was there some rule among 'em that every American historian worth his salt had to use his middle name on a title page? It's just odd, is all. The British seem to have a similar predilection for initials: G. M. Trevelyan, C. V. Wedgwood, etc., but that might be explained, off the top of my head, by the printers' flattery, intending a kindness by leaving a space after the last name, like so many darts in a suit by a tailor with a large but loyal client, to be "let out" in anticipation of titles like "O. M."

Anyway, here's another great American historian and biographer just come across the desk, James Thomas Flexner. If one didn't already know the man's reputation as the greatest of Washington's biographers, there's that middle name to prove it. I've never read Flexner's massive biography, in four volumes, but then, I've never been able to much love George Washington. I know, I know, "first in everyone's heart," and all the rest, but for all his accomplishments and importance, and despite the profound reverence in which The Great Man is held by my dear friend K., who seems to read everything written about him, I confess, I've always found ol' George a rather cold fish. Perhaps it's the fault of Gore Vidal. His great novel Burr, read in youth, is extremely, delightfully unkind to the old boy; regularly mocking his solemnity, his fat ass and his affection for handsome younger officers like Hamilton and Lafayette, an affection verging on the more than paternal, at least according to the wicked Queen of American historical fiction. Hard to shake the very funny caricature when trying to approach Washington's more reverent biographers. And then there is the problem of the length which every biographer since Washington Irving seems to have felt necessary to the life of Washington. I used to own Irving's biography, and even read in it a bit, but in one volume, unabridged, it was the size and weight of a substantial dictionary and impossible to carry around. The few biographers not writing such huge books tend to waste an inordinate amount of print on apologising for the fact, consistently justifying their brevity with reference to the larger work of authors like Flexner in endless notes, bibliographies etc., and then complaining of the restrictions imposed by contemporary publishers and readers. I've yet to read a comparatively brief biography of Washington that didn't annoy me in this way.

The truth seems to be that the very virtues that made Washington so great and so necessary to the revolution and the constitution, etc.; his command of loyalty, his personal dignity, his insistence on political impartiality as President, are not all that interesting, for me at least, on the page. Of the faces on Rushmore, Washington's seems the least unnatural in stone. And there are so many more personally and intellectually interesting personalities among that extraordinary generation, and so many good biographies and histories of them, I fear Washington will always, for me, have to be taken just as something of a "given" in my reading of our history.

And yet, I have been reading just a bit of the last volume, just purchased, of the Flexner, George Washington: Anguish and Farewell (1793 - 1799.) Just as there are names I seek out in any literary biography of, say, the Edwardians: Beerbohm, Belloc, Shaw, Hare, etc., knowing that these will probably guarantee at least a few amusing if familiar anecdotes and or quotes, so, when reading about the early years of the Republic, I always look for the arrival on the scene of Edmond-Charles Genêt, or "Citizen Genet" as he has come down to us. As Flexner's last volume of Washington was inevitably, given the given dates, going to have a great deal to do with this wonderful character, I could not resist.

In junior high school, taught history by a backwoods reactionary who made something of a specialty of distorting every story he told into a Gene Autry western serial, Citizen Genet was a "black hat." According to my teacher's version of events, the Ambassador of revolutionary France was a Dickensian villain of rare, almost supernatural powers of seduction who all but singlehandedly corrupted the pure innocent goodness of Jefferson and the general American populace of otherwise conservative and sensible yeomen and shopkeepers, and very nearly wrecked the infant Republic by dragging us into war. Everything about the Frenchman seemed to be just awful, from my teacher's perspective, from his looks to his politics to his character. I've never forgotten the Citizen. A fascinating character. Reading about the period since, I've come to appreciate Citizen Genet's value as a bellwether. How historian's describe him, and his activities on behalf of his government while in The United States, will tell as much or more of the writer's politics as of the actual politics of the day. It seems it is impossible to write a line about Edmond-Charles Genêt without a slip into novelistic characterization. Witness now Flexner's description:

"The pro-French citizens who turned out to cheer saw a bulky man of thirty with a thick neck. The lower part of his face, with its nobbed chin and thick lips, rose in perpendicular line up to his extensive nostrils, but from the tip of his nostrils upward his head receded, the long nose arching backwards to a bald forehead which angled back even more steeply to a high hairline. His reddish hair, making up with luxuriance for lack of area, curled down his cheeks in sideburns and flowing over his collar, finished off the geometry of his head with a second, though wavy, perpendicular."

Now Flexner, in a footnote to this, as an aside, mentions the curious fact that "All the principals in the ensuing drama, Genêt, Washington, Jefferson, Hamilton were (or had been) redheads." That footnote is amusingly evenhanded, isn't it? But I think one can get some idea of just what Flexner thinks of the frenchman, before the reader has learned a single thing about the man's personality or his mission, from that masterfully mean description of his pointy head, no? I was reminded of Stevenson's description of Hyde.

How can one resist reading about such a character? And Flexner does not disappoint. He writes well. If the historian's opinion of the frenchman is more in line with my junior high history teacher's than with Howard Zinn's, (who calls Genêt "handsome,") or my own, to the extent I've formed an opinion from my wider reading since junior high, that's only to be expected in the standard biographer of George Washington.

I'm glad I had the chance to read a bit of James Thomas Flexner at last. I don't know how much I will read once Genêt leaves the scene, but I'm enjoying the episode.
Posted by usedbuyer 2.0 at 1:52 AM