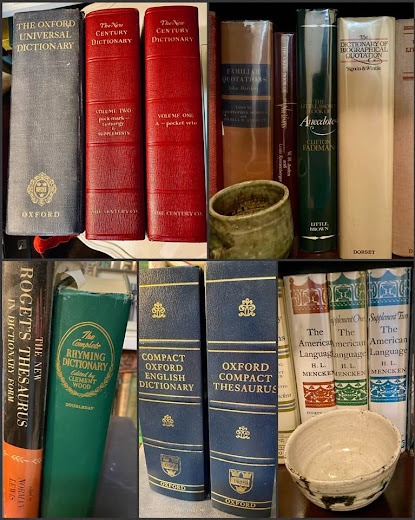 "On a fair estimate, the dictionary is the book above all books. All the other books are in it: it is only a matter of taking them out."

- Anatole France, from On Life and Letters, 2nd Series

What's the answer? Still don't know. The question I was asking myself last night wasn't as simple as this, but for simplicity's sake here it is:

When did I stop using a dictionary?

The next question of course has to be when did I start? Can't answer that one either.

Dictionaries would seem to have always just been there, like capers or a flyswatter; never noticed until needed. The only dictionary I remember in the house in which I grew up was a small thing, with red vinyl covers repaired with tape. It was thumb-indexed* and had tiny illustrations that I loved even before I could read. Did I ever actually use that book? I don't remember. Must have done, wanting other options, but when? Looking online I found all sorts of advice to parents and teachers about introducing children to the use of a dictionary. The consensus -- to the extent that there is consensus online on any subject -- would seem to be that kids should be "looking up words" as early as the second and third grade. Was I? Maybe. I don't remember much of anything about elementary school other than the names of my teachers and that they were uniformly nice ladies of a certain age. I know I was reading by the third grade and writing. I know this because I wrote and illustrated stories for my third grade teacher, Mrs. Stinson and I remember vividly that she read one of my stories, about cats flying hang-gliders, to the class. I was terribly proud. That's pretty much all I remember about third grade. (It seems that even in retrospect children are a bit self-involved, doesn't it? Me anyway.) Surely by then I was "looking up words"?

At some point someone taught me the particulars of using a dictionary properly, though that must have been later than the third grade? Don't think anyone explains "etymology" or "derivation" to third graders. Those pronunciation keys still give me fits. Never really mastered those. Alternate spellings and multiple definitions also confused me as I remember. I think it must have been in the fifth or sixth grade that I had a lengthy and doubtlessly annoying confrontation over certain adjectives ending in "ful." I found this idea delightful but was sorely disappointed to learn could not properly be applied to any noun I fancied such as "cup," or "whale." I turned to the dictionary for support and was sore disappointed. I do have a vague memory from the same period of learning the function of various reference materials in addition to the dictionary: thesaurus, atlas, encyclopedia, the index card file in a library. (Does anything like this still happen?)

The One(s) I Kept

Not the first dictionary I bought, but the first one I felt quite smug about owning was a 1932 printing of the Oxford Universal Dictionary. (I believe "Aeroplane" is listed in the "New Words." Not to be rushed was Oxford in those days.) I still have it. It is a single volume the size of  sofa cushion. I actually bought and painted a low table on which to keep it. (My illustrated New Century Dictionary in two volumes lives underneath the Oxford.) A recent survey of my references books includes two more Oxford dictionaries, a matching thesaurus, the Clement Wood Rhyming Dictionary, A Roget's Thesaurus "in dictionary form" and a reproduction of the standard edition as Roget designed it, Bartlett's Familiar Quotations from the 1950s before they started adding in quotes from Kermit the Frog and taking out Walter Savage Landor, A Strunk & White, an old Fowler's, and various odds and sundries of quotation, history, and usage.

And yes, I own a faithful and rather pricey reproduction of Samuel Johnson's A Dictionary of the English Language, as well as two books of selections therefrom and various titles about. Taking Johnson's Dictionary up to have another look actually prompted the questions with which I began.

Seven years of very hard thought and considerable, sometimes very difficult labor, went into making this landmark in our language. Begun in poverty, both personal and of previous examples in English, with a commission from the booksellers (i. e. publishers,) Johnson finally published in 1755, just as poor as he started in all but reputation. It is now most famous for the author's sometime acerbic definitions such as:

"lexico'grapher. A writer of dictionaries; a harmless drudge, that busies himself in tracing the original, and detailing the signification of words."

"viz. (This word is videlicet, written with a contraction.) To wit; that is. A barbarous form of an unnecessary word."

Johnson's Dictionary also set a standard not only in its size and comprehension, but in tracing the origin of words in the literature and providing the best examples of usage from same. He did not just improve upon the earlier English spellers and "word books," he systematized the language, provided a standard for all subsequent reference, and boldly asserted the full equality of English to any classical or continental language. An heroic task that earned him many accolades, including the degree he hadn't the money to pursue earlier in life when his father's business went bust. Thus it was Sam became Doctor Johnson. It's an inspiring story. There are others, not unlike.

I've read a good book about Noah Webster's efforts to produce his An American Dictionary of the English Language (1828), and a fascinating biography of Peter Mark Roget (1779 - 1869). The intellectual heavy-lifting required to make these standard reference works is frankly hard to imagine now, considering the available resources from which they all had to work. Of precedent was there nearly none, or nothing much good to them. It indeed took a kind of genius even to conceive these works and unimaginable devotion and diligence to see them through to publication and fame. So what do we miss in not using these books anymore?

Clement Wood (1888 - 1950) was evidently a better socialist than he was a poet. We remember him now if at all for for his complete or unabridged rhyming dictionary, a favorite of the late Stephen Sondheim. Wood's book presented not just word lists, but a system explaining how rhyme works, a way of training the eye and the ear to find and even anticipate rhyme. Likewise Roget in the original classified words under a whole apparatus of relationship that offered not just an inventory of alternatives and opposites but a way of thinking about words in relation. Bartlett's Familiar Quotations has been through eighteen editions since the first in 1855 and until recently it's organization and purpose was not just to gather quotations, but to familiarize the user with the greatest writers in English, promote the habit and facilitate the use of familiar literature in the everyday life of it's readers. Fowler's Dictionary of Modern English Usage, Strunk & White, the list of once standard reference works is if not long, certainly venerable, in part because the form of each was as useful as the content. All were intended to teach, and specifically to teach the best ways in which to practice the use of English and to pursue the information necessary so to do.

And there are the lessons lost in this new age of miraculous convenience, of Rhyme Zone and Thesaurus dot com, calculator apps and Wikipedia. I use all of these now more than my reference books. (No better than I ought to be, remember?) I do not mean to suggest that we are not all of us better off thanks to these new resources and technologies. What is lost is the habit and practice of thinking about these matters in ways that only books seem able or inclined to teach us. Does one really need quotations from Dryden to understand the meaning of a word, or Fowler's sometimes witty if autocratic rules to decide between that and which? Obviously not. We do not need any of us Johnson's Dictionary now. Doesn't mean we might not want something of what it can still teach us.

Anatole France's noble tribute to the dictionary seems to me still true, all other books are still in it. Let us hope we don't forget the means of fetching them out.

*In case anyone does not now remember the term, these were those little alphabetized tabs with the tactilely satisfying notches cut into the pages, for ease of turning to the required letter.