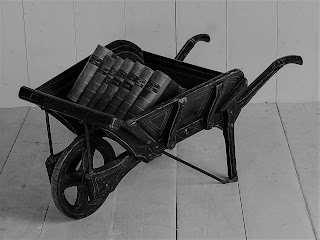 There's a reason we still read Boswell. Many reasons, come to that, but I mean in preference to all the other biographers of Samuel Johnson. Johnson died 1784. Boswell wasn't even the first out the gate. By the time he published in 1791 there had already been two very important entries. Sir John Hawkins published the first formal biography four years earlier and Hester Thrale Piozzi's Anecdotes of the Late Samuel Johnson was out by 1786. A whole raft of other writers and literary personalities were busy about the business of memorializing Johnson as well. Hawkins knew Johnson longer. Mrs. Piozzi knew him better. Both were more important to the Dr. personally than Boswell. Hawkins was at Johnson's deathbed. Piozzi made him a home and broke his heart. Compared to Hawkins', Boswell's book is a ramshackle affair, more tent than stately tomb (compared to Mrs. Thrale though, Bowell is a structural engineer.) I have both Hawkins and Piozzi in my library. I'm glad of both. Neither was much of a writer in the end, and neither's a patch on Bozzy. What both his primary rivals lacked was not love for their subject. It is delight they lack. Boswell delights in Johnson. Johnson, despite his profound pessimism and constitutional melancholy, delights in Boswell's youth and absurdity. We share in their delight and I think therein their immortality.

The thing about Boswell's Samuel Johnson is that for all his size, tics, repetitions, and bellicosity, should you go with Boswell to the Doctor's end you will either think yourself something for having gone so far, or you will want more. And there is more to be had for sure, not just in Johnson's own books but in more books about him, of which at a guess I should think there are more than any English writer save Shakespeare.

Boswell's rivals are not really my concern just here (More on them both I hope on another day.) I am thinking instead of the modern biographers, from just the last century and this. Every generation since Boswell has contributed something to the ever growing heap of Johnson studies. G. Birbeck Hill's two volumes of miscellanies in 1897 set the standard at the start, but since then the specialists have reigned and any number have contributed popular and interesting books on some of the particulars. In 1955 Columbia professor James L. Clifford published Young Sam Johnson, using all the material boswell didn't have to describe Johnson's beginnings.  (Clifford followed his first with a second volume, Dictionary Johnson: The Middle Years of Samuel Johnson. Both are wonderfully readable and informative still, specially as they describe Johnson before Boswell. Boswell's Presumptuous Task: The Making of the Life of Samuel Johnson (2001), by Adam Sisman is one such I mean to reread. Likewise Henry Hitchings' Defining the World: The Extraordinary Story of Doctor Johnson's Dictionary (2005.) There have been specialized books on everything from Johnson's politics to his prayers. In my experience most of these have sadly been academic in exactly the sense assumed correctly to make them unattractive to the general reader, meaning me.

Can't really call either Paul Fussell's Samuel Johnson and the Life of Writing (1986) or Richard Holmes' Dr. Johnson & Mr. Savage (1994) full biographies. Fussell's brilliant little book is more a critical celebration of Johnson as an important 18th Century author of much more than just his landmark dictionary. Fussell was already a favorite of mine. This book is my favorite of his. Holmes is the much esteemed biographer of Coleridge and Shelley. His Johnson book is more an attempt to explore and possibly explain the unlikely early friendship of the younger Johnson and the poet, playwright, and murderer, Richard Savage, about whom Johnson himself wrote one of his most famous short biographies. That Holmes does not solve this puzzle doesn't make the book any the less fascinating.

Far and away the least satisfying biographies since Boswell are the two most recent. Jeffrey Meyers is one of those professional biographers whose subjects seems to matter less than the regularity of his output. He's written books not only on F. Scott Fitzgerald and Edgar Alan Poe, but also Gary Cooper and Bogart. (Not a good sign. Think of someone writing cookbooks on subjects ranging from Szechuan noodles, to Jello salads, Mennonite charcuterie, and French pastry. I don't say the recipes will all be bad, but neither should one assume much depth of knowledge -- or flavor.) I've tried a couple of Meyers' books and each was I suspect the equal of all the others. His biography of Johnson, subtitled "The Struggle," might just as well have been titled, Samuel in His Smalls, so preoccupied is Meyers with the possibility that Johnson was a bossy bottom and rather liked it rough. Coulda been. Even if so, not quite the master-key Meyers seems to think.

The other recent major biography was something of a sequel. In 1999 Professor Peter Martin, previously known as a specialist in historical gardens, published a life of Boswell. Even with the wealth of new Boswell material since the last midcentury, there still haven't been nearly so many biographies of the Junior Partner in Johnson & Boswell. Martin's biography of Johnson followed in 2008. He supplemented his biographies with a new volume of Selected Works for each. Of the anthologies I make my usual complaint that our ancestors usually did this sort of thing much better; with fewer notes, less bulk, and better print, however small. I bought both anthologies and kept the later. As for Martin's Doctor, he is perhaps the grimmest in recent memory and, like Meyers' dark portrait, sexually tormented in not specially interesting ways. Neither of Martin's biographies is a bad book, but his Doctor is more of a boor (and a boar) than he need have been. There are better options.

The respected critic Joseph Wood Krutch, better known as a naturalist and biographer of Henry David Thoreau, wrote a very good Johnson in 1944. Popular historian Christopher Hibbert wrote a readable and comparratively brief biography in 1973. (I still own both.) Of the major modern biographies the two best -- in my opinion -- are John Wain's from 1974 and W. Jackson Bate's from 1977. I realize that both are now nearly fifty years old, but both are by excellent writers and literary critics who wrote sympathetically and realistically about Johnson as both a man and an author. Wain won the James Tait Black Memorial Prize -- the most prestigeous award in the UK for biography -- for his life of Johnson. After Boswell, his is my favorite. Wain was a novelist and poet of the "Angry Young Man" generation in Britian, as well as a critic. His prose is superior to the rest and his politics and psychology unencumbered by the obvious and not always welcome agendas of other writers on the subject. Walter Jackson Bate was a Harvard professor and his biography of Johnson deservedly won the Pulitzer Prize for nonfiction. Both gentlemen wrote critical studies of our author independent of their full biographies. Both produced substantial, rational, and readable books.

Reading modern literary biography can be a discouraging business simply because ironically, unlike other historic and artistic figures, much of what's written about writers isn't written for readers but, it seems, for other writers and students of writing. Nothing wrong with that, but not what one wants to read on a winter's night. Reading a biography of Benjamin Franklin there's no similar assumption that I want to become a printer, study electricity, help to write the US Constitution, or be an ambassador to France.  Leonardo Di Vinci makes for a different list but his biography can be read without the urge to take up painting or flying. Biographies of composers, philosophers, and mathematicians can make for some confusion for the common reader (again, me,) but books about writers are the worst -- or rather they can be. Biographers using the same tools as their subjects I suppose and so the temptation to technical discussions and too close attention to the shavings on the floor at the expense of the artist working is an all too common experience. Like really good science writing, literary biography isn't just a matter of accurate study or great scholarship. Whatever their contributions to their respective fields, Oliver Sacks and Edward O. Wilson were also blessed with the rare gift of communicating complex knowledge in clear English prose. Not every serious student of literature can make that claim.

Two things will be obvious to anyone who has  tried to read any of the massy lives of major writers published in the past thirty years. First, that the age of the great editors seems to have passed. How else explain publishers printing door-stops on poets dead by twenty five, or indulging an unhealthy interest the daily dietary details of a playwright who may or may not have had Irritable Bowel Syndrome? Secondly, the distinction between academic and popular publishing has grown so porous now as to make the distinction meaningless, or at least harder to judge as a bookstore shopper. When I started selling books, academic books looked reassuringly, recognizably dull: two or three color, matte covers, discouraging subtitles of a ridiculous length, back jackets giving the authors CV and nearly nothing about the book in hand. Not a bad thing, as it saved a deal of disappointment. Buyer beware. Now even the stodgiest stodge arrives tarted up in vivid graphics and for all the world looking like something to be read for pleasure rather than profit. (Still, a random page or two in the middle can show if a book is meant for an armchair or a lecture hall.)

Maybe I ought to state what to me seems obvious (you needn't agree and we can still be friends): what makes a good literary biography is what makes a good biography, and a good book -- good writing. Doesn't matter if the biographer has mastered Samuel Johnson't every Latin pun or studied the baptismal records of Hester Thrale's dead children, or found what he or she thinks is a tooth from the skull of Johnson's favorite cat Hodge. None of that research will matter if it can't to be presented in decent English prose. For all his pompous, even prolix style, Johnson wrote the King's English, and so should anyone writing about him. Boswell, bless him, tried to do likewise, and considering that one of the best established classics of English literature is a biography of Samuel Johnson, the prospective modern biographer of same should take pause.

I would add that what also is not needed, at least by me, is speculative and  fashionable psychology that would make a great, sad man into little better than a case study in unfortunate symptoms and possible perversions. Maybe his chains weren't metaphors. Fair enough, but remember why someone like me might be reading a new book about a long dead man named Samuel Johnson, considering that we've all probably read better before.