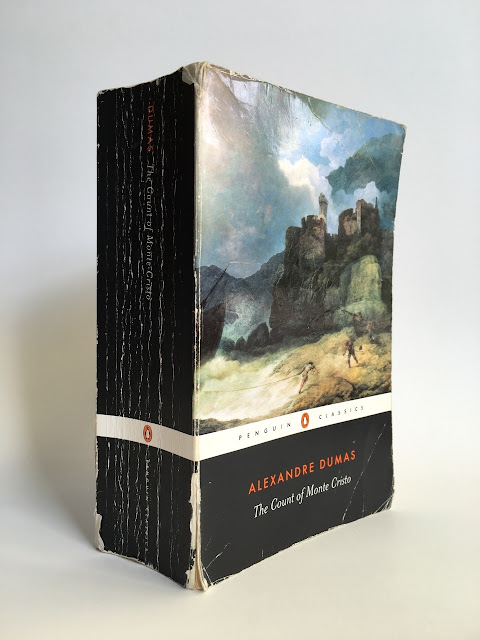 I'll do more of these as we read The Count of Monte Cristo in Brad's Big Fat Book Club, as they occur to me and or as the need arises, but here are my first five:

1) Long novels in France were a way to get around the censorship of newspapers. Strange but true. When Dumas published The Count of Monte Cristo, serialization was the rage and Dumas was king! There were plenty of other practitioners like Eugene Sue in France and most famously Charles Dickens in Britain. (The first serialized sensation in America was Harriet Beecher Stowe's Uncle Tom's Cabin in 1851.) Dumas' success came in part due to the invention of the feuilleton. French newspapers at the beginning of the nineteenth century were largely political and subject to the ruthless suppression of whomever happened to be in power, revolutionaries to royalists. The way 'round this was to include cultural content for the first time, presumably to show there was more to a particular publication than just beating the merde out of one's political opponents. The feuilleton, or leaf from a book, eventually became de rigueur. It wasn't until the advent of serialized novels that this practice eventually contributed substantially to the newspapers' bottom line, and nobody brought in the readers like Alexandre Dumas pere. The Count of Monte Cristo was originally published in the Journal des Debats from August 1844 to January 1846, in 18 parts, 139 installments! (The publication of Dumas' earlier sensation The Three Musketeers actually overlapped with The Count of Monte Cristo. It was a good time for the readers of Dumas.) Long stories? Devoted newspaper readers.

2) At the pinnacle of his commercial and artistic success, Dumas wrote for twelve to fourteen hours a day. This is hard to imagine anyone doing, but he did. In fact, a rough estimate of his output comes to more than 100,000 pages. For all his extravagance, his travelling, and his fabulous parties (he was late in joining his friend Garibaldi for a battle because he threw an enormous feast in Naples the night before,) there was never a time when Dumas wasn't writing. He worked for every franc he spent -- though he always spent more than he earned.

3) Dumas was what we would now call "a brand." Dumas was a man of the theater and theater is among the most collaborative of the arts. His first successes were all on the stage and he only turned to writing novels when he saw that he got a much bigger slice of the profits from books than he ever saw from his plays. He worked with many collaborators, famous and obscure, from Alfred de Vigny to many a struggling young hack. Collaboration was common in the literature of his day and if he regularly lent his name to others, it was because his genius eventually came to signify commercial success. Yes, he spent money like a lottery winner from Ohio, but he was also famous for his generosity. He never walked past a  beggar in Paris or Rome or wherever he went that the beggar didn't walk away richer, and often with all the money Dumas had in his pocket. He was likewise generous to other artists, even to some who might have been fairly described as his enemies. So when it came to collaborating with others on his fiction, nobody went hungry, even if the publishers didn't want his collaborators' names on the work. His most famous collaborator, Auguste Maquet, with whom Dumas wrote his best books, eventually sued Dumas for credit. The judge famously said that Dumas without Maquet would still have been Dumas, but what was Maquet without Dumas? Well, unlike Dumas, Maquet died rich, became an officer of the Legion d'honnier, and was buried with full honors in Pere Lachaise. The other difference? Nobody reads August Maquet.

4) "The Count of Monte Cristo? But I've seen that movie." Yeah you have. Everybody has. Your great grandmother saw that movie. The first stage adaptations appeared before the book was finished. Dumas himself made a stage play in four parts, and the first performance of just part one lasted over six hours. It was a hit. The first American film adaptation premiered is 1908, starring the delightfully named Hobart Bosworth. Eugene O'Neill's dad, James starred in a 1913 film, adapted from the stage version he performed in over six thousand times (please see O'Neill's Long Day's Journey Into Night for that sad story.) Probably everyone over a certain age has seen the glorious Robert Donat in the classic 1934 movie, still considered one of the best films of that year and one of the best adventure films of all time -- despite the single worst ending ever added, and trust me, all the movies change the ending. The Donat film was such a hit it eventually spawned two sequels: Son of Monte Cristo and Monte Cristo's Revenge, neither of which has Donat nor anything much to do with Dumas. (Neither's that bad but both unfortunately star the unfortunate Louis Hayward, as bland a slab of unfortunate ham as ever was served on the silver screen.) The 1934 film also figures prominently in 2005's V for Vendetta, which is kind of a low-brow rock opera without music of the Monte Cristo plot. For me personally, there will always be the be-a-u-tiful Richard Chamberlain, lookin' all doe-eyed and dangerous in his white wig and brown whiskers in the 1978 TV movie. Jean Marias, Louis Jordan, Gerard Depardieu, Jim Caviezel -- these last two before they both lost their damn minds -- there have been a lot of famous actors who played Edmond Dantes, and more that played it in every language from Russian to Chinese. I haven't seen them all, but I've watched a lot and trust me, none was faithful to the book so much as to those early stage adaptations, all of which changed the ending and a great deal besides. So, yeah. You've seen the movie(s). So have I, but if you haven't read the book? You don't really know The Count of Monte Cristo.

5) There is no good biography of Alexandre Dumas pere in English, alas. There is an excellent biography of his dad: The Black Count: Glory, Revolution, Betrayal, and the Real Count of Monte Cristo, by Tom Reiss. Published in 2012 by Crown (ISBN: 9780307382474), Reiss' biography tells the truly remarkable story of General Thomas-Alexandre Dumas, Revolutionary hero, son of a French Marquis and his Haitian slave, companion and rival to and eventually victim of Napoleon Bonaparte. Great book. Dear ol' Andre Maurois told the story of all three Alexandres, father, son, and grandson in a lovely joint biography from 1957, The Titans: A Three Generation Biography of the Dumas. It's a delightful dash through the generations, but hardly complete. Our Alexandre Dumas wrote five volumes of memoirs, detailing his own life from 1802 to 1833. For a long time the only version in English of this massive autobiography was a slim selection deceptively titled My Memoirs and published by Chilton in 1961. (The whole five volumes of the memoirs in English can now be had in ugly print-on-demand paperbacks for which I still have yet to shell out.) The only modern biography of the great writer I've ever been able to locate is Claude Schopp's Alexandre Dumas: Genius of Life, from 1988. Schopp is (was?) an important Dumas scholar in France, so maybe his book is better in French? In English it isn't frankly very good. Schopp's book is not much of a literary biography -- think Graham Robb's magnificent biography of Victor Hugo, or Edgar Johnson's double-deckers on Walter Scott and Charles Dickens -- barely mentioning most of the work that made Dumas immortal. At least in English, Schopp somehow manages to make even the most thrilling anecdote dull, if he finds the time to tell such stories at all between reviews of Dumas' bookkeeping, which -- surprise! -- was never good. I wish there was a contemporary biographer to recommend, considering the renewed interest in the life of Dumas as not only the most popular French novelist in history but also as a man of color. Maybe some day soon.*

*As for Dumas himself on race and racism, to my knowledge he addressed the subject at any length only once, in an earlier novel titled Georges, published two years before The Count of Monte Cristo and containing many of the same plot elements, but with a light-skinned black protagonist. There was a lovely new translation of this by Tina Kovar and published by The Modern Library. Well worth finding and reading.