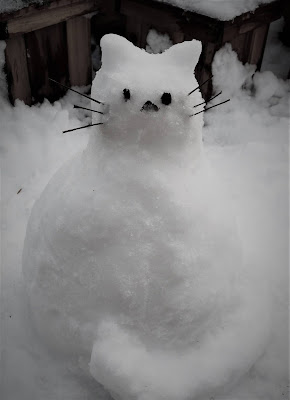 I remember more dogs, if I'm honest. No dog is anonymous for long. They make their own introductions. Glad-handers, boosters, wrestlers, and even bullies some of them. Happy to meet you or threaten to eat you -- that was every dog at the edge of every property and at the end of every country drive where I grew up. Couldn't miss the dogs. So in that bucolic landscape there may well have been as many cats as there were dogs, but not as I remember. For all I know there may have been more cats than dogs, out there in the woods, for instance. Not being so noisy and forward, cats might go unnoticed, unheard and unseen. Dogs tended to come right up at you, out of their houses and across the yards before you knew it. A dog, even a three legged dog like the one down the road, could run out the length of a chain or up to the top of a fence and announce themselves before a boy on a bike could swerve back into traffic, such as it was then. Impossible to miss knowing most dogs, even the old ones. In the country dogs would chase you, as would geese, but I can honestly say I was never actively pursued by a cat. Cats sat quietly in high windows, walked the beams in barns, appeared and disappeared from the woods, and wandered at will through dairies and haylofts. As a boy, our indifference was largely mutual. A dog was a friend or a threat. Cats just were.

The animals I knew then were rarely house-pets. Nearly all were party to an older and more practical compact with humans; tenantry for lack of a better word. Animals were housed and fed and in return many if not most of them worked or, it must be said, eventually got eaten. Dogs guarded junkyards, hunted, raced, babysat, herded, chased away missionaries and the tinkers who offered to tar the driveway. Cats lived in barns and patrolled basements and storage sheds and slept under porches. They killed rats and mice and moles, and sadly birds. Many of the cats in my acquaintance were all but feral; not altogether unfriendly -- in principle -- but you did not pet a barn cat unless she asked you. We had a barn, and a chicken coop, and so we had cats. (And a quick note to all you new urban chicken enthusiasts: rats love eggs more than you love an IPA with your vegetarian empanadas so... good luck with that.)

Of all the working cats I knew there was only one who could be said to have retired. Retirement was not unknown on my father's few acres. We were not farmers. Had animals nonetheless. Here a blind horse, there a lame pony, an orphaned raccoon, the place was usually more rest-home than workplace. I knew people who bred dogs, raised hogs, kept cows. I never knew anyone to buy a cat. Kittens, discovered or captured, tended to be put out in boxes labeled "Free Kittens" by the side of the road. (There were old farmers known to drown any kittens they found. Of this custom no child approved.) Cats being by far the least likely to stick around, fewer of them acquired names, despite the mania of children to name everything that moved.  There was more than one cat we claimed as ours and named, but few of these relationships lasted. We lived too near the Interstate highway, for one. For another, cats tended to come around or not just as they pleased. One stayed. We named her Snowball.

She was a white cat. Simple as that. Animals didn't often have human names in those days, Garfield and Morris being pretty recent arrivals on the media scene and thought comical precisely because they had names like great-uncles. Dogs had names like Tuffy and Belle. All white cat? Snowball.

She was never a kitten as I remember, though obviously she must have been at some point before I met her. Snowball was, for want of a better word, always a lady. Another grim reality of country life in those days was that townspeople when moving, or tired of feeding the thing, or presumably just bored or displeased in some way with a family pet, seemed to have no compunction about driving a few miles out and dumping the animal by the side of the road. Probably how Snowball arrived in London Village, where we were, still are some of us, and had been for a very long time. (This was I don't doubt the origin of that middle class myth about some beloved companion having gone to live on a farm.) From her imperious demeanor and somewhat presumptuous claim to shelter and food, one could assume that Snowball had started life in a higher station. She clearly felt she had come down in the world when she found us.

She would never come inside the house uninvited. That would have been rude. Officially and for quite some time, the lady was a visitor, just paying a call. She came no further than the porch. Perhaps hard experience had already taught her that there was too much potential for disappointment in getting too close to humans. Yes, she was glad of a drink. And a meal? Well, not to put anyone out, but she was feeling rather peckish at that, now you mention it. Not to be thought a sponger, she not infrequently brought a mole or a baby bird as her contribution to the family repast. Eventually she had her own dinner service waiting on the porch. What she didn't eat was allowed for the visiting strays and or an occasional raccoon, though clearly that old pillow from the glider was hers, thank you very much, whether she happened to be napping on it or no.

And then came the great day. We did not recognize it as such at the time. The lady was getting on. She still hunted a bit, as the mood took her, and she never gave up the rather heartbreaking habit of stealing kittens she clearly couldn't nurse from their mothers, but she just as clearly had begun to really feel the cold. That enclosed porch ceased to be simply a stop on her regular progress and became, to all intents and purposes, home. My mother, herself a girl from town and not known to be quite so sentimental about animals as my father, may have been the first to notice Snowball's decline. When it became obvious that the lady intended to stay it may well have been my mother who suggested Snowball might need something more suitable than an old cushion to call her own.

Dad built doghouses of notorious solidity. Like nearly everything he did in the way of carpentry, he worked with the materials he had to hand: scrap metal, lumber heavy and light, odd lengths of insolation, clipped roof shingles. The results were frankly impressive. Other than size and the absence of plumbing and windows the resulting cabins might have comfortably accommodated a family of unusually small pioneers. Dad's doghouses were so heavy he usually had to haul them into place mechanically. Don't know that anyone could have just lifted them. The size varied according to the dog, from bloodhound to beagle, but there wasn't one ever overturned in a storm. The roofing could come off our house, but the dogs? Slept right through the worst of it on fresh straw.

So it was that my father came to build his first and only cat house. No doubt the scale initially was a problem. Can only cut a two by four but so small. He worked it out. The result was just right and probably weighed six times the weight of it's occupant. He installed it on the enclosed porch in Snowball's usual spot and put her beloved cushion inside. She dragged the cushion back out. Safe to say she was not altogether pleased by the new arrangement. Cushion went back in. Cushion came back out.  Seemed the new digs were not to the lady's liking. Dad's cat housing project was a failure.

Then it got really cold. No idea how long it was before Snowball deigned to sleep in her own house. Don't know if we even noticed at first. But once she was in, she stayed and by the following Spring it had become official. The lady was retired, thank you very much. Ensconced in her tiny palace, she now expected her meals in a regular and timely fashion. One might feed any of her occasional friends when and where one pleased, but the lady's meals needed to be ready when she was or the staff would hear about it. Any overnight guests needn't think they were welcome to stay. Out. Bag and baggage. The porch was public, the cat house was hers.

If the day was nice and she felt up to it, there might be a nice walk around the grounds. In the summer she was still delighted by the prospect of June bugs and moths drawn to the porch light. On an exceptionally cold winter day, she might even be induced to come into our house to get warm, but she did not live there. She had, she need hardly remind us, a house of her own.

Remembering that she was an adult when we met, I cannot accurately estimate her age. She lived a very long time after her retirement, so her years must have been considerable. She grew increasingly impatient of rivals as she went on and liked company less and less, even ours. For children she eventually had no patience at all and would growl from within her house at even the hint of a baby's cry or a child's laugh. Her appetite never slackened until very near her end so she became rather fat. She lost teeth and may well have been more than a little blind, the gold in her eyes growing dim and the blue milkier. Appearance remained important to her and she was never less than impeccably clean in her person, though it must be said she was never much of a housekeeper and rejected any effort to replace her favorite cushion which eventually grew black with age, though she did at some point allow for the addition of a baby blanket to her decor. Like many an elderly person, she came to welcome affection but seemed to have no special need of it, then and always content within herself and to watch the world in small from her vantage on the porch.

I was already away from home when Snowball's long retirement drew to it's natural end. My parents could not bear the sight of that empty cat house, or think of allowing a new tenant. I suspect my Dad burned it, though I don't know that he did. There was never another on the porch.

To say that such a personage was ever a pet would be to demean what was a model of civilized coexistence. Snowball lived with us. Offered hospitality, she accepted, eventually and very much on her own terms. In a fairly brutal environment, she saw an opportunity and took it. Eventually she made what was an unprecedented choice to retire and picked her spot. Call it, Snowball's chance. Damned if we didn't all go along with it too.