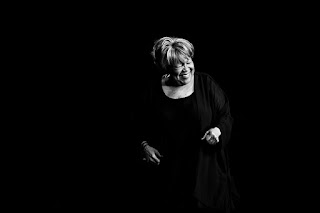 I'm not going to lie, I don't know that I have a damned thing to say. And I can't help but feel, it's not my place to talk.

I'm listening to Mavis Staples. Have been for I don't know how long. Years of course, but tonight? At least an hour now. Longer. Listening to her sing with an Irish boy named Hozier, on a great song called, "Nina Cried Power." Then her most recent album, We Get By, with Ben Harper. Then all those  otherworldly, immortal recordings of The Staple Singers. I listen to "Great Day" and just her father's opening guitar is enough to make me cry.

"Who shall be able to stand?"

Nobody needs me to say this is hard, that these are hard times, that times continue hard for more than not. I'm pretty sure I don't need to tell you. I have no right to tell anyone's hard times back to them as if I was there, or did a thing about it much worth doing, or as if their hard times were mine.

Come to that, this music from which I draw inspiration and strength and catharsis, this music isn't mine. I've no right to it. I can only accept it as a great gift, an act of unearned generosity. Hell, I don't even share the faith from which so much of this music came. And to say that this music is art, great art -- which it is -- does not entitle me to any share in it. I am no part of such a dispensation and can only be grateful to have found a quiet place to listen to what I frankly may not and may never deserve.

All I can be is humble. Do you understand?

I wish I did. I wish I knew. I wish I knew what to do and what to do next and what to do after that. I won't say that I wish I could help. (Was there ever a more meaningless contribution to any conversation than that?) I can't do nothing, so I don't, but what have I done to change myself, and my country, and the world that I might not have done anyway, when so much more is required, even if I don't know what all that might be?

Lately, one thing I've felt the need to do more of was shut the fuck up. (I told that to somebody recently and they smiled and said, "that's harsh", but they didn't tell me I was wrong. I'm not.) I still remember the first time somebody told me how important my silence as a white man could be. It was my first time ever in a Women's Studies class. First day, there were about four men. By the second session, there was just me and one other fellow and he either had the sense to not, or a general disinclination to speak up. Not me. About the third time that class met, we had a guest speaker. It was an evening class, and because it didn't meet as often as a day class we stayed longer and had a break after the first hour. When the break came, the speaker came up to me and took me aside in the hall. Ever so gently she burned me right down to the ground. She asked me to look at all the women in that class, and specifically at the women of color and see if I could remember any of their names. Did I remember any of them asking a question, as I did so often? Had I listened to any one of them as I seemed to expect the teacher and all of them to listen to me? She explained to me that women, even grown, better educated, far more intelligent women might defer to me, as a man, even a boy, might let me talk over them as I had, and she could not have that happen again. However good my intentions in taking that class, I brought who I was with me. Time I looked at that before I spoke again. That woman never raised her voice to me and when she saw I was shaken by the things she'd said, she took my arm to comfort me -- me -- and said she wasn't going to call on me again, but if I had any questions she'd stay after class and answer them if she could and did I understand why? And I began to, right there and then.

This is not such a different place we are in now. Makes me sad to say it, but it isn't. Not for women, not for African Americans, not for me. Am I different? Are we?

Nobody needs me to count the ways we are and are not and yet might be.

Another time I remember tonight. I had just started dating the man with whom I would come to spend my life, hadn't even moved in with him yet. I was getting a ride from a friend and like any fool in love I must have talked a blue streak about how wonderful he was and how handsome he was and how lucky I was and on and on I went and my friend? My friend was genuinely excited for me. Neither one of us might have foreseen my good luck, frankly. My friend was a dancer and cute as could be: with thick, natural curls -- it was the eighties -- and long, black lashes with which he could paint a barn, and he was adorable. Were we going to a party? Coming home from a movie? I don't remember. I just remember that when we got where we were going, my lover was there and I got to introduce him to my friend. Nice. Again, someone took me aside then, this time it was my friend and he was furious with me. Why hadn't I told him my boyfriend was black?! Again, I did not understand.  It had never occurred to me to mention that I guess, just as it had never occurred to me that my friend, that a gay man my own age, could have a problem with this. And then he couldn't admit that he did. "It was just such a shock," was what he said.

And again, not just from that instance but probably starting there, I had to learn that being gay did not  of itself make any of us not racist. It sounds stupid to even say this now, but somehow I had thought one thing led naturally to the next, that our oppression made us sympathetic if nothing else to the oppression of others. Maybe it did. Maybe it didn't. The point being that it wasn't enough to change us, any of us, of itself, that sympathy when it was even there. My sympathy didn't change me, didn't lift me anywhere out of who I was, where I lived, what I did. If I changed at all it was because I had to and to the extent that I have, I have had to do that work and still have work to do.

So am I to be congratulated? Do I deserve praise for contributing less than I might have done to the hard times of others? Am I now, unbelievably expecting to be thanked for perhaps taking slightly less advantage than I otherwise might have consciously done as a man? As a white man? Now as an adult man?

Or ought I to sit down? Is that what I should do now?

I am inside my own house and glad to be here. I am with someone I love and that is lucky. I believe in that luck because I know as you can't how many times I might have lost it. I am glad not to go out unless I have to and to try not to bring anything home with me that might kill my husband whose health is even less certain than my own. With this at least I am certain of the right thing.

"If you're ready, yeah
Come on go with me"

That's from another great song from the Staples Singers. I'm listening to it now, again. Well, am I ready?

Mavis Staples has been quoted as saying that she sings these songs, her songs, her family's songs, to inspire us, to keep us going, to lift us up. Am I part of that or am I not? Have I earned that gift or might I yet?

I can't tell anyone what to do now. I can't speak for anybody and right now I wouldn't if I could. I am not enough for this moment. My life is not over, but neither has it been enough. Sitting safe here in my house, knowing what I have, knowing I am loved, all I can say is that mine is not the voice we need. It just isn't. All I can do is ask everyone to listen to voices better than my own, as I must do. Listen. I've talked enough.

I will do what I can, I will try to do more, but I've talked enough.