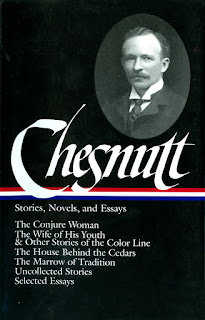 From Wife of His Youth and Other Stories, by Charles W. Chesnutt

"She spoke to them of the hopeful progress they had made, and praised them for their eager desire to learn. She told them of the serious duties of life, and of the use they should make of their acquirements.  With a prophetic finger she pointed them to the upward way which they must climb with patient feet to raise themselves out of the depths.

Then, an unusual thing with her, she spoke of herself."