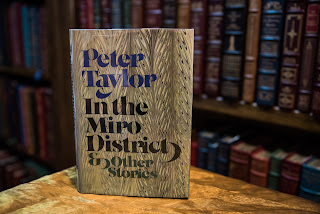 From In the Miro District & Other Stories, by Peter Taylor

"She described what she had seen so graphically I have ever afterward imagined that I actually did look into the room with her. As she opened the door she beheld Lila stark naked except for her hat and shoes and just picking herself up -- herself and her handbag -- from where she had fallen, in the center of her large room. She had plainly been preparing to go downstairs and then go out on the streets of Nashville just as she was."