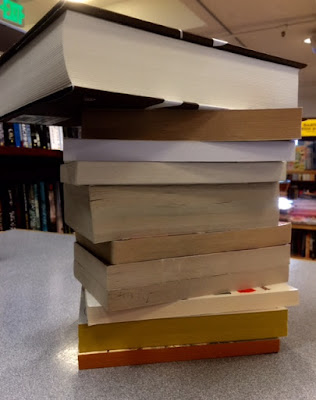 Back when I was managing bookstores, I had a simple test to determine if a new clerk would be allowed to work on displays.  The new hire would be given  a tall stack of a new title and asked to add the books to an existing display.  (This tells you how long ago this was, that bookstores still stocked more than a dozen copies of nearly anything new.)  As part of the test, there would be an empty space near the edge of the table, where the fewest copies of other books were.  If the new clerk moved the books around on the table to accommodate the new title and maintain the basic pyramid with the highest point in the middle of the table, then that clerk would be asked to do display again.  If the clerk simply put the high stack on the empty spot and left them there, teetering at the edge of the table, that was that.  Never again.  If he or she at least put one or two copies in the empty slot and put the rest into under-stock, that at least was a sign that the individual was educable, if not exactly a born aesthete.

I was sometimes rebuked by coworkers, assistant mangers and the like, for not explaining this test to those who had failed it.  I stood by my method, but I wasn't inflexible on the point.  Anecdotal as this system seemed, I can honestly say that I never found a single clerk who had failed this test to be good at display-work thereafter.  Doesn't mean that they might not draw a lovely poster, say, or a letter a sign -- back when we still did those things too -- but, in my experience, anyone who can't stack books in a practical and attractive way on his or her first day working in a bookstore, never will.

Seems a rather trivial task, I recognize, but I found that the instinct was all, in this.  One wouldn't think this would be much of an issue nowadays when, with the exception of bestsellers and staff recommendations there are precious few new books we still get in bulk. Nonetheless, it's still a pretty good test for determining who has the eye for retail display work, I'd bet.

As a dealer in used books, I now have a corollary.

People bring me books in every conceivable container and means of conveyance from bags and boxes to bins and, yes, once in a bucket (!). The best books tend to be in boxes. Not always true. Nothing good comes from a fruit-crate or a lid. Likewise those big boxes from a moving company, meant for towels and linens and other comparatively light but bulky stuffs, those are a bad sign. I've learned some people never clean their reusable grocery tote-bags. (One hopes those were spilled raisins in there.) And there are some well-intentioned souls who put each book in an individual, resealable, plastic bag, as if a paperback and a pb&j were much the same thing. Nothing signals unsaleable used books like those giant, plastic storage-bins. Nothing. No good can come of 'em. Anyone who stores books like loose shoes or pool-toys, isn't selling anything I'm looking to buy.

That said, I usually ask the seller to leave their books, good and bad, in whatever they came in. This is to do with stacking again. Not the aesthetics of the thing now, but the practical incapacity it seems of even the true lovers of books to place one book upon another in a way that doesn't endanger the lot.

An elephant folio* edition of Webster's Encyclopedic Dictionary will not stay at rest atop a thin tower of Nancy Drew. Boswell's Life of Dr. Samuel Johnson, unabridged, was not meant to sit on a mixed stack of religious pamphlets, paperback mysteries, and a collection of National Geographic magazines, sticky with age. Most people can't seem to figure this out. Nothing to do with books, this, though one might be forgiven for thinking better of people who own books. The assumption would be that even a rudimentary understanding of gravity -- all I myself possess -- would suffice to avoid disaster when stacking books. Not so.

Even the biggest, thickest books may be delicate things. The rare and valuable, just like the common and useless, all fall the same way and are just as likely to burst, break at the hinges, or in some other of many ways come to ruin when tumbling off even a fairly low desk. Stands to reason?

But then common sense would tell us it is not a good thing to use Proust as coaster for a coffee mug, or to read a signed-first-edition while sitting in the tub, or to allow a parrot to sharpen its beak -- an instinctive behavior that should otherwise be understood by the pet's owner -- on a First Folio Shakespeare. I have seen all this though, including parrot-damage, save the First Folio. Only humans, so far as we know, can write a sonnet, or even read one, yet the supposed nobility of intellect that makes this so does not prevent our species from dripping nacho-cheese, repeatedly, into a set of Goya prints. Tragic.

But forget the bores and the beastly, ill-mannered eaters of drippy snacks.  How can we not distinguish big from little? Wide from narrow? Heavy from light?

Anyone who has ever had to stack firewood, or china, anyone who has moved lumber, or played with alphabet-blocks in a playpen should have this knowledge, yes?

When I was boy, my father once set me to stacking salvaged bricks.  That went about as well as the above might lead the reader to suspect. My father was mystified that any child, let alone a child of his, would do this six inches from the side of a barn and not in an orderly pile, but as if to be build a mortar-less, freestanding wall, three feet high. No mason, me.

Much later I got my first bookcase, which was a converted jelly-cupboard; high but not deep and older probably than my grandmother's mother. Into this I crammed books until no more could be crammed and then, of necessity you understand, I started piling yet more of my yard-sale treasures on top. I did this until the books on top could only be accessed by standing on the foot-board of my bed. (Wait for it.) One night, my parents asleep on the other side of my bedroom-wall, me tucked in my virgin bed like a lamb in sweet hay, my father woke to the sound of what he thought must be a truck crashing into the house. Finally locating the origin of the crash from my none too subtle cries, Dad burst through my locked bedroom door to discover his youngest son buried alive, my nose for once not buried in a book but bloodied by a bunch of  'em. Ascertaining that nobody was dead and the double-wide intact, my father went muttering back to bed. Had to get up and go to work in GD the morning. Boy doesn't have the sense God give a goose, etc.

Who then am I to judge?

Still, now that I am well past the age my poor father would have been then, I find myself muttering nothing nearly so nice when I watch some otherwise reasonable-seeming soul balancing a physics textbook on a copy of Pat the Bunny, on an empty CD case, on a commemorative thimble from the Seattle World's Fair. Takes everything in me not to talk about rectangles at that moment, but I don't.

Thick as bricks, some of us.

*A book sized just as the name suggests.