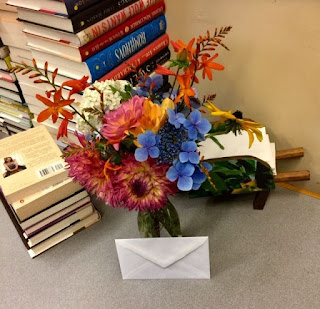 “The proper definition of a man is an animal that writes letters.”
-- Lewis Carroll

My grandmother had what we called a secretary -- really just a small desk with multiple drawers and pigeon-holes and panel you pulled out to write on. Fascinating piece of furniture when I was a kid. She kept her bills in it, stationary, stamps, oddments of all sorts. She wrote letters at it, as intended.  Later she wrote at her little kitchen table, but it's that desk I remember best. One wasn't meant to play with it or on it, but we did. There was a drawer with rubber-bands and little, white paper tags with red string, another with old pens. Come on.  The retractable panels alone were worth a scolding. It was a time-machine, that desk, standing on its tall, spindly legs, facing away from grandma's one bay-window.

It was in that desk I found one of my great-grandma's diaries. That was thrilling. History, right there in my sticky little hand. Perfect Palmer Method penmanship because Great Grandma taught school, but the writing was painfully small as I remember it, so as not to waste paper, no doubt. What family secrets might have been in that little, soft-leather book?!

Nope. Chickens. Eggs. Weather. Bible study. Very disappointing to a boy obsessed with I, Claudius on the television. No intrigues, no incest, no thwarted inheritance, and not a murder to be had. How very boring my people seemed to have been. (When asked if he ever did this or that in childhood; went ice-skating, or ate cotton-candy, the beloved husband will invariably reply that no, "We were too busy struggling to survive." So theatrical, but perfectly true, most times. They were poor, and black. The struggle really was real.)

A proper historian of domestic matters in the American Century would probably be able now to make much more of my great-grandmother's diaries than I did. I realize now that those eggs were income. A chicken "dressed" was not an amusing Internet meme but a meal, or again, money. The weather mattered when one needed the beans or the hay.

My father once proudly showed me a letter by a relative written during the Civil War. Now that was fascinating. It was in a box of old photographs and tintypes, all of people who looked like my Dad, even if we didn't know anymore who most of them were. (My brother is the family historian, so I'm sure he's kept all of this material that may have survived. Probably knows more about the people in those pictures than Dad did.)

I've kept at least the letters sent to me. My father wrote once in awhile, when he had something to send; usually photographs, or a present, but sometimes just to write, or in response to a letter from me. I still have all the letters my grandmother sent. She was a great one for letters, was my paternal grandmother. She wrote letters as a matter of course. Long-distance phone-calls were expensive. Stamps were cheap. Like her mother, she had that legible hand nearly all her life; sharp, orderly cursive that did not require lined paper or a reason to write. Toward to end, her lines started to collapse a little into the right corner and the writing became a bit shaky. There were more words struck through and replaced with better ones in the narrow space above. She became a great one for underlining as emphasis. Some things were more  important than others. She was also a great one for newspaper clippings. Dad was too. Obituaries, recipes, cartoons, local news, though it wasn't always clear why these were included. Usually though there'd be some spidery little annotation, but often as not this would just say, "thought you'd like this."

My grandmother's letters were every bit as everyday as her mother's diaries, if more detailed and considerably less cryptic. Pancake-suppers, car-trips, family, flowers, weather, guilt. "Your Dad works too damn hard," was  a truism evidently worth repeating many. many times, as was "I know your mother misses you." That'll get you, whatever age and distance.

Most of my grandmother's letters were good to get and keep because there was so little in them that depended on time or events in a larger sense.  She voted a straight Democratic Party all her life -- though perhaps a Nixon or a Reagan slipped in there, alas. The radio she listened to was local, as were the newspapers she read and the television news she watched. Time was told in seasons; how deep was the snow, how hot the sun was while she was weeding, the thunder-storm that woke her. The people she knew were family and the friends of family, church, the Grange, the Women's Christian Temperance Union, her quilting circle. The meals she ate she cooked, or for a good cause, or a treat. Her days were her own until the time came and they couldn't be and then the letters stopped.

One or two of her letters I did not keep because they were cruel. She could be a termagant, Lella Belle Craft, née Sopher. She made many a day Hell for my parents, my poor mother in particular. Once in a great while, she wrote to me in anger and was not justified in saying the things she said. I mention this not to revenge myself on her memory, but just to say I knew her as she was and loved her as she was, as we all did, even when she didn't make that easy.

Worth remembering that she wrote to me though, regularly, and I kept nearly all the letters she wrote.

Since my father died, I try to write to my mother every Saturday. Can't manage this some days, but I try.  I work Saturdays at the bookstore and there are mornings that get away from me. When my father died, I was there, home, at his bedside. We all were. When I got back to Seattle, I bought a new box of short envelopes and started writing to my Mum. I still haven't finished that box yet, but nearly. My mother was never much a one for letters, but now and again she writes, mostly to send a present, now and then just to write. We talk regularly and once a year I still get back to see her for a week or two. In the meanwhile, I write -- well, type. Nobody needs to try reading my handwriting anymore, bad at its best.

My letters aren't much more than what you'd think. I mention the weather, ask after her health, tell her about ours. (A friend likewise middle-aged calls this endless conversation about health the "organ recital.") I tell my mother about work. I complain. I talk about my sister and her family and my brother and his. I will mention politics and current affairs because how could I not? but that's seldom the point.

I read and collect books of letters from nearly all my favorite writers, the letters of historical figures, anthologies of letters. I've read nearly all the published letters of Henry James, of Marcel Proust, and Charles Lamb, and Samuel Johnson, of William Cowper and Edward Fitzgerald, of Mencken and Bishop, Walpole and Woolf. I love published letters for what they say of the times and for the company of the writers. As a literary form letters come somewhere among my favorites just after personal essays and well before short stories or criticism. I have a whole case in my library of just letters and more besides.

Despite my fondness for the literary form, or perhaps because of that, I make no claim for the letters I write now to my mother.  If anything, my letters are proof of no special talent. What they are, I hope, are just evidence of my devotion to my mother, itself no special thing. Who doesn't love his mother? (Not strictly true I know. I have friends who have mothers to whom no devotion is due.  One needn't be Nero to not like Agrippina. I get it.) I write to my mother then because it is something I can do, a way to remind her that she is always in my thoughts, that I am grateful that I got a good one. I write to my mother in the hope it will please her. I write to my mother because I love her.

And I write to my mother because my father is no longer there.

I write this, as I write letters to my mother, to make myself feel a bit better in his absence.

We do what we can.