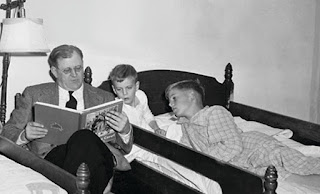 From Democracy in Chains: The Deep History of the Radical Right's Stealth Plan for America, by Nancy MacLean

"At first it seems hard to imagine why a man who had so much would become consumed with a need to take down those who just wanted 'some more' for themselves 9in the immortal words of Oliver Twist). The answer, to the extent that one can be found in the mysteries of individual human personality, lies in a childhood in which fighting was a leitmotif and government was always the enemy."