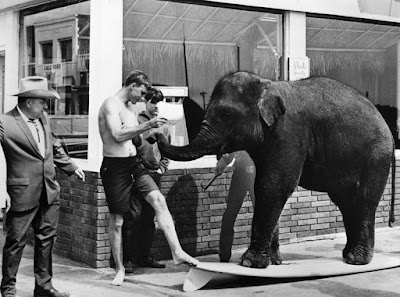 From The Library Book, by Susan Orlean

"The most popular photograph in the library's photography collection is of a five-year-old elephant named Bimbo Jr. riding a surfboard. The picture ran in the Los Angeles Herald in 1962. According to the caption, Bimbo Jr. had 'the rare distinction of being the youngest elephant to perform this remarkable feat,' a peculiar sort of caption that implies that other elephants surf, too, and Bimbo's specialness was only his tender age."