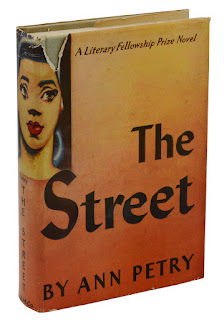 From The Street, by Ann Petry

"Despite the lateness of the hour, groups of men were still standing in front of the Junto Bar and Grill, for the brilliant light streaming from its windows formed a barrier against the cold and the darkness in the rest of the street. Whenever the doors opened and closed, the light on the sidewalk was intensified. And because the men moved slightly, laughing and talking a little louder with each sudden increase in light, they had the appearance of moths fluttering about a gigantic candle flame."