Young Lochinvar Quite Gone in the Teeth


"O young Lochinvar is come out of the west..." 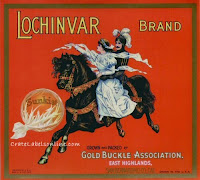 There was a time every school-child could reel off that poem, when that first line was a punchline to jokes that needed no explanation, when writing narrative poetry could make a fellow's fortune and guarantee his fame if not, alas, his immortality.  Of all the products of Sir Walter Scott's pen, none I should think had a wider reading, was more often parodied, and it seems none was ever put to so many commercial uses, selling everything from flour to bicycles. 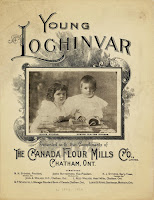 In Scott's epic poem, Marmion (1808) Lochinvar is but an episode from Canto Five, albeit the best known and most charming.  Our hero is a frustrated suitor who arrives unannounced at the wedding of Ellen, his beloved.  She is about to be married to “a laggard in love and a dastard in war.” Can't have that, now can we?  So, young Lochinvar claims one dance with the bride and promptly dances her out the door, onto his horse, and off they go, hotly pursued, etc.! 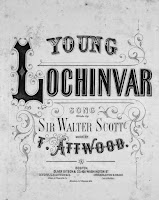 Marmion, A Tale of Flodden Field was Scott's second great poem after The Lay of the Last Minstrel (1805.)  So successful had been his first epic, Scott was offered a thousand guineas by the publisher Archibold Constanble for his second, sight unseen.  That rather pricey first edition sold out it's printing of two thousand copies in less than a month. Twelve more editions followed between 1808 and 1825. Marmion and the rest of Scott's poems were never out of print in the English speaking world for the next hundred years or better.

As can be seen here, over the century and better of its great popularity, Young Lochinvar was set to music, variously illustrated, made into a comic book, distributed as a free promotion by The Canadian Flour Mills, and used to sell just about anything; lending romance to an orange-crate and dash to a bike-ride, with poor Ellen presumably balancing on the back wheel.  Ubiquitous was the word.

I've been trying to think of some contemporary equivalent and the nearest I've come would be a song by the Beatles: something with which everyone from Granny to the nippers might sing along down to the pub, if they still do that sort of thing, or in the car on a road-trip, or at karaoke, come to that.  Needs something with words so familiar as to punctuate a joke by a late-night host and or #hashtag on the Internet without further explanation.  The comparison requires something so popular for so long already as to potentially last 100 years and Lennon & McCartney seems likelier than anything I can think of from the pop-charts just now.  The only other poems I can think of with anything near the staying power of Scott's would be Henley's "Invictus", maybe "Casey at the Bat", and certainly "A Visit from Saint Nicholas" by Clement Moore, with only Ernest Thayer's baseball mock-epic coming close to anything like the narrative drive of Scott. 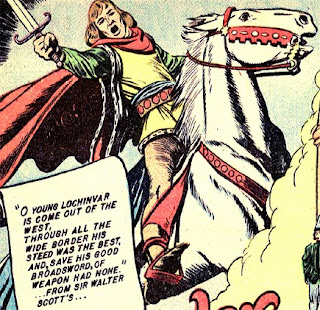 I read my way through Scott's poems this year, between novels and chapters from the biography.  There was no struggle to it, no special effort or study required -- though the small print in my edition did necessitate a magnifying glass at last.  I'm confident that the modern reader need not know the history -- both in the poems and of the poems -- any better than I did when I started to enjoy the experience.  I find it's more the idea of heroic couplets and rhyme that puts people off rather than the actual reading.  The form's now unfamiliar, not to say foreign entirely to most readers.  The trick of it is though that the very things that now put readers off: the uniform lines, the history, the romance, are the very things that can carry us quite happily along, as they did our ancestors, if we let them.  Admittedly, there's little enough reason for any but the eccentric to read straight through Scott's poems as I did, but Marmion proper might serve for any who might be inclined to try, if just for curiosity's sake, one of the last triumphs of one of the oldest forms of literature.  Byron's Don Juan would offer a more recognizably modern attitude, but hardly in a less antique fancy-dress than Scott's.

That may be the problem for modern readers, the ease of the thing.  Not that there aren't unfamiliar words and bits of Scots, there are, but reading Scott's poems may feel too easy, like reading something written for long-dead children.  Marmion was no more written for kids than Ivanhoe was.  We are just out of the habit of heroes and honour and rhyme. 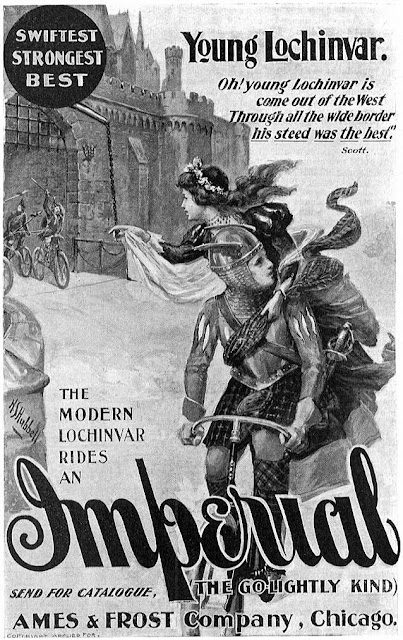 Far be it from me to argue for the return of the epic hero.  Never could much stand the chivalrous or the mystic destiny of ancient peoples.  No.  If Lochinvar is no longer young, is in fact  all but gone in the teeth and forgotten, I'll not much mourn his passing.  Unlike Scott's novels which I am convinced might have more readers than they now do and deserve more, I can't tell anyone he or she ought or must when it comes to wicked Lord Marmion and the virtuous Clara de Clare, et al.  All I can say is, why not?  There's fun to be had in Flodden yet, there's real history there, and romance, yes, and a genuine mastery of verse-making.   So why not know a little something of what set great-great-grandma's heart aflutter when America was herself but young and gay?

“Look back, and smile on perils past!”

I've had more hours entertainment from Scott's poetry now than from a shelf or more of the poetry I owned and read well before I took up with this old-fashioned fellow, Scott, the Last Minstrel.
Posted by usedbuyer 2.0 at 11:49 PM