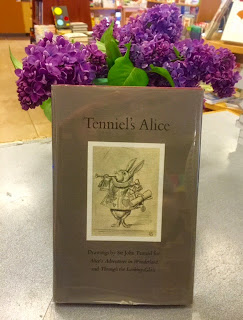 "and what is the use of a book," thought Alice, "without pictures or conversations?"

Ah, the books I do not need!  The list is long, sometimes illustrious and full of things I want.  It's not as if everything I already own will ever be read.  There's that to keep in mind, if only I would.  Then there are all the books I can never afford, but that's entirely too awful to think about at all, so let's don't.  All I mean just here are those books that actually pass through my hands at the bookstore, books new and used that I no more need than I need another slice of cake: art books, graphic novels, reprints in better covers and variant editions of books I already own in various editions, new biographies of people whose lives I've already read and read and read again, better copies of books I own and better books than the books I'm reading, books about books and books about books about books.  There must be some rules even if I intend to break them regularly, no?  Yes.

Thus I have avoided collecting books about books generally and gotten rid of most of the books about books that I ever owned.  More, while I love certain children's books and have, for example, no less than three editions of Lew Carroll's Alice books already on my shelves, I have tried very hard to avoid collecting Alice in any serious way, as I know this could easily become one of those obsessions that end up as segments in rather depressing reality TV.  You know the one's I mean, where some terribly cheerful little fellow invites the film-crew in to admire his Disney memorabilia or his storage shed full of vintage lunch-boxes, or his library of Little Golden Books which preclude him access to his shower or any way to escape in case of an electrical fire.  My books as they are are bad enough, thank you, but I like to think that even my Dickens, by and about, still not so unreasonable as to threaten a visit from the fire inspectors.

The great illustrators, from Caldecott to Searle, are a great temptation to me.  I try not to allow myself too many books the only point of which is to have the illustrations.  Books I already own in other editions, books I don't ever want to read again, about the only thing that can make my fingers twitch these covetously from the bookstore shelves are great illustrations.  A new introduction can be read at a lunch.  Ronald Searle's Animal Farm requires study: snorting, cackling, google-eyed admiration and close, close study.

For me, the illustrations of classic children's books tend to fall into one of three kinds: 1) the insupportable -- think anime-influenced anything; big-eyed version of Dorothy and The Wonderful Wizard of Oz, or The Three Musketeers "reimagined" as comic-book robots   2) the unnecessary but inoffensive, as in Tasha Tudor's Wind in the Willows, inferior to Paul Bransom, Ernest H. Shepard, and Arthur Rackham, etc., but not so bad as all that, and finally, 3) Pictures inseparable from the text.  As I've just read in this little book, the idea of Lewis Carroll's Alice with Sir John Tenniel's pictures is as unimaginable as "Gilbert without Sullivan."  'deed. 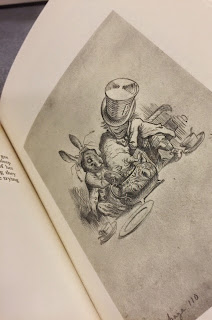 So then, very much in the category of books I do not need, I offer Tenniel's Alice: Drawings by Sir John Tenniel for Alice's Adventure in Wonderland and Through the Looking Glass, copyright 1978, from the Department of Printing and Graphic Arts, Harvard College Library in Association with The Metropolitan Museum of Art.

It's a slight thing; all of ten pages of informative, curatorial introduction, followed by roughly thirty plates.  Facing each plate there is the usual and repetitive description of materials used, to wit: pencil, ink, and "china white," which turns out to be neither the band nor heroin but a kind of wax or chalk. (Who knew?)  More helpfully, each plate faces a brief quotation from the text illustrated.  (Among my Alice books, there's an edition with Lew Carroll's own illustrations, which are charming and quite goofy in a way that seems quite modern now.  These were deemed to be too amateurish to be used in the original publication, a fact all the more astonishing to consider when reminded that the author paid for the original publication himself!  Still, without that bit of editorial snobbery, we wouldn't have the Tenniel pictures and that would be a great loss indeed.)


Lewis Caroll had some very specific ideas for the illustration, even if the pictures were not to be his.  Only fair, even if he hadn't been paying.  The very idea of illustration means making art in service to the words or it's just so many arbitrary interruptions of the text (see every book of poetry ever "illustrated" by some second-hand copy of Rothko drawings or equally abstract blocks of gray.)  It is fascinating then to see these so familiar pictures when still, as it were, in conversation; subject to suggestion and correction, unfinished, some of 'em, even a bit crude, at least as compared to the printed pictures if to nothing else on earth. 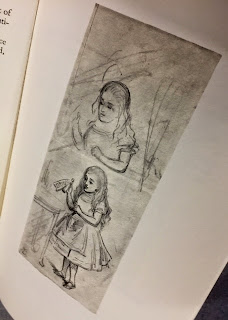 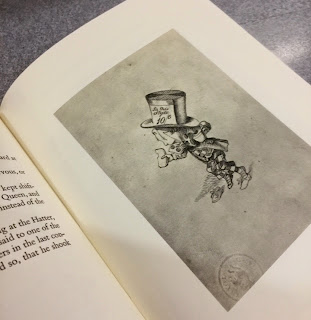 The finished pictures, I learn here, were the result of wood-block-printing, a process that even once described still sounds to me impossibly fine and now hopelessly lost, I should think.  Imagine, each drawing basically copied onto a thick square of hard wood and then everything that will be white on the page is painstakingly cut away, leaving only these finest of lines.  What craftsmanship!  Worth it just to have handled this little book to learn something like that!  (Do any of those blocks still exist anywhere in the world?  Have any of the ones that illustrated Dickens survive?  There must be a book on this somewhere...)

Having pawed the thing for days, I've finally decided to put a tag on it and put it out for sale.  I don't need it.  Glad to have had the chance to read it, and to stare at the pictures and turn the pages many many times now.  I don't need to own every book.  Better a real scholar of either Tenniel or Alice find it.  Still, I'm glad I saw it.

And now to find something on the Brothers Dalziel, master English block-cutters.  Now that's a book I'd have to buy.