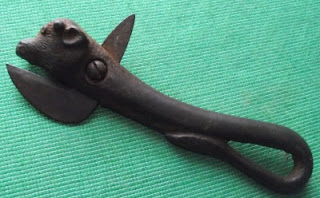 From Three Men in a Boat, by Jerome K. Jerome

"Then Harris tried to open the tin with a pocket-knife, and broke the knife and cut himself badly; and George tried a pair of scissors, and the scissors flew up, and nearly put his eye out.  While they were dressing their wounds, I tried to make a hole in the thing with the spiky end of the hitcher, and the hitcher slipped and jerked me out between the boat and the bank into two feet of muddy water, and the tin rolled over, uninjured, and broke a teacup."