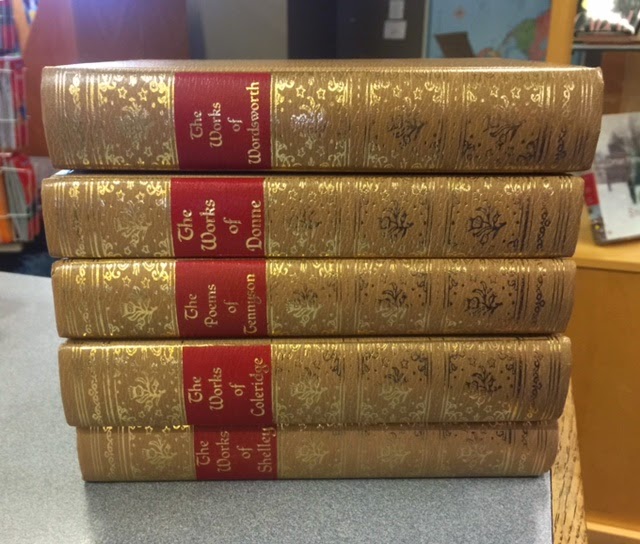 Here's the text of the ad that used to run, among other places, in the Parade Magazine in the Sunday paper:

Please reserve in my name the handsomely bound volumes of The Giants of Literature Series.  Send me at once the first three: SHAKESPEARE, KIPLING and DE MAUPASSANT.  I enclose no money in advance.  A week after receiving my books, I will either return them and owe nothing, or keep them for the special introductory price of only $1 (plus a few cents mailing charges) for ALL THREE.

Then, as they are printed, I will be entitled to receive additional volumes on approval, for only $3.98 each (plus a few cents mailing charges.)  I am to receive advance descriptions of future volumes.  I may reject any books before or after I receive them.  And I may cancel my reservation at any time.  (Books shipped in the U.S.A. only.)"

This followed with a form for the subscriber's name address, and zip-code.  (I quote from a version of the add from Parade, circa 1971.)

We get individual volumes in this series, "The Giants of Literature" periodically at the used desk, though not usually so many at one time.  Most often, and unsurprisingly considering the text of the ad above, Shakespeare, Kipling and De Maupassant.  Just yesterday we got Tennyson, Shelley, Wordsworth, Coleridge and Donne.  Never saw the Donne before, but the rest were familiar.  We sell these for $5.99 apiece, used.  Most of the copies we see have never been opened, if the stiffness of the covers is any indication.  Meant more for decoration than otherwise, one assumes. 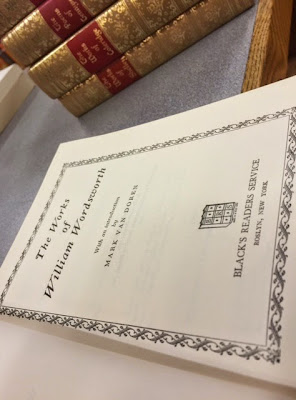 That said, they are attractive enough little books, and perfectly serviceable editions, if unhappily free of footnotes, indexes and introductions.

In the first place, I note them here because such book club editions seem to have all but disappeared as a publishing business model, though cheap reprints still flourish and the copyright free classics are still to be found in chain-store editions and the like.  This suggests that while subscription-based clubs have indeed gone the way of the Fuller Brush Man, there are still plenty of buyers out there for the unread classics.  And that would be my other reason for mentioning here the products of Black's Readers Service and Walter J. Black, Inc.

As a dealer in used books, I am always pleased to find old books in pristine -- unread -- condition.  As a recent and devoted reader of Alfred Lord Tennyson though, it seems a little shocking to crack open seemingly for the first time a hardcover copy published as long ago as 1952.  Has there really never been anyone before me even so curious about the old boy as to have a peek inside?

One of the first lessons learned working in a bookstore is to not be hurt by the neglect of the classics.  It's alright to push them on people, to remind the reader that he or she could do worse than to read a bit of Wordsworth, but one mustn't despair when a particular edition of some monumental work or canonical author ends up on the clearance shelf or mark-down table.  The poems of John Donne have survived for better than 380 years.  I see no reason to think they will not survive a Penguin going out of print.

It's ironic that these seemingly unread editions are actually a comfort to me, but they are.  While the original subscribers of "The Giants Of Literature" from Black's Readers Service may never have opened these books, I have more confidence in the readers of used books.  At six bucks a pop, nobody will be looking to impress with one of these.  I would bet there's nobody buying these books just to decorate a shelf.  I believe these books will be bought and read.  The fact that used copies of all these poets continue to sell and circulate regularly tells me that their readers are still numerous enough to justify, for example, more than one used edition of Browning on our shelves, and that, to my mind, is a very good thing indeed.

And if it turns out that poor ol' Tennyson ends up, yet again unread on a shelf this time, remember, no one -- but poets, presumably -- lives forever, and so, dear reader, that will just mean another pristine used copy for the next fellow.
Posted by usedbuyer 2.0 at 12:30 AM