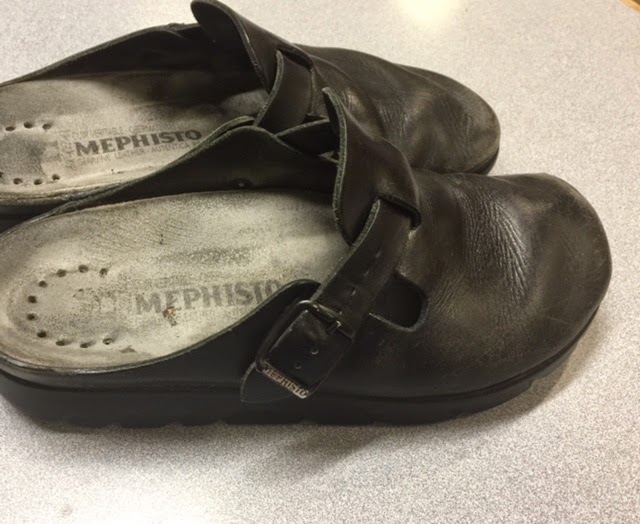 Thinking about shoes.  I don't often.  I own, I think, five pairs, including two pairs of expensive sandals I bought when we lived in Southern California.  Those don't get much use since we moved to the Great Northwest.   I own a pair of sneakers that likewise don't see the light of day much any more.  Mostly, I wear the same pair of clogs every day, rain or shine.  The manufacturer is Mephisto, a European company known for what might best be called, practical footwear.  Mephisto has stopped making my favorite clogs, which meant that a year ago I spent almost as much on having my shoes repaired as I spent when I bought them.  There's nothing to say for their style but as design, I think, there was much to recommend my clogs.  The most comfortable shoes I've ever owned, they fit perfectly my fat little hooves ( wear a 6 1/2 wide, in American measure.)  I mourn the passing of their production and wonder what I will do when my present pair become unrepairable.

I know there are people who love shoes.  I live with such a one and I know plenty more.  I understand something of the urge, already owning lots of shoes, to buy more.  I like nice things.  I shop.  I don't shop for shoes much, obviously.  Seems to me one can only use shoes going outside, and I don't do that but of necessity so, no, not my thing.  But, shopping, buying?  I get that.  With me of course, it's all 'bout the books. 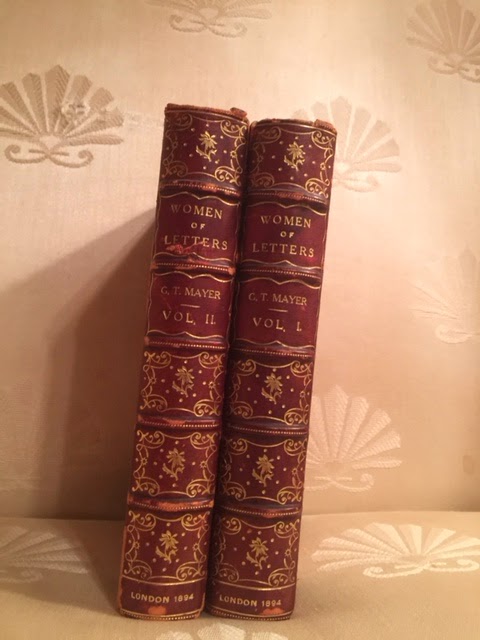 My most recent acquisitions from the trip to Powell's in Portland now litter the floor of my office; some in neat stacks, some on my desk, and some stray volumes upstairs on my nightstand.  Not all are pictured here.

The dear friend with whom I've been book-shopping this past week has gone home and with him then that first thrill of discovery and purchase.  Now I'm left with what I got and the leisure to consider the lot, the loot.  That's a pleasure in itself.  Before I've really read a word of these books, I admire them; note the publication dates and editions, look through the illustrations if any, study the bindings and the design, and congratulate myself on having found them, on now owning them.

The prettiest things -- pictured above -- were a gift. I'd taken them from the shelf in the bookstore and perused them, coveted them, and, having read the price-tag, I put them back.  I did this more than once.  I made the happy mistake of showing them to my friend and fellow bibliophile, and then tried not to think about them again.  When we finished our first day of book-shopping and returned to our hotel, I was abashed and not so secretly thrilled to discover that my friend had bought them for me!  Bless his generous self!  (I hadn't hinted, I swear.)

It is a two volume set, from 1894 of Women of Letters, by one G. T. Meyers.  Never heard of the books or the author, but love the very idea of these short biographies of English women writers from the 17th, 18th and 19th Centuries.  Mary Shelley might be the only author most people would know, but I'm excited to find brief lives of novelists like Mrs. Elizabeth Inchbald, and Amelia Opie.  I'm as excited to find, particularly in the first volume, women writers of whom I've never heard.  I love such discoveries!  New possibilities for reading!  New, old books to hunt for and buy! 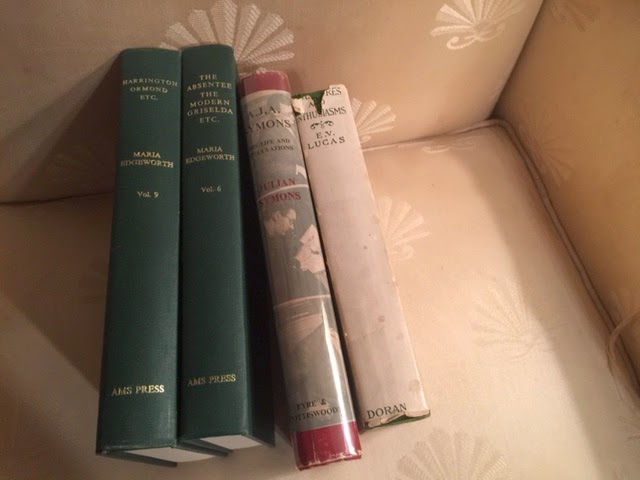 I bought two stray volumes in library binding of the novels of Maria Edgeworth, "the Irish Austen."  I already own at least two of these short novels, but the rest I've never seen and so will have the treat of reading more of Maria.  She's a delightful writer, quite accomplished in her way, and this despite in many ways the rather oppressive influence of her father, himself a writer, with whom she collaborated and who saw to the editing and publication of much of her fiction.  Her work survives even his often heavy-handed parental enthusiasm.

Then there's a biography, previously unknown to me, of A. J. A. Symons, most famously the biographer of Frederick Rolfe.  Symons' book, The Quest for Corvo (1934) is a classic of gay literature in it's own right and a masterpiece of writing around the unsayable.  It is also perhaps one of the earliest examples of that modern biography that is as much about writing the biography as it is a book about the subject.  This biography of the biographer is by Symons brother, the mystery writer and critic, Julian Symons.  This would be the first of the books I bought that I opened in the hotel.  Fascinating stuff.

Then there's yet another volume -- with a rare dust-jacket -- of essays by E. V. Lucas.  He's a favorite of mine, a biographer and editor of Charles Lamb, and one of the last great practitioners of the Gentleman of Letters tradition.  I love him. 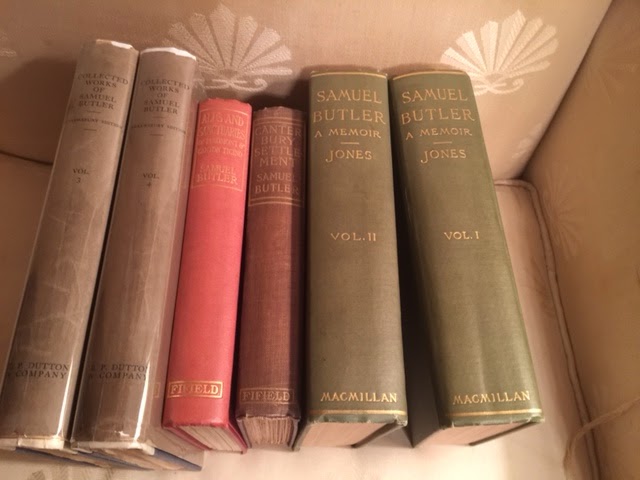 Finally tonight, there are four more volumes of Samuel Butler, and two volumes of memoir about the same.  I collect Samuel Butler, author of Erewon and The Way of All Flesh.  In all his loopy, Victorian glory (1835 - 1902) he represents the best impulses of the sometimes eccentric enthusiasm of that most enthusiastic age.    Can't get enough.

There were other books, books I'm already reading now, but I mention these here just by way of showing how my shopping, if less than thrifty, is still not so much a problem nowadays as it might seem, were I, for instance, to develop more of a taste for, say... shoes.

I'll be reading these books well after my next pair of repaired clogs fall to pieces.  An investment then, better even than new slippers.  (I do love new slippers.)
Posted by usedbuyer 2.0 at 11:18 PM