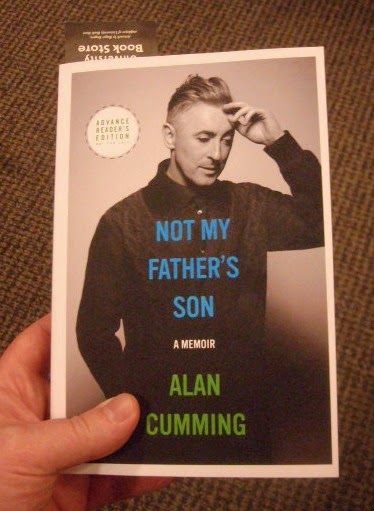 "It's really hard to talk about being famous."

He does go on to say, "Being famous is mostly great.  I have a really amazing life."  And so it would seem, but this book isn't really about that, or rather it is, but only incidentally.  As memoirs go, and an actor's memoir at that, this is an exceptional one, and that may be why.

I like theatrical memoirs, actors' biographies and autobiographies, theater stories and backstage books.  Generally speaking, these are some of my favorite light reading.  When I'm knee-deep, as I am now in some 19th Century history of an 18th Century event -- the second volume of three of Francis Parkman's   Montcalm and Wolfe -- there's no better break, for me at least, than a good Edith Evans story, say, or a spare evening spent reading all about something Maggie Smith got up to when Desdemona caught her sleeve on Othello's broach.  Just lately, there's been a spate of new theater books and biographies.  I must have read half a dozen or so in the past month.  I'd assumed Alan Cumming's book would be just another.  It's not.

If the reader is looking for the low-down on filming Spy Kids,memories of Natasha Richardson, or stories about being either Macbeth or a mutant in X2, this isn't that book.  In point of fact, this really isn't a theatrical memoir at all.

As it happened, when he was ready to set off on this genealogical journey, for reasons that will become obvious from the very first page of this book, Alan Cumming hadn't spoken to his own father for years.  This estrangement just happens, in the way of bad things generally, to come to a crisis at a most inopportune time, in this case, during the filming of the television documentary that will send the actor about as far from Scotland and his family as he could go.  The book then travels with him back and forth, between Scotland and the world, between his present happy life, and his unhappy childhood, between his father's last betrayal, and his maternal grandfather's suspicious death long before Alan Cumming was born.  The great tension in the book comes from the tug of all these stories, as each narrative in turn pulls him first in one direction and then the other, often without time enough to so much as catch his breath between -- and all this, mind, while he is still a working actor with commitments that take him in entirely other directions as well.  Makes for an exciting story, all that tangle of conflicting needs, responsibilities, curiosity and pain.

"After a while, I began to enjoy this Alice-in-Wonderland-like experience.  We all did.  In his drunkenness our father was no threat to us, and more than that, he was no impediment to the continuation of our daily routine.  Sitting at that table night after night was terrifying.  It would be again tomorrow, no doubt, but tonight, with my father snoring, and us passing the biscuit plate over his head, we could breathe easy."

It is worth noting just here that, much as this is the story of an artist of necessity exploring his past, this book might as easily be described as an exercise in Scots character, as all the characters in it, including Alan Cumming himself, are very much representative in their way of that harsh and beautiful place.  The resulting memoir has less then to do with the man so familiar to film, stage and television audiences, the handsome actor pictured on the cover, than with understanding the haunting face of the little boy in the photograph that faces the first chapter.  The photographs included here, are again more important than they might otherwise be, in the more usual sort of celebrity autobiography, exactly because the faces are for the most part not familiar; the meaning of the pictures, the history they represent and conceal, and the stories that might otherwise have been lost or undiscovered, are at the very heart of this book. The photograph of his war-hero- grandfather that hangs now in Alan Cumming's home, tells a very different story than the one he thought he knew, likewise the family snaps that take on darker and more complicated meanings as both the memoirist and his reader come to know the real history of those clouded outings on stony beaches and half remembered fun fairs.

One of the uses to which Alan Cumming has already put his celebrity has been to raise money for and awareness of various charitable and political causes.  He might be forgiven had this memoir been written just to do something like for the subject of abused children and mental illness.  Had he done so, he would hardly have been the first famous person to use an unfortunate childhood to gather greater sympathy and attention from established fans and the general public.  I don't think that that is what he's about with this book.  He's still sorting himself.  There is no one redemptive moment that makes for the more usual happy ending here.  This, in many ways, is rather the story of a middle-aged man, admittedly of uncommon talent and tenacity, who by pure happenstance found himself pursuing truths the implications and repercussions of which he may never fully understand, even now.  If there is an inspiring story here, it is in his acceptance of what he can't know as much as his satisfaction in such mysteries as he's been able to solve.  It's that that makes Not My Father's Son not simply an unusual memoir for an actor, but a surprisingly moving and wise book.
Posted by usedbuyer 2.0 at 4:58 PM