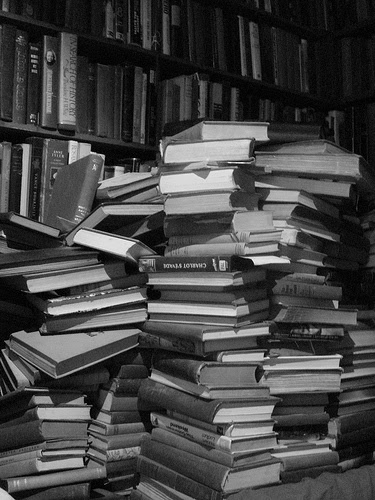 "No sooner is a temple built to God, but the Devil builds a chapel hard by,"
- George Herbert's Jacula Prudentum.

One of the problems with having so many books is finding them when they're wanted.  Now that may not be true for the well organized collector of discreet subjects, or for the aristocratic proprietor of some national heritage collection, but for the expansive autodidact, also known as a hoarder, like me, there are few frustrations greater than knowing one owns Walton's Lives, and a little two volume edition of Dr. Johnson's Lives of the Poets, and after a considerable hunt, being able to find only the volume of Johnson not wanted.  Maddening.

My books are all flat and dry, mind, and kept clean of insects and damps and all the other horrors hoards are heir to, but I can no longer claim any organization to the books acquired in the last few years.  My groaning shelves have long since filled.  Now an ever expanding heap occupies half of my office floor.  So embarrassing.  It's not so bad as to get me onto reality TV -- yet -- but then, I'm still young-ish and loved.  Should my circumstances change someday, who knows?   I may still earn an obit like the Collyer Brothers.  I picture something along the lines of:

So, why I was searching for George Herbert (1593 - 1633), specifically his Life, by either hand known to me?  A young friend was sufficiently interested by the bits & bobs of Herbert's that I quoted to be curious about the poet's life and work.  Hoorah!  Besides finding a very slim Essential Herbert to send her, I thought I might include something by way of biography.  I immediately thought first of Johnson, and then Walton.  I thought I might just dig out my copies of both and loan them, something I never do anymore.  Clearly, I was giddy at the prospect of sharing the Good News of the Right Reverend George Herbert.  Seemed worth making an exception to my rule.  My friend hadn't heard of either Walton's or Johnson's books.  UntilI could find another copy of either, I thought...

Well, I failed.  Eventually, I managed to find both Walton's and Johnson's lives online in a format I could print off and give, but not the same thing as a proper little book.  (I'd tried my favorite neighborhood used shop with no luck; for a better edition of Herbert, or either biographer.)

The good news from the bad here is that I'd aroused at least one reader's curiosity about George Herbert by what I'd written and or read aloud.  Not the first time this has happened, may I say, but not to worry about my head swelling.  The times anything I've done brought a new reader to an old book I can still probably count -- if not just on my fingers and toes, then with perhaps one additional hand.  I'm not talking about recommending books at the bookstore.  That I would hope I've done well enough for the better part of three decades now.  This is different.  I'm not selling anything.  I'm evangelizing on my own time here.  It's more personal.

It might seem a distinction without much difference, but to my mind at least, putting books into the hands of my customers and getting them to buy and presumably read some of them is selling.  Getting someone who's never read Herbert, or Walton or Dr. Johnson,  a book or two of her own, that is a good deed.  More even than that, it's a mission.

It's all to do with this rather vague business of reading "hard books" that I was on about not but a few days ago.  I should have remembered that one of the difficulties associated with reading some of the hard stuff can be finding the hard stuff.

I've looked in four shops since I started reading Herbert, trying to find the usual Oxford or Cambridge standard editions, but no luck.  This was for me, mind.  All I have is the little Pocket Poets edition.  All well and good, but I want more, and with more supporting material.  I also now rather desperately crave  Herbert's aphorisms, of which I only recently learned, Jacula Prudentum et al.  That may just be impossible for now.  I was shocked to not find find but one rather iffy collection of poems and prose available for reprint on the EBM.  I thought for sure that would be a simple thing.  Maybe not.  We'll see.

And then there was Walton & Johnson, and I own those already.  That's just embarrassing.

When there's a book I intend to recommend to a customer and I don't find that book on the shelf, I move fairly smoothly I hope to another, and or another until I find one I can sell.  Doesn't work when I'm trying to make actual converts.

This of course brings up the old debate about bookstores and backlist and how much we must stock of the best books even if nobody buys them, but sadly that debate would now seem to be over and my side lost.  There's just no economic sense to be made from keeping all The Greats ready and waiting.  Come to that, I actually prefer used hardcovers myself, but that's a waiting game at best and clearly not something on which one may count.

What this reminds me of is simpler and sadder than all that shop talk from ten years ago.  Even if one wants to take on a poet like George Herbert, what is one to do nowadays?  Be satisfied with what there might be on Poemhunter.com?  Oh, the poems are there, right enough, I should say, but a book would still be a better way at them; negotiating even the friendliest website still seems a cumbersome business compared to just opening a book.  And then there are issues with the organization of things online, and the arrangement of poems, like some of Herbert's most famous, that were meant to look a certain way on the page, etc.

How do we, most of us, meet great literature?  I would hazard that it's still usually as students, in textbooks, or what's almost worse, in those cement block surveys from Norton.  (Who ever picked up a three pound paperback printed on Bible-thin paper to read poetry for pleasure?)  Who isn't intimidated by literature packaged as materials for review and with test questions helpfully included at the end?  Pah!  All well and good I guess for a classroom, but I don't like poetry intended for classrooms or what classrooms so often make of poetry.

So then what to do, in our enthusiasm when, between friends, we want to read a poet together?  I worry that the impulse will fade before the right books have been found.  I worry that even should I bring a little light into some relatively dark corner, my candle won't last.  (I'm a bit of a fair weather friend to most poets, I fear.)  Well, devil take modern times, for all the convenience of them!

I can't in good conscience blame the Interwebs or bookstores for the books I can't find today, or for the books I lost in my own house, obviously.  Actually, access to literature old and new has probably never been easier than it is as of right this minute.  If I cannot quite get at everything ever written just when I want it, well that doesn't mean things aren't better than they ever were.  I get it.

Still, I can't help but fuss.  I've adopted the modern impatience: I want what I want when I want it and I want it NOW!

Herbert would neither understand nor approve I'm sure.  Let him be a lesson to me.  I'm sure my friend will understand.  I just hope, by the time she gets the package I sent, that she even remembers our conversation, though I'm sure she will.

Hope I find those damned missing books.  Hope I can read fast enough to have read at least most the books that may eventually kill me, for that matter.

"Hope is the poor man's bread."-- that's also from that book of aphorisms I can't bloody find anywhere, by the way.
Posted by usedbuyer 2.0 at 10:26 PM