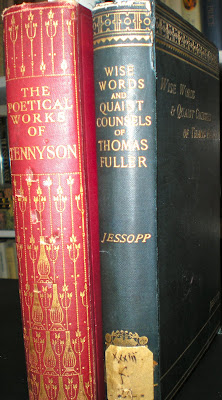 I broke my damned book. It's happened before, of course. I am clumsy. Once in an airport I dropped Edgar Allan Poe down about four stories in an open staircase. Didn't end well, for poor Edgar. This time, I set my book down on a railing -- yes, as stupid as that sounds, and is, I did it -- and it fell and broke. The book is an old one. There is no printed date of publication, but a previousowner has written his name and the date of 1912 on the flyleaf (in that perfect Palmer penmanship that disappeared with our grandmothers.) That makes this copy of The Poetical Works of Alfred, Lord Tennyson at least as old as that. That means that it is also a pretty sturdy object, to have survived for one hundredyears and at least three owners before me -- there are two other names on the flyleaf, one written in pencil, the other represented by one of those little address label that used to come from the American Heart Association or some-such. There are a couple of small holes punched in the spine, probably from resting on something that wasn't meant to have a book again' it. Treated pretty well otherwise, I'd say. Then I got hold of the old darling -- and dropped it.
I can't say that the book is a very pretty thing to begin with really, or even that it was specially well made. The text is printed in double columns, which is not very musical in the reading, and particularly annoying with Tennyson's mostly long lines. Squeezing as much as possible onto a page in this way was a not uncommon publishing economy of the period, specially in a crowded volume of better than four hundred pages. Cheaper editions of this kind made complete or at least collected editions of major writers available to a wider audience than the more expensive, "cabinet" editions of a major writer's work, which might run to multiple, pricey volumes. Poets, whose work actually suffers more than prose by narrowed margins and unhinged lines, were likelier than novelists to be compressed in this way, for obvious, typesetter's reasons; poems being for the most part discrete little objects of a definable size and shape, at least, used to was. Prose was not immune to the packing in of doubled columns. We get such things at the used desk all the time. There have been, for instance, single volumes published as late as the 1940s with title like "The Works of Balzac" (!). Fat Balzac indeed, but not nearly big enough at half the font! (And this double column, Bible-style printing still happens in some textbooks and those academic cement-block-anthologies even now, mores the pity.) The binding on my Tennyson is tarted up with a bit of gilding on the spine, but really it has just old cloth boards to cover it, and paper hinges to hold it.
Which they did, until I dropped it.
I've kept the book because it suits my reading just now of an excellent biography of the poet, titled simply Tennyson, by one Michael Thorn. To be honest, I'd never heard of Mr. Thorn before, but when his book came in used, I liked the look of it, opened it at lunch that day and found it good, even quite amusing, if you can imagine that in a biography of Victoria's great somber laureate. I'd come to like Tennyson, at least when young and in company with his equally charming -- if unequally gifted brothers, Charles & Frederick, when met in the life and Letters of dear ol' Edward Fitzgerald last year. So... why not a full-length biography then, of the great poet? Quite good so far, quite good, and here are the poems for me to read at each meeting in the biography. Some of my favorite sort of reading, and not to worry, toting my poor old poems around with me, as they are now already so much the worse for wear, no? I glued the hinges, and did what I could, but it is still... not what even it once was.

And then the other book I've repaired most recently, now that is a somewhat rare thing, at least it is the first time I've encountered the title, or the author, though he figures in my reading of Charles Lamb, in the letters and elsewhere. Thomas Fuller is in that happy, somewhat hapless company of otherwise forgotten names, many from two or more centuries before Lamb's, so cherished and revered -- if never quite revived entire -- by that self-lettered little clerk. And here I have him then, in Wise Words & Quaint Counsels of Thomas Fuller, edited by a Victorian clergyman and minor essayist, Augustus Jessopp. How I came to have this broken little book was entirely by way of chance. It was left after a buy at the Used Books desk. It was so sorry looking a thing, I had passed it over, until I found it after, and thought to look a bit closer. Not that the book has any value in money. Even if it hadn't been so ramshackle, a clean copy's not worth much. Not much demand, I should think. This copy was from a school library: "Swansea Training College," the plate says. Nothing good ever came of school libraries, as everyone knows who's ever been in one. This had once been a handsome book, but now the front cover of this 1892 Clarendon copy was all but detached, the hinges, front and back were busted, the spine come away nearly, and a band poking out of the top. It was a sorry old wreck.
Something about that name though, Thomas Fuller, the Rev. Thomas Fuller no less, there a distant bell was wrung, and yes, a church bell. Famous once, and prolific, his reputation after his elevation from this wicked Earth resting on his, by all reports, excellent and yes, even witty Church History (!) and his more promising sounding, Worthies of England. Sure enough, Coleridge and his friend, Charles Lamb, were mentioned as having been enthusiasts of the old cleric's style. Fuller's dates -- 1608 to 1661 -- put him square in the Stuarts, First and Second Charles, which did nearly no one any good, Fuller included. I'd never read a word, so far as I can say, until now.
Jessopp does a great service to Fuller and the modern reader, and pulls the best and choicest morsels from what sounds too heavy a meal. Turns out, this dear old book is delightful! Lamb, again, proved right.
Meanwhile though, what book? What was before me was a text in tatters. And so to gluing. Elmer's Glue. Accept no substitutes. (I know there are those 'book repair kits" that are sold and that usually include some high-minded paper glue from the far orient or something like. Well and good. Elmer's Glue. Same thing, or near enough for my crude purposes of making a worthless, broken old book, readable. Anything more in the way of actual restoration? You take that, and a bank loan, to a proper bookbinder and go with God.) If there were enough scraps to be knit together, paper or cloth, glued they got. The spine I built back to something like it's first shape, and then, that's right, I glued it. put rubber bands around the thing until it healed, if it was ever going to. Takes about an hour, mostly.
Success! Enough, anyway to my purposes. And what, exactly might that be? Just to read these old books. What else? How else? The Fuller I might have reprinted on the bookstore's EBM, but as luck would have it, I looked at the Google preview and the copy that was copied is filthy with notes and underlining, whereas my copy, my stuck together with not so much as a kind thought from all the king's horses and all the king's men, my copy is clean, and if now even more so as to creaky hinges and stiff boards, well... a humble thing but now mine own.
That is the great thing I've found with desperate old books; with a stout bottle of Elmer's Glue, and rubber bands and a bit of patience, look much that might otherwise have been lost! Who cares if they look like Cuban cars? Miles left in them, miles.
Posted by usedbuyer 2.0 at 11:33 PM