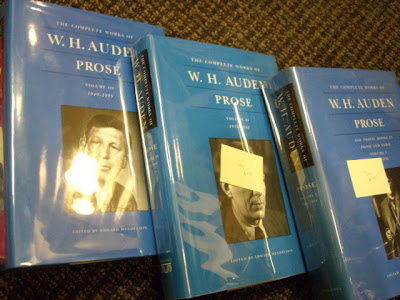 William Butler Yeats' came from some real money. His dad was a successful sort of society painter, but their money was older than that, and they had land. And, long before he became the distinguished English gentleman at Faber & Faber, T. S. Eliot could count on his dad and the Hydraulic-Press Brick Company of St, Louis, MO to keep him in bread and spats. Of the three biggest names in English poetry of the last century, it looks to me like only one of 'em, Wystan Hugh Auden, actually had to earn a living. (Among the major Americans in the same period, I count one medical doctor, a number of academics, and not a few bohemians with various day-jobs. It's not, I should think, until James Merrill that we get another leisured gentleman in modern American letters -- unless we count Cole Porter, and why not?) Not that W. H. Auden wasn't perfectly respectable at birth. Dad was a doctor. In the poet's footling youth, it seems safe to say, there wasn't much likelihood he'd have missed many meals, except by choice. Nevertheless, all his adult life Auden paid his way, and the rent, by writing. As someone once said, poetry, like crime, doesn't pay, so for Auden this meant magazine work; travel writing, essays and reviewing. Later in life came lectures, and eventually a comfy chair, but really, if you think about it, only Auden would seem to have been the only "working writer," in the sense of a literary journalist, among the 20th Century masters.

Don't really think of major modern poets having day jobs, but presumably they all did, and do these days. Most would be teachers, I should guess; professors if not of poetry as such, then of literature in general, or more nebulously now, of "writing." In the absence of "a private income" or rich patrons, it may have been so for a very long time, if not always. Homer, if he existed, and Virgil certainly, sang for their respective suppers. It's only when we get to the great Romantics that we begin to assume that Keats, for example, lived on air. Novelists may eventually keep the lights on by means of fiction -- though none of the ones I know personally do -- but poets? Hard to imagine.

It's only now, seeing the "collected prose" before me at the Used Books Desk, I begin to appreciate just how hard and for how long Auden wrote, and wrote, and wrote, and how much of what he wrote was straight-up paycheck-work. Not that that makes any of it less interesting or worthy. Not that I don't now kind of want to own and read the lot.

As it turns out, I have only the first volume of Auden's collect prose in my collection. I've bought and read various individual titles through the years: The Dyer's Hand, Secondary Worlds, etc. The first volume of Mendelson's magisterial edition I know I bought as a publisher's remainder, years back. Still has the mark. It has lived on my shelf, next to the collected verse, for years. Don't remember the last time I opened the book, though the poetry comes down often enough.

(Mendelson also wrote perhaps the best critical biography of Auden, in two volumes -- though both are so dry that a harsh wind might ignite them in the reader's hands.)

Now I think I must have the rest of Auden's prose. I've been exploring these books at lunch ever since they arrived. Full of good things, naturally, and enough of them to make the investment, at least in nice used copies, well worth the price. If for no other reason, reading through a dozen pieces in each has given me a new respect for just how much the poet read, and how widely, and how willing he was to read and review what wouldn't necessarily be books one might have imagined in the library of Wystan Hugh Auden.

Yes, the majority of his reviewing would seem to have been to do with poets and poetry. Doubtless, that was the first thing sent him by editors, but not the only thing he read. There are the Brothers Grimm, for instance, and Twain, and Santayana, and on and on. There's a fair amount on opera. There's also a contemporary review of Camus. There are also car-trips and philosophy and whatnot. One of the things that would seem to have made Auden American, as he spent a good part of his working life proving himself, one way and another, to be, was his willingness to take on just such culture as he found; to delight as much in hot dogs as hohe kultur. (The most fascinating instance of this unexpected openness actually comes from the volume of Libretti and Other Dramatic Writing. Didn't think I'd need to own that, or that I'd probably ever read much in it. A quick glance at the table of contents however produced "Appendix VI: Auden's Lyrics for 'Man of La Mancha.'" Now, how could I not want to know something more about that?! Turns out, Auden was hired and wrote more than a few songs for this show, despite a fundamental disagreement with the playwright about the adaptation -- first thing Auden told him to lose was that nonsense in the last act starting "To dream the impossible dream." And there, a sad end to the business, I should have thought. Still, here's the evidence of some real effort. There's even a story of Auden singing some of this for investors! Now that would have been interesting.)

Reading Auden's prose across his lifetime, rather than as discreet books, introductions or essays, does point up some of the less attractive aspects of his style and his thinking; his fascination with and dated vocabulary from psychoanalysis, the soft-soap-Anglicanism of his later years, and his tendency to gather wool in general. Eliot, who's major poetry I don't know that I will ever feel called on to reread, as an essayist remains perhaps the best critic of his generation. I needn't agree with Eliot to admire his essays. When I find myself disagreeing with Auden, it is generally because I can't make out even what it is he's trying to say. On the writing of poetry, on form and technique, Auden is a fascinating. He is perhaps the best informed, the best read poet of his time and his poetry criticism is invariably worthwhile, whether he's writing as a young man about Pope or as an older man about Marianne Moore. Unlike Eliot however, Auden would seem to have had no particular interest in criticism as a form, and even though both men regularly produced longer prose pieces and serious collections of essays and criticism, I can't quite tell you just what it was Auden intended. Auden's Christianity, for example, or rather his Anglicanism, isn't, not in any recognizable sense. Auden might better be understood as Christian the way Americans of later generations describe themselves as "spiritual." Like them, Auden often uses traditional religious language in ways that would seem to contradict or deny the more usual understanding of even such words as Christian; in Auden's definition a word utterly divorced from both doctrine and faith and entirely to do with the emulation of Christ. I think. Might not have that quite right, and frankly don't really much care, about any of it. There can be no such confusion with Eliot, though again...

It's a mistake to read poets for philosophy, or religion. That's the kind of thinking that would make Pound a better poet than any of 'em, and better certainly than he is to read, Shelley better than Keats because Shelley had politics, and Ginsberg a better poet at seventy than twenty-seven because he'd learned to chant. All very interesting, I'm sure, what Auden thought of Jesus, or Freud, but hardly why I would read Auden, to learn more about either.

What is interesting is reading more of what W. H. Auden -- who somewhere started a lecture on Don Quixote by boldly claiming he'd never finished the novel -- actually wrote about Don Quixote. What Auden wrote about Browning, now that can be interesting. Poets on poets can be quite interesting. And brief is good. With Auden's prose, it seems so far that brief is almost always better. It's his journalism, his straight reviewing then, I seem to find most attractive. I trust his taste. It was Auden after all who first introduced me to Marianne Moore, and Phyllis McGinley, among others. He knows a great poet, major or minor, when he sees one. I like him as a paid reviewer of books. There's just so much of it. I think I'd better buy these books, just to see what all is in them.
Posted by usedbuyer 2.0 at 9:03 PM