d'Artagan on the Dead End Road 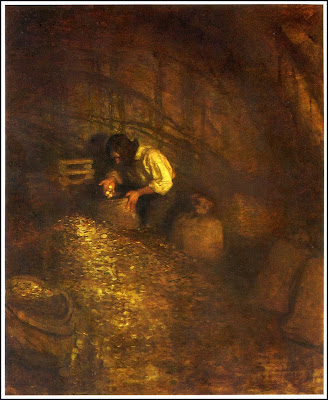 There's a famous passage in David Copperfield __ that most autobiographical favorite of the novelist's books -- in which the eponymous hero remembers time spent in his late father's library, his "refuge." When I found this passage again, in Quiller-Couch's Oxford Book of English Prose, I read it aloud here, for the pure plangent pleasure of it, and because it spoke to me of my own books, and the favorites of my own childhood. Of his father's books, David says, "They kept alive my fancy, and my hope of something beyond that place and time..." Just so.

The obvious and elsewhere acknowledged influence on Dickens of the books from "that blessed little room" has no doubt been much studied. The scholars may have at it. For me, as for the novelist, it is the memory of the friends met and made in good books, rather than always the the prose they stood up in, to which I have reason to recur. It is odd -- or perhaps it isn't -- how many works of fiction have in them Characters I have come to see as friends, of whom I have fond memories and the company of whom I still seek. David's list is long and happy: "Roderick Random, Peregrine Pickle, Humphrey Clinker, Tom Jones, the Vicar of Wakefield, Don Quixote, Gil Blas, and Robinson Crusoe... " I am now acquainted with all these famous fictitious gentlemen myself. (All that is but Lesage's hero, whom I have yet to meet, except in other company.) It must be admitted however that as a boy, unlike Dickens and his David, of these, I'd met all only Crusoe. Still, I had many such friends in my own childhood. Like Master Copperfield, I had only to look to my books to find familiar companions. Among my first friends I would number The Patchwork Girl, Huck & Jim, the Musketeers, Rat & Mole & Mr. Toad. The substance of these imaginary friends may be treated as having a reality not so much independent of the words and pictures from which they were made, I think, or even just in consequence of the genius of their making, but as characters in my own story. I traveled first to OZ, for example, in books borrowed from a neighbor, almost before I could read the words. I knew the characters by sight, from the marvelous illustrations of W. W. Denslow and the great John R. Neill. By the time the conversation and adventures of these remarkable people opened to me, I already knew them all, or nearly all, by sight. The Musketeers were as real to me from first acquittance as any friends made at school and if anything, better and more loyal company. (This is no reflection on the friends I had, from school, and the Scouts, the Grange and so on. We lived just far enough in the country that I could not always go to friends as easily as all that, at least until I was old enough to ride my bike the four miles into town.) I have memories of myself -- at nine, would it have been? -- exploring Crusoe's island, through hay-fields, and down among the tall reeds and cattails, by the creek. (Friday, now I come to think of it, was probably the first black man I ever knew. Huck's Jim, the second.)

How and when, for example, one first makes the acquaintance of Betsey Trottwood and Mr. Dick, or of Huck Finn, for that matter, colors ever after the pleasure of each new encounter, just as it would meeting again some memorable personage or bosom friend from childhood, whatever revolutions may have been made in or around us between. As Selden said -- first? -- "Old friends are best", but, in fairness, it might be better to say our memories may be kindest the longer they last. Only the friends who have stood by us and come back to us much as we remember them: just as much fun, just as dear, just as funny, may be said to be true, no matter where we find them again.

I was reminded of this, reading Thackeray a few months back, in an essay of his, a review really, called "A Box of Novels." In it, Thackeray blasts away at various now forgotten targets, all new books of the day, but then he gets to "Boz." The argument is made that the best literature is written not for posterity, or what Thackeray calls "futurity"; that dimly anticipated review of "big-wigs" who are always sure to decide such matters, and like as not get them wrong, but rather, Thackeray argues persuasively enough, the best literature is made just to please the audience for whom the writer writes; addressing not the reviewers or the academics, but the reader. As Thackeray reminds us, irrespective of critical analysis or complaint, a new book, as even Dickens' A Christmas Carol was in 1844, may speak so persuasively to the hearts of it's first readers as to be sure of readers ever thereafter. Thackeray knew a classic when he saw it (and was willing to endorse Dickens' little Christmas book as such, despite whatever rivalry he might have felt with its author. Good man.)

I decided this year not to bring favorites from my childhood with me, as I did the last time home to Pennsylvania. At least two or three of the books I did bring, I've read before, and some a very long time ago, but none from childhood or with any special association with "home." No Dickens this time, and no Twain. Nevertheless, I wonder, being back now in my parents' house, in what was my old bedroom, looking out what was my window to the fields and forests of my childhood, I might not meet with old friends anyway.

When I got home and settled after a ridiculously long day in airports and on the road, I went for a little walk about in the neighborhood, if so empty a spot can be called that, and strolled up to the dead end road above where my parents live. The weeds on either side of the blacktop are taller than I am. No great thing, even in a weed to be taller than me. Still, for a moment in the fading light of the early evening, I was reminded what it was to be but only so high in relation to the world around. When I'd walked down over the slope of the road, nearly to where it ends, I thought I might just find such a one as d'Artagnan striding through the reeds, his friends coming up beside him.

"They walked arm in arm, occupying the whole width of the street and taking in every Musketeer they met, so that in the end it became a triumphal march. The heart of D’Artagnan swam in delirium; he marched between Athos and Porthos, pressing them tenderly."

As I walked back, as the grass moved in the breeze, I might have seen Hugh Lofting's Dr. Dolittle with Polynesia on his shoulder, the Pushmi-pullyu walking, one way or the other behind him. Howard Pyle's Arthur might have come riding out of the woods behind my father's pasture fields.

The point of all this fantastic meandering, if there needs to be one, is that all these characters are still very real to me, even without the books immediately to hand. Sadly, they are not perhaps as real to me as they were when I first made their acquaintance in these places, but they are real to me still. Nothing I may have read about, say, Dickens or Twain, no critical explanation of the style or power of their books, made the people in those books either more or less real to me since. I just got older. Things take longer now for me to do; my reading is slower now and I like to think, more deliberate. Maybe, maybe not. My imagination, certainly, takes more effort to work. But I only have to see the tree I sat under to read the book, to see N. C. Wyeth's picture of Long John Silver. "To me he was unweariedly kind..."

Now, though I'm happy with all the books I brought with me, I rather wish I'd had Treasure Island to read under that tree, or had The Three Musketeers with me tonight in the weeds to read, at least until Mum called me in for supper.
Posted by usedbuyer 2.0 at 9:01 PM