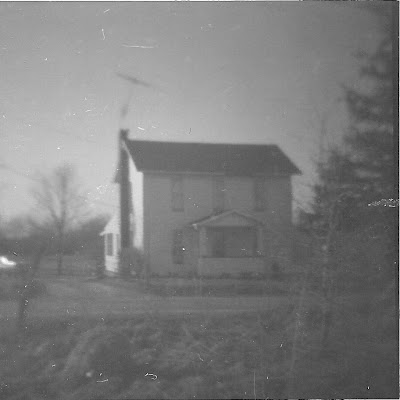 That's the old family house and homestead above, in a photo I took as a kid. Hasn't changed much. There are more and bigger trees now. Otherwise? Dish instead of aerial. Still no bookstore back thereabouts though. Been tried a few time over the years, but never took for very long. Not bookish people back there really. Not so's you'd know, anyway. That means carrying my own books when I go back.

The idea is to have options once I'm there. It's not like I'll have much time to myself. I never do when I'm back home. There to visit, after all, not to just sit under a tree and read. Still, there is always a chance of that, too. There'll be nobody there this time but my folks, and my brother across the way. My husband's been and back to Pennsylvania this year already. He went in July, when I couldn't manage it by the bookstore's schedule. My sister was up from Texas already too, with one of the nephews, and so I've missed them as well. Should be then a pretty quiet visit, as visits go. Still, when I read, it will probably be in the mornings, or what now passes for the morning in my parents' house; can take quite a time to get up and stirring anymore, which is fine by me. Generally, my father will be up and breakfast ready before either my mother or me. At some point, out of boredom no doubt, he'll be off to buy a paper and a lottery ticket, maybe the day's groceries, while my mother's still getting ready for the day. After I've showered and before she's ready, I'll have an hour or so in which to read. Last thing at night, after I've retired to my own room, I'll read for awhile as well. I can count on that. That'll be about it, for reading, though I know that there are always unexpected minutes, even hours, when I will find a book good company.

So I've scouted out some old, cheap paperbacks to take with me. I always try to travel with books I intend to leave behind. Seems safest to not have anything with me I should miss. I like old paperbacks anyway; meaning anything with a price on it of less than a dollar and perhaps a cover I actually remember from the first time I read the book, if I have done. The Agatha Christie I found, I probably have read. Pretty sure I read all or nearly all of Miss Marple. Luckily though, I would seem to be entering those middle years when it seems to matter very little -- at least with mysteries -- if I've read them already or not. A Pocket Full of Rye certainly sounds like something I should have read twenty years ago or more when I was reading Christie from every yard-sale where I could find her. The quoted reviews seem to suggest that this is among her best. Well, before I packed it, I read up to the first murder and none of it is remotely familiar, even from television Marples, so into the bag it goes. I've got magazines for the flight, and even though it is a red-eye, I may start the Christie before I get to Pennsylvania. Such fun.

Also in the pure fun category, I've picked up an Eric Ambler, Background to Danger, a.k.a. Uncommon Danger. Never read this one, though with Ambler's formula it isn't always easy to tell what one may or may not have read. Basically some relatively innocent fellow gets tangled with spies. This time, it's a journalist down on his luck. What makes Ambler satisfying still is first how cleverly he incorporated the actual politics of the day (this novel having been written and set just before the start of the Second World War) and a perfect British sangfroid, much copied I should think by later writers like Ian Fleming and John le Carré. (To what extent the perfect gentleman spy was the invention of Maugham and the rest rather than an actual fact, I'm not prepared to theorize. Don't much care. I just like how such stories read, specially when I'm on vacation.)

For something of a more serious quality, I found an old double reissue of Evelyn Waugh, with both A Handful of Dust and Decline and Fall in one fat little paperback. There's an excellent movie of "Dust" from a few years ago, and between that and having read the book when I was reading through most of Waugh, I've never thought to reread it. However, my growing curiosity to read anything other writers might have had to say or write about Dickens has had me thinking about this particular novel lately. Anyone who's read the book, or seen the movie, will remember that the novels of Charles Dickens figure rather prominently, and devilishly, in the second half of Waugh's book. Not perhaps the most flattering portrait of a Dickens enthusiast, but an important one. If for no other reason then, I thought about packing this book. I read the first chapter and was reminded just how good it is. Likewise, Decline & Fall, which I know I haven't read in close to thirty years. Very different book; earlier and more obviously silly, but all the better for that when paired with such a more serious later novel. Into my bag the book goes.

Finally, having searched high and low for a used paperback of Trollope and finding nothing but Barchesters I don't wish to read again so soon, I finally settled on taking my Oxford hardcover copy of The Small House at Allington just because I've wanted to get back and finish all the Barchester books for a very long time now and never got to this one, the one with the marvelous Lilly Dale. Breaking my own rule then about only taking books I'm perfectly content to leave in an airplane, I carefully packed this one at the bottom of the bag, so as not to lose it easily. Maybe by the time I'm flying home, I'll have it out to read on the plane. By then though, I ought to be done with the others.

There aren't that many calls to make anymore when I go "home." Simplifies my schedule while I'm there. And, it gives me a little more time to read. About 650 pages to that Trollope, so we'll see. Not a lot else to do there, come the quiet. That's just fine, mind you.
Posted by usedbuyer 2.0 at 10:52 PM