Clippings Saved, for now, from Burning 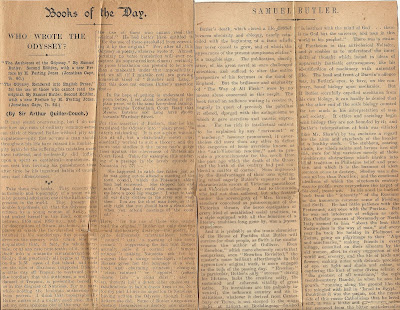 When we moved into our present house, I was finally able to have all my books out of boxes. It is a big house, certainly the biggest in which I had ever come to live, and I had a room, for the first time, large enough for a library. I had fine new pine shelves, purchased from a used bookstore going regrettably but conveniently out of business at just the right time, and having painted and put these up, I made a space worthy of the word. It was an exhilarating moment. To see not just my familiars finally shelved in order for the first time, but to find forgotten friends, to reunite scattered volumes, to rank my sets in line... it was an exhilarating week. My library, such as it was or will ever be, had at last found a home. There were, however, more books than I remembered packing. Some, frankly, were completely new to me. When had I purchased this? Where had I come across that? Why on earth had I felt the need of her and when exactly had I planned to read him? And just who the hell was this? So for all the pleasure of those days I spent unpacking and arranging my books, there was some considerable confusion, even consternation as well. I found myself sorting, in ever bigger piles, books I could not imagine my reasons for having bought, books I had no memory of ever owning, and books I had no intention of keeping. These kept stacking up and up in one corner of the room until I might address them later. When I finally did, most went back directly into the boxes from which they'd only just been taken, some for what seemed to be the first time, as if they'd been an unwanted gift from the faeries. Most of these have long since been sold off or thrown out.

The next problem pile to be addressed was less complicated, but more embarrassing. Even someone as forgetful -- and greedy --as I am could not help but be taken aback by the inordinate number of duplicate titles. Worse was realizing just how many of these had gone unread in any and all of the editions in which I'd bought them over the years. I always, or almost always, buy books with the intention, however fleeting, of reading my way right through-- at least I used to. These books went the way of the unwanted as well.

Finally, what was perhaps most shocking when I came to sort and organize my library, was a whole bonfire's worth of receipts, bookmarks, notes and ephemera, pulled from nearly all my books; read and unread, wanted and not. I never meant to clutter so many pages with so much trash. I certainly didn't intend to sell books crammed with snapshots and magazine-subscription-cards, torn sheets of newsprint and the like. And I knew enough, as a used books dealer, not to let all this inferior paper sit and brown the pages of my books. I should hope by now I know better than that.

What is usually called "ephemera" in the trade,comes to us just this way; forgotten between the pages of a book. Most of these bits and pieces are there as bookmarks, not the kind provided as promotion from the seller, but taken up from a desk or a nightstand as convenient to the moment, used to save one's place, and then forgotten when the book is put down or done with altogether. Reviewing my own books, it seems I was as guilty of doing this as the next person, even though, if anyone, I ought to know better. You see, most of the scraps we put in books to hold our place are printed on paper inferior to that from which the book was made; acids and inks and all manner of unpleasant chemicals that do no harm in our daily encounters with them, if left between the pages of a good book, may discolor and even destroy the book in which they have been abandoned. Likewise all the little Post-It notes, rubber-bands, paperclips and other detritus readers tend to forget having added to the text. As a bookseller, All this trash gets tossed, unless it is old enough, and interesting enough of itself to be sold as a curiosity. Old theater programs and tickets, stray illustrations detached from their books, even family photographs, can become "ephemera" to the dealer, once the stuff's been slipped into a Mylar bag and had a price-tag slapped on it. All well and good, but for the most part, what we leave in books is just so much stray paper. Cleaning up my books, I myself filled a large trash bag with the stuff, and other than a school-photo of a nephew here and there, and a single twenty dollar bill -- such luck! -- there was nothing in the stuff I shook loose from my books that was worth keeping.

There are things slipped into books intentionally by the owner, things meant to add to their value, at least for that first reader. These most often consist of newspaper clippings; a review of the book, or an original advertisement of the publication, but sometimes an obituary of the author. Nothing, as it turns out, that one could slip into a book is likelier to damage the pages than a newspaper; as the newspaper yellows and disintegrates, the pages of the book are infected and do likewise. As a bookseller of used books, I hate newspaper clippings.

Above, please note not one, but two clippings discovered smack in the middle of my recently purchased copy of The Note Books of Samuel Butler. Both would seem to be from The London Times. The one on the left is indeed from some time after Butler's death, and while not an actual obituary, is clearly a valedictory published some time not long after the posthumous publication of Butler's greatest and most lasting book, his autobiographical novel, The Way of All Flesh. If I were to recommend nothing else written by Butler, I can heartily recommend this. No book other than Lytton Strachey's Eminent Victorians probably did more to undermine the smug assumptions of perfect Victorian piety and virtue than Butler's novel, and like Strachey's, Butler's book can still be read with delight as one of the greatest examples of invective in English literature. It was heartening reading this notice, by the otherwise unidentified, "C. H. H.," to see that even in what was probably pretty close to the novel's own day, it and it's author were already much appreciated as exceptionally worthy of memorialization. The article is charming. I'm keeping it -- though not in the book.

The second clipping is a review, by no less a Grand Old Man of Letters than Helene Hanff's own "Q" -- Sir Arthur Quiller-Couch -- of Butler's prose version of Homer's Odyssey, and of Butler's eccentric book theorizing the authorship of same, The Authoress of The Odyssey, in which Butler set out to prove that Homer was in fact, a woman. I haven't read either Butler's Homer, or his book on the lady who wrote it, but reading through Quiller-Couch's review, I think now that I might have to get me a reprint of the latter to go with a cheap used copy of the former and have a go.

So I'm keeping that clipping too.

I'll keep both in a nice, clean folder, in my filing cabinet, well away from the book, so as to avoid the clippings doing anymore mischief to the book.

So, yes, even I can appreciate something wonderful and old found slipped between the pages of an old book. This doesn't mean that I wasn't right to take them out, anymore than I was wrong to throw away all that junk I'd stuffed into books myself. Just means I've developed a more selective judgement when it comes to my personal pack-ratting, is all.

And a filing cabinet, for any like me who might want this kind of thing to hand hereafter, is an important feature in any private library. (One's heirs can burn the stuff just as easily... after.)
Posted by usedbuyer 2.0 at 11:29 PM