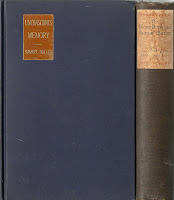 Down the street to another used bookstore at lunch today for a quick gab and a look around. Seems the buying desk has been humming there as well of late. Now where I work, we have discreet shelves for the incoming books, a case for the recent arrivals, and carts that get wheeled off every couple of days to their respective areas of the sales floor. This is not the usual way with used books. Most places are considerably smaller than the one in which I work, and buying books more usually means making great, undifferentiated piles on a table or the floor, to be priced and sorted as best can be later, so that what's been bought first can look unlikely to ever rise out of the chaos, but it does, you must trust me, it does. The buyers know, or like to think we do, and it is remarkable, even in a tight corner, just how quickly and with what accuracy books get cleaned, priced and shelved in even the most seemingly random looking space. There are days though when I would defy even the most experienced and best organized dealers to tell me just what is on those heavily freighted tables. The sight of such seemingly random books piled so high, sorted if at all still only by the price paid or by the buy, draws the bibliophile like a fat man to a baker's truck:

What ya got in there, friend?

Being in the trade, I've learned to respect the apparently unsorted order of unpriced books. Few things one might do in a used books shop are as likely to cause bad feeling as failure to respect the integrity of a buyer's heap. Even just turning one stack ever so slightly, just to have a quick peek at what's behind it can mess with the delicate arrangement of things, or worse, cause the whole barely balanced mass to come shuddering down. We're not architects, we aren't likely to have calibrated the stresses carefully or considered the potential consequences of putting the ten pound dictionary on top of all those slippery paperbacks. It's busy. There are still boxes to be got through. Time is of the essence. These are not yet for sale. These are certainly not yet your books, people, and they may not yet even be ours.

Don't be mucking about.

The urge to at least circle such a stack though, that's just irresistible, isn't it?

Even as I'm chatting away with the harried owner, trying to eat her cold lunch at the cash register, my eyes are drawn to what I may not yet buy. Can't be helped. What's worse, having found not one, but two reasonably priced little volumes of Samuel Butler already out on the recent arrivals shelves, I am easily convinced that there must be others in the joint. Stands to reason, at least when already fevered by my find. One might ask, of course.

"Any more Samuel Butler, you think?"

The perfectly sensible answer, the expected and understandably bemused, even sympathetically gentle response is, well... no. What, after all, were the odds of finding The Notebooks of Samuel Butler, and for just eight bucks, yet? What then the likelihood, having found that book, that I should then spot Unconscious Memory -- less exciting but Butler still -- for only seven dollars, on another shelf entirely?! It is finding that second title in the same shop on the same day that actually produces the febrile delusion that all of Butler must be somewhere near to hand, like in that buyer's muddle on the back table. I'm sure of it. These two little books clearly came from the same owner. Stands to reason, he or she had others, doesn't it? And if my friend the shopkeeper bought these, she must have bought the rest. Just hasn't got to them yet. Must be there somewhere. Can't expect her to remember every book. Maybe, now we're done discussing the season and the general hectic madness of the day, maybe if I just drift back there, and just give it one more quick scrutinizing pass, now I know what I'm looking for specifically, no harm in that, is there? There are books on that table that had I to guess I'm sure came from the same source. Must be, down there, near the bottom. Were I, very carefully, with all due respect, you understand, to just tilt this one tower, just nudge it a bit that way...

But I am not going to be that annoyance. I'm not. Not today, anyway. I'm better than that.

Instead, I buy the two I've found and am grateful. I am however unreasonably discontented with the purchase, naturally, though it rather made my day all of ten minutes before. I walk back up the alley, already late coming back from my lunch, convinced, still, somewhere in those other books, on that table, there is something... more.

Despite the owner's smiling acknowledgement of the obvious when asked if she was quite sure these were the only two volumes of Samuel Butler she'd purchased recently, I remain obstinately unconvinced. What if someone sees them in the pile tomorrow and gets to them before me?

"Who else," she asks me, "do you think, is looking for Samuel Butler?"

(I just know She's got Shakespeare's Sonnets Reconsidered in there somewhere, damn it.)
Posted by usedbuyer 2.0 at 11:53 PM