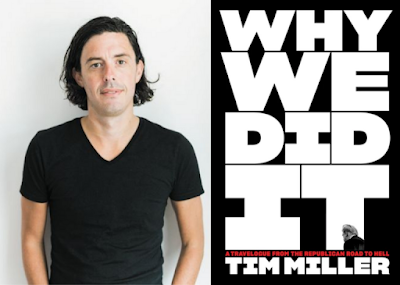 This is Tim Miller. Tim Miller has a regular gig now on MSNBC. He’s written for Rolling Stone, and Playboy, and he’s a contributor to The Bulwark and The Ringer. He was just on NPR’s Fresh Air to promote his new book, Why We Did It: A Travelogue from the Republican Road to Hell. It came out, without intentional irony in June, Pride Month, from Harper Collins. It’s already on the NYT bestsellers list. He lives in Oakland now with his husband and their kid. He was raised a Catholic, went to a Jesuit high school and graduated from George Washington University.  Smart guy.

Tim Miller was a Republican political consultant and co-founder of America Rising, an opposition research group targeting Democrats. He worked for the campaigns of John McCain, Jeb Bush, Mitt Romney. He worked for the Republican National Committee. He’s also been a loud Never Trumper who worked a little bit for Trump folk, but he wants us to know he’s really bummed about it now.

Tim Miller is part of a long history of gay white dudes who worked for the Republican Party (read James Kirchick’s Secret City: The History of Gay Washington.) Whitaker Chambers, Roy Cohn, that men’s room toe-tapper, they’ve always been there. Miller is also part of a long tradition of reformed quislings, Mel White, Andrew Sullivan, David Brock, who made their names working for conservative and neo-con causes. Some like Miller admit to promoting a specifically homophobic, misogynistic, racist, and violently anti-progressive agenda and then they saw the error of their ways, or just their mistakes, and wrote a book explaining how sorry they are now, or not. Some, like Mel White even seemed sincere.

One of the unique features of the LGBTQ+ community has always been the idea of Coming Out, and specifically that everyone does this at his, her, or their own pace and in their own way. Everybody has a past, a place we came from, an individual journey. We’re taught not to judge other people for not all getting to the same place at the same time or in the same way. It’s a good thing. (Forgiveness isn’t the same thing. That’s largely an individual choice and more of a religious concept.)

And now here’s Tim Miller. Another smug fuck who still can’t quite bring himself to denounce the conservatism that gave him his career and made him a minor celebrity in some of the creepiest, smarmiest political circles in America. Yeah, he hates Trump. Yeah, he admits to helping create the culture that resulted in Trump. His book might just as easily have been titled “My Bad.” But listening to him on the radio, it was pretty clear he still gets a little wood talking about the bad ol’ days when he was fucking over Democrats and writing copy on the sly for fascist websites. He clearly loved being considered a player, someone who “got it,” which was political consultant speak for effective chicanery and the excuse for ethical indifference.

The thing that irritates me right now isn’t that Tim Miller is yet another gay man who’s career recklessly and genuinely hurt other gay people. It isn’t, or rather it isn’t just that he has never really come the whole way out of his conservatism (presumably because then he’d just be, I don’t know what, another anonymous Democrat?) What really puts my teeth on edge when I listen to Tim Miller is how representative he is as yet another white dude who mistakes his personal awakening for revelation.

He’s decided, has our Tim, not to be a completely reprehensible, amoral piece of shit anymore. Good for you, Tim. I mean that. The world’s a better place for it, in a very small but very real way. But when the interviewer asks him, what should we all do now? Poor Tim. Not a clue. All this time to work something up, put something together if just for the book tour, but Tim’s got nothing. He readily admits to having been caught a bit short trying to come up with the uplift for that last chapter. Haven’t given it much thought since either, have we, Tim? Not quite the mystery you’ve made it out to be, Mr. Miller.

Seems he thought he’d done quite enough, thank you. Look it, he kind of apologized, he talks trash now about the Orange Dumpster Fire instead of, you know, Democrats. The man wrote a book, for God’s sake! What more can he possibly do?!

And there’s the problem, isn’t it? Tim Miller hasn’t said anything, has he? Did he really tell us anything we did not already know years ago? Do we really learn anything from his book or his interviews with his old friends, or from his new haircut? What we learn is that Tim Miller hasn’t anything much to say. What Tim Miller did for a living is still what Tim Miller does for a living. He hasn’t changed, he’s just changed his aim. And yes, at least now he’s firing at the right target, but are we meant to congratulate him for this? Are we meant to admire that the man who “got it” all those years in Washington seems to finally get that he was wrong? That’s great, but is that it? As Peggy Lee famously sang, “Is That All There Is?”

It seems he was so busy learning to drive, he never bothered to look where he was going. That grinding noise you hear is poor Tim trying to find a new gear and failing.

Do I think he should be working in a soup kitchen instead of chatting on MSNBC? Wouldn’t do him any harm. Me either. What I think he might have done before he wrote a book and took it on tour was think. Okay, you regret this, and you decided that was wrong, and you talked to other people who hate paper straws. Maybe read a book without checking the index for your name? Maybe consider what else might be bullshit besides Trump? Any other powerful institutions besides the Republican Party that might not be good for gay people? Maybe talk to someone who doesn’t get the nails done once a week, or earn consulting fees, or go on tv, or have the option to stop cutting their hair and keep their job. Maybe explore how other people aren’t trying to reclaim conservatism but fight it? Maybe go to a Pride parade without expecting to be grand marshal that first year.  Maybe ask people who still believe in the future what they’re doing to bring it about. Maybe work on that, and then get back to us.